Severe rainfalls triggered deadly floods across the South and North Carolina over the weekend of October 3, 2015. At least 9 people have died in flood related incidents in South Carolina, and hundreds of people were left stranded by the raging waters all over the states. More rainfall has been forecasted for the already soaked areas, as of October 5, however relief is now in sight, as the extreme weather conditions will most likely cease by October 6.

Unprecedented catastrophic flooding has hit the US East Coast, as of October 3. The rains across the area started on September 26, while extreme weather conditions were produced by an interaction between a mainland front and Hurricane "Joaquin" which was continually infusing the front with abundant tropical moisture from the Atlantic.

A "fire hose" of tropical moisture, also known as an atmospheric river, has doused the Carolinas in record rainfall and triggered life-threatening flash floods. This water vapor loop, showing the content of water in the atmosphere, shows Hurricane Joaquin bypassing the US after pounding the Bahamas and a separate area of low pressure spinning across the Southeast US that helped stream historically heavy rainfall inland. This imagery is from GOES East from October 1 to October 5, 2015.

NASA/JAXA's GPM satellite measured record rainfall that fell over the Carolinas from September 26 to October 5 from a plume of moisture from Hurricane Joaquin when it was located over the Bahamas and moved to Bermuda. The IMERG showed highest rainfall totals near 1,000 mm (39.3 inches) in a small area of South Carolina and rainfall between 700 and 900 mm (27.5 and 37.4 inches) over a large area of South Carolina. Credits: SSAI/NASA/JAXA, Hal Pierce 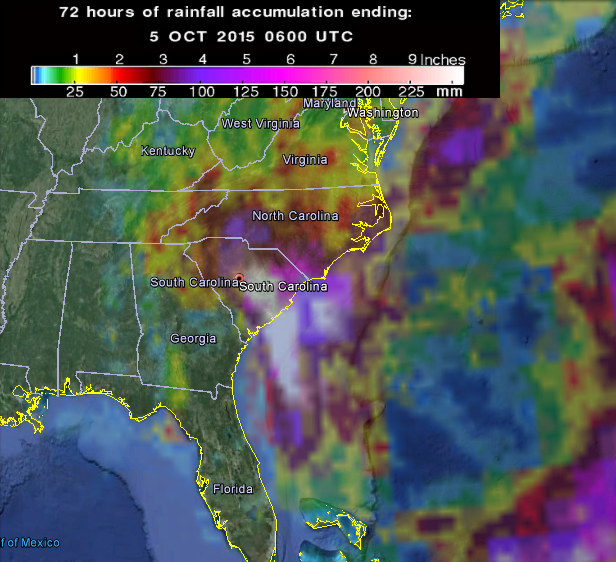 Violent flooding waters have swept large parts of Carolinas, where several historic records have been broken by the event. The worst hit areas include Charleston and Columbia, where entire streets and roads were immersed in flooding waters.

Rescue teams performed hundreds of rescues across the affected areas, as cars got stranded in floods and homes inundated. "Move to higher ground now. This is an extremely dangerous and life-threatening situation", the National Weather Service (NWS) declared in a flash flood statement in Charleston on October 4.

It will most likely take a couple of weeks to assess all the damage that floods have caused, according to the officials.

Over 508 mm (20 inches) of rain has been recorded across parts of South Carolina, media reports. The highest recorded amount of precipitation so far is 682.3 mm (26.9 inches) near Boone Hall Plantation in the Mount Pleasant region.

550.2 mm (21.7 inches) of rainfall was measured by the Weather Underground rain gauge in Dalzell, South Carolina, on October 4. So far, the highest recorded precipitation amount in a 24 hour interval was 375.9 mm (14.8 inches) brought to the shores by Hurricane "Floyd" in Myrtle Beach, on September 16, 1999.

#Historic #flooding has #caskets #floating to the #surface in #South #Carolina http://t.co/fNsGNgbX3M pic.twitter.com/Od9iYd8WTS

A landslide that occurred on October 3, blocked a road adjacent to Old Fort, North Carolina while strong wind gusts and heavy rainfalls uprooted trees across South Carolina and northeast Georgia.

A weather patch abundant in tropical moisture from the Hurricane "Joaquin" in the Atlantic will continue to feed the bands of heavy rainfall across the coasts of Carolinas through October 5. Meteorologists forecast another 127 mm (5 inches) of rainfall are possible to fall through the day.

Flash flood warnings remain in effect for parts of southeast North Carolina and northeast South Carolina, as of October 5.

Wind advisories remain in effect on October 5, throughout the Carolinas. Strong wind gusts in combination with the predicted rainfall could potentially uproot more trees across the affected areas.

The rainstorms are expected to stop across the US East Coast by October 6.