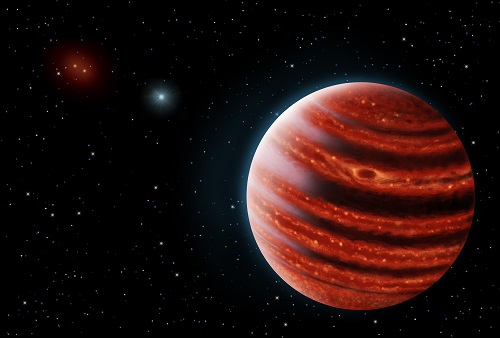 Astronomers have imaged a new world of a young Jupiter in unprecedented details, using the Gemini Observatory's new Planet Imager (GPI). They discovered the planet's mass is about twice the Jupiter's, and it seems the planet is the most Solar System-like planet ever directly imaged orbiting another star.

The planet 51 Eridani b, orbits a star 100 light years away, equivalent to being located in a place between Saturn and Uranus which is about 13 times the Earth-Sun distance. The data gathered by the research gave scientists the strongest spectroscopic methane detection in the atmosphere of a planet outside of our Solar System.​

"Many of the exoplanets astronomers have imaged before have atmospheres that look like very cool stars" said Bruce Macintosh, of Stanford University who led the construction of GPI and now leads the planet-hunting survey. "This one looks like a planet."

"This superb result is a clear demonstration of the remarkable imaging and spectroscopic capabilities of GPI," said Chris Davis, the US National Science Foundation (NSF) Astronomy Division program officer who oversees Gemini Observatory funding. "The exoplanet surveys now possible with Gemini will undoubtedly lead to a far better understanding of the numbers of gas giants orbiting neighboring stars, the characteristics of their atmospheres, and ultimately the way in which giant planets like Jupiter and Saturn are formed." 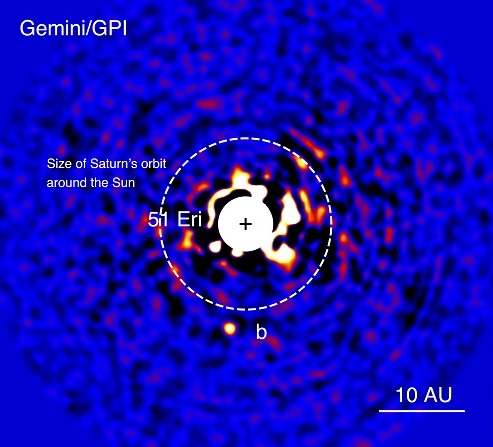 51 Eridani is only 20 million years old planet, which is a fact that enabled it's direct detection. When planets coalesce, material falling into the planet releases energy and heats it up. Over the next hundred million years they radiate that energy away, mostly as infrared light, and gradually cool.

The planet is probably the lowest-mass planet ever imaged, it's temperature is – 430 ºC (- 800 ºF) and it gives away the strongest spectroscopic atmospheric methane signal, similar to the heavy methane dominated atmospheres of the gas giants in our Solar System.

This discovery is a part of the so-called GPI Exoplanet Survey (GPIES), a broader effort in finding and investigating new planets. So far, the survey inspected almost 100 stars suspected to host planetary systems, and is expected to investigate over 600 stars in total.

GPIES has currently surveyed less than 20% of its target planets. The targets were selected based on their youth and proximity to our Solar System (within about 300 light years). The research results are expected to be outstanding, as it's goal is to provide the first detailed census and demography of gas giant exoplanets, to find several multi-planet systems, and to perform detailed spectral characterization of many new exoplanets.

"This is exactly the kind of system we envisioned discovering when we designed GPI", says James Graham, professor at UC Berkeley and Project Scientist for GPI.

GPI Instrument Scientist, Fredrik Rantakyro, said "Since I was a child, I dreamed about planets around other stars and the possible lives that could be out there. As an astronomer, it's common to work with state-of-the-art telescopes but not to make your heart beat faster. This is exactly what happened with this dream-come-true discovery of this brother to Jupiter!"