A temperate Earth-sized planet has been discovered only 11 light-years from the Solar System by a team using ESO’s unique planet-hunting HARPS instrument.

The new world has the designation Ross 128 b and is now the second-closest temperate planet to be detected after Proxima b. It is also the closest planet to be discovered orbiting an inactive red dwarf star, which may increase the likelihood that this planet could potentially sustain life. Ross 128 b will be a prime target for ESO’s Extremely Large Telescope, which will be able to search for biomarkers in the planet's atmosphere. 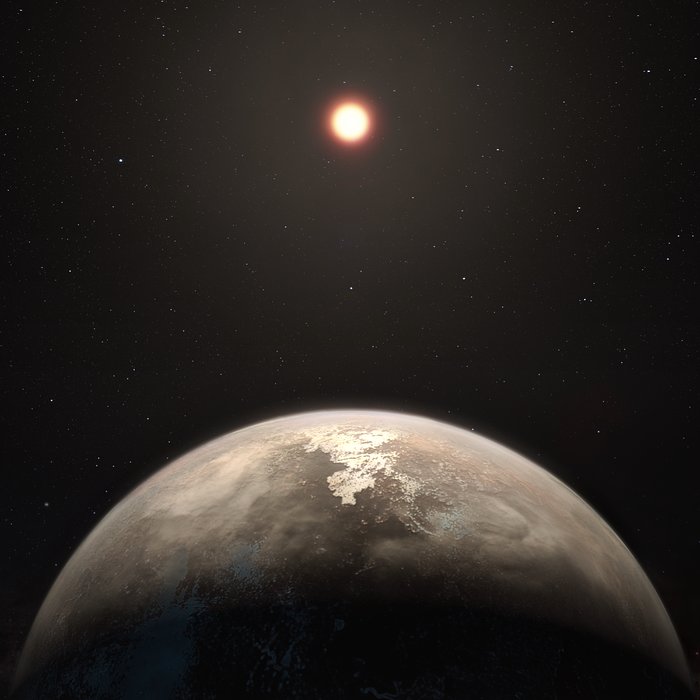 This artist’s impression shows the temperate planet Ross 128 b, with its red dwarf parent star in the background. This planet, which lies only 11 light-years from Earth, was found by a team using ESO’s unique planet-hunting HARPS instrument. The new world is now the second-closest temperate planet to be detected after Proxima b. It is also the closest planet to be discovered orbiting an inactive red dwarf star, which may increase the likelihood that this planet could potentially sustain life. Ross 128 b will be a prime target for ESO’s Extremely Large Telescope, which will be able to search for biomarkers in the planet's atmosphere. Credit: ESO/M. Kornmesser

A team working with ESO’s High Accuracy Radial velocity Planet Searcher (HARPS) at the La Silla Observatory in Chile has found that the red dwarf star Ross 128 is orbited by a low-mass exoplanet every 9.9 days. This Earth-sized world is expected to be temperate, with a surface temperature that may also be close to that of the Earth. Ross 128 is the "quietest" nearby star to host such a temperate exoplanet.

"This discovery is based on more than a decade of HARPS intensive monitoring together with state-of-the-art data reduction and analysis techniques. Only HARPS has demonstrated such a precision and it remains the best planet hunter of its kind, 15 years after it began operations," explains Nicola Astudillo-Defru (Geneva Observatory – University of Geneva, Switzerland), who co-authored the discovery paper. 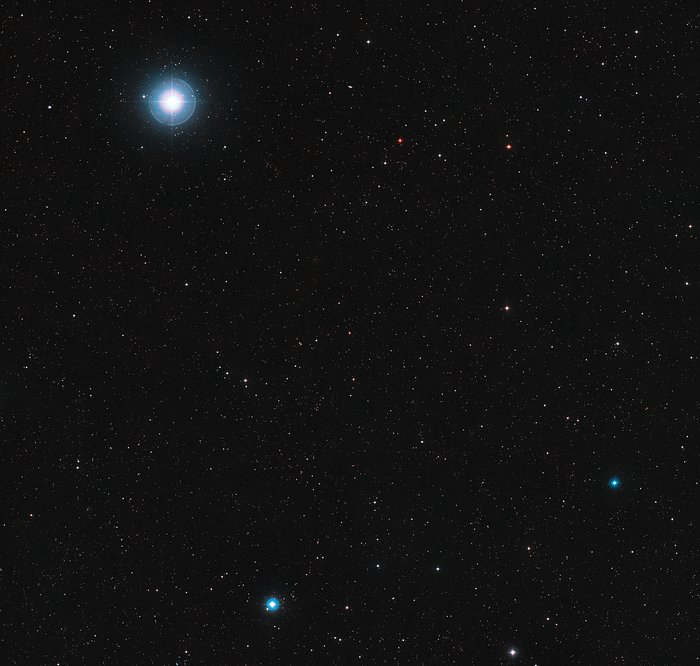 This image shows the sky around the red dwarf star Ross 128 in the constellation of Virgo (The Virgin). It was created from images forming part of the Digitized Sky Survey 2. Ross 128 appears at the center of the picture. Close inspection reveals that Ross 128 has a strange multiple appearances as this image was created from photographs taken over a more than forty year period, and the star, which is only 11 light-years from Earth, moved across the sky significantly during this time. Ross 128 is a "quiet" red dwarf star and is orbited by Ross 128 b, an exoplanet with a similar mass and temperature to the Earth. Credit: Digitized Sky Survey 2. Acknowledgement: Davide De Martin

Red dwarfs are some of the coolest, faintest — and most common — stars in the Universe. This makes them very good targets in the search for exoplanets and so they are increasingly being studied. In fact, lead author Xavier Bonfils (Institut de Planétologie et d'Astrophysique de Grenoble – Université Grenoble-Alpes/CNRS, Grenoble, France), named their HARPS programme The shortcut to happiness, as it is easier to detect small cool siblings of Earth around these stars, than around stars more similar to the Sun [1].

Many red dwarf stars, including Proxima Centauri, are subject to flares that occasionally bathe their orbiting planets in deadly ultraviolet and X-ray radiation. However, it seems that Ross 128 is a much quieter star, and so its planets may be the closest known comfortable abode for possible life.

Although it is currently 11 light-years from Earth, Ross 128 is moving towards us and is expected to become our nearest stellar neighbor in just 79 000 years — a blink of the eye in cosmic terms. Ross 128 b will by then take the crown from Proxima b and become the closest exoplanet to Earth! 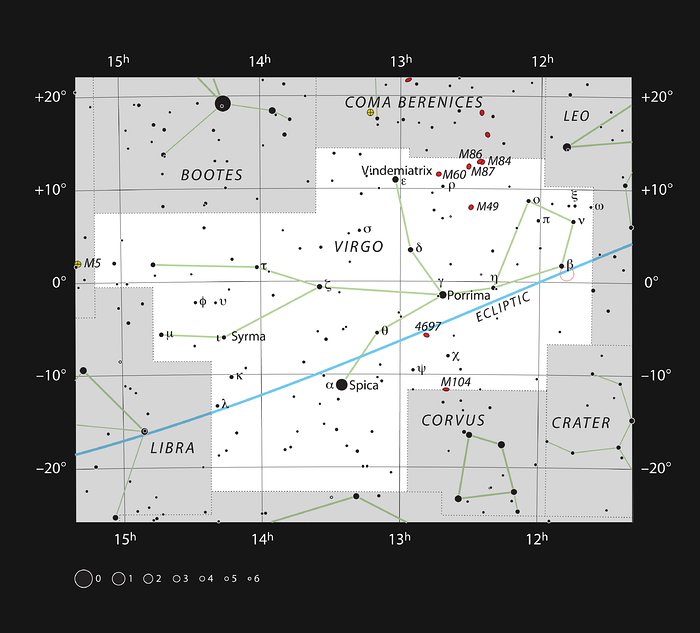 This chart shows the large zodiacal constellation of Virgo (The Virgin). This constellation is home to the faint red dwarf star Ross 128, marked with a red circle, which is sometimes known as Proxima Virginis as it is the closest star to the Earth in the constellation. It is orbited by an Earth-mass planet, Ross 128 b. This picture shows most of the stars that can be seen with the naked eye on a dark and clear night, Ross 128 itself needs a small telescope to be visible. Credit: ESO, IAU and Sky & Telescope

With the data from HARPS, the team found that Ross 128 b orbits 20 times closer than the Earth orbits the Sun. Despite this proximity, Ross 128 b receives only 1.38 times more irradiation than the Earth. As a result, Ross 128 b’s equilibrium temperature is estimated to lie between -60 and 20 °C (-76° to 68 °F), thanks to the cool and faint nature of its small red dwarf host star, which has just over half the surface temperature of the Sun. While the scientists involved in this discovery consider Ross 128b to be a temperate planet, uncertainty remains as to whether the planet lies inside, outside, or on the cusp of the habitable zone, where liquid water may exist on a planet’s surface [2].

Astronomers are now detecting more and more temperate exoplanets, and the next stage will be to study their atmospheres, composition and chemistry in more detail. Vitally, the detection of biomarkers such as oxygen in the very closest exoplanet atmospheres will be a huge next step, which ESO’s Extremely Large Telescope (ELT) is in prime position to take [3].

"New facilities at ESO will first play a critical role in building the census of Earth-mass planets amenable to characterization. In particular, NIRPS, the infrared arm of HARPS, will boost our efficiency in observing red dwarfs, which emit most of their radiation in the infrared. And then, the ELT will provide the opportunity to observe and characterise a large fraction of these planets," concludes Xavier Bonfils.

[1] A planet orbiting close to a low-mass red dwarf star has a larger gravitational effect on the star than a similar planet orbiting further out from a more massive star like the Sun. As a result, this "reflex motion" velocity is much easier to spot. However, the fact that red dwarfs are fainter makes it harder to collect enough signal for the very precise measurements that are needed.

[2] The habitable zone is defined by the range of orbits around a star in which a planet can possess the appropriate temperature for liquid water to exist on the planet’s surface.

[3] This is only possible for the very few exoplanets that are close enough to the Earth to be angularly resolved from their stars.