An international team of astronomers led by Las Cumbres Observatory (LCO) has made a bizarre discovery; a star that just keeps shining.

Supernovae, the explosions of stars, have been observed in the thousands and in all cases they marked the death of a star.

But in a study published on November 08, 2017 in the journal Nature, the team discovered a remarkable exception; a star that exploded multiple times over a period of more than fifty years. Their observations, which include data from W. M. Keck Observatory on Maunakea, Hawaii, are challenging existing theories on these cosmic catastrophes. 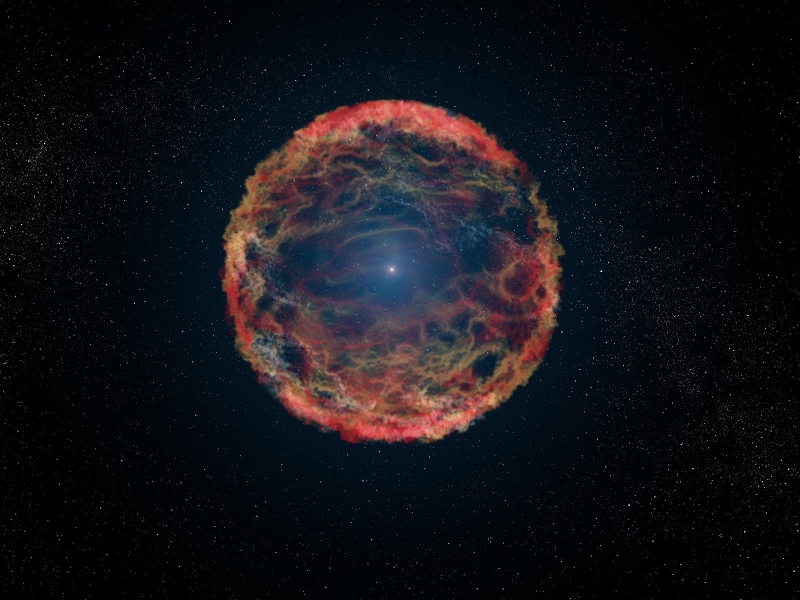 "The spectra we obtained at Keck Observatory showed that this supernova looked like nothing we had ever seen before. This, after discovering nearly 5 000 supernovae in the last two decades, said Peter Nugent, Senior Scientist and Division Deputy for Science Engagement in the Computational Research Division at Lawrence Berkeley National Laboratory who co-authored the study. "While the spectra bear a resemblance to normal hydrogen-rich core-collapse supernova explosions, they grew brighter and dimmer at least five times more slowly, stretching an event which normally lasts 100 days to over two year."

Researchers used the Low Resolution Imaging Spectrometer (LRIS) on the Keck I telescope to obtain spectrum of the star’s host galaxy, and the Deep Imaging and Multi-Object Spectrograph (DEIMOS) on Keck II to obtain high-resolution spectra of the unusual star itself.

The supernova, named iPTF14hls, was discovered in September of 2014 by the Palomar Transient Factory. At the time, it looked like an ordinary supernova. Several months later, LCO astronomers noticed the supernova was growing brighter again after it had faded. 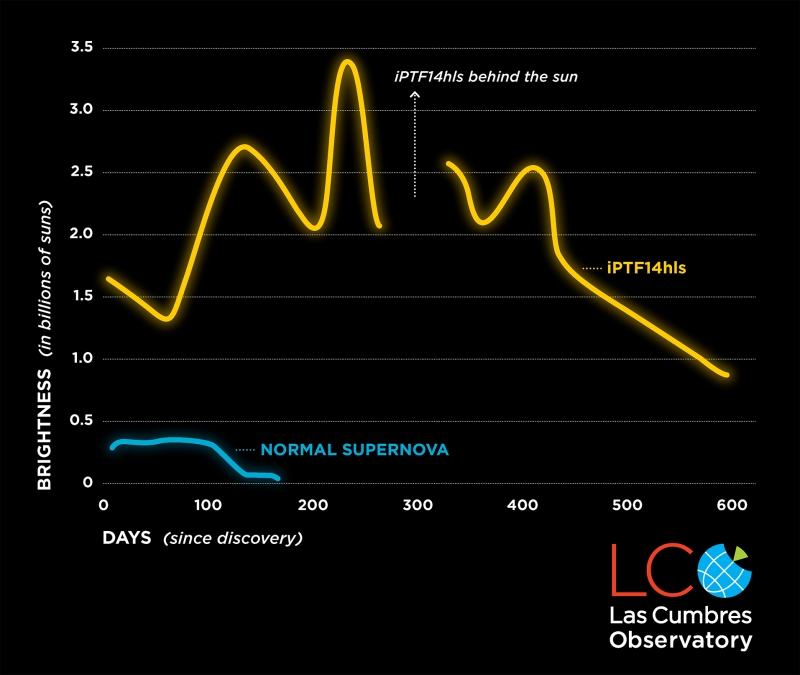 When astronomers went back and looked at archival data, they were astonished to find evidence of an explosion in 1954 at the same location. This star somehow survived that explosion and exploded again in 2014.

An image taken by the Palomar Observatory Sky Survey reveals a possible explosion in the year 1954 at the location of iPTF14hls (left), not seen in a later image taken in 1993 (right). Supernovae are known to explode only once, shine for a few months and then fade, but iPTF14hls experienced at least two explosions, 60 years apart. Adapted from Arcavi et al. 2017, Nature.Credit: POSS/DSS/LCO/S. WILKINSON

"This supernova breaks everything we thought we knew about how they work. It’s the biggest puzzle I’ve encountered in almost a decade of studying stellar explosions," said lead author Iair Arcavi, a NASA Einstein postdoctoral fellow at LCO and the University of California Santa Barbara.

The study calculated that the star that exploded was at least 50 times more massive than the sun and probably much larger. Supernova iPTF14hls may have been the most massive stellar explosion ever seen. The size of this explosion could be the reason that our conventional understanding of the death of stars failed to explain this event.

Supernova iPTF14hls may be the first example of a "Pulsational Pair Instability Supernova."

"According to this theory, it is possible that this was the result of star so massive and hot that it generated antimatter in its core, said co-author Daniel Kasen, an associate professor in the Physics and Astronomy Departments at UC Berkeley and a scientist at Lawrence Berkeley Lab. That would cause the star to go violently unstable, and undergo repeated bright eruptions over periods of years."

That process may even repeat over decades before the star’s large final explosion and collapse to a black hole.

"These explosions were only expected to be seen in the early universe and should be extinct today. This is like finding a dinosaur still alive today. If you found one, you would question whether it truly was a dinosaur, said Andy Howell, leader of the LCO supernova group and co-author of the study.

Indeed, the Pulsational Pair Instability theory may not fully explain all the data obtained for this event. For example, the energy released by the supernova is more than the theory predicts. This supernova may be something completely new.

Astronomers continue to monitor iPTF14hls, which remains bright three years after it was discovered.

"This is one of those head-scratcher type of events," said Nugent. "At first we thought it was completely normal and boring. Then it just kept staying bright, and not changing, for month after month. Piecing it all together, from our observations at Palomar Transient Factory, Keck Observatory, LCOGT, and even the images from 1954 in the Palomar Sky Survey, has started to shed light on what this could be. I would really like to find another one like this."