Astronomers have detected a new type of cosmic explosion that has the characteristics of a supernova and a gamma-ray burst– two of the most powerful outbursts in the universe.

In 2018, astronomers spotted a cosmic blast that has a strange behavior– dubbed the AT2019cow or The Cow, the team remarked that it acted like a typical supernova explosion. However, unlike common space explosions, The Cow had an unusual brightness that intensified rapidly, then faded in just a matter of days.

Both outbursts showed odd characteristics, and due to how the explosions behaved, astronomers carried out follow-up observations with the help of different telescopes and observatories.

The astronomers found out that The Koala generated brightness similar to a gamma-ray burst, which is the most powerful form of light in space. On the other hand, CSS161010 flung an unprecedented amount of material into interstellar space at more than half the speed of light.

The three explosions were referred to as Fast Blue Optical Transients (FBOTs), with astronomers noting that the formation of such events is likely similar to that of a supernova or a gamma-ray burst.

It starts when a star more massive than the Sun collapses under its own gravity's weight and exploding after hitting the end of its life cycle.

The explosion launches stellar material into its surroundings, which at times form into a rotating disk around the supernova remnant or the resulting black hole.

The disk, known as an accretion disk, can send powerful jets of material into interstellar space, which often triggers powerful gamma-ray bursts.

FBOTs also produce an accretion disk covered by thick material from a star, which causes bright and visible light bursts that are far different from a typical supernova or a gamma-ray burst.

"While FBOTs have proven rarer and harder to find than some of us were hoping, in the radio band they’re also much more luminous than we’d guessed, allowing us to provide quite comprehensive data even on events that are far away," said astronomer Daniel Perley of the Liverpool John Moores University. 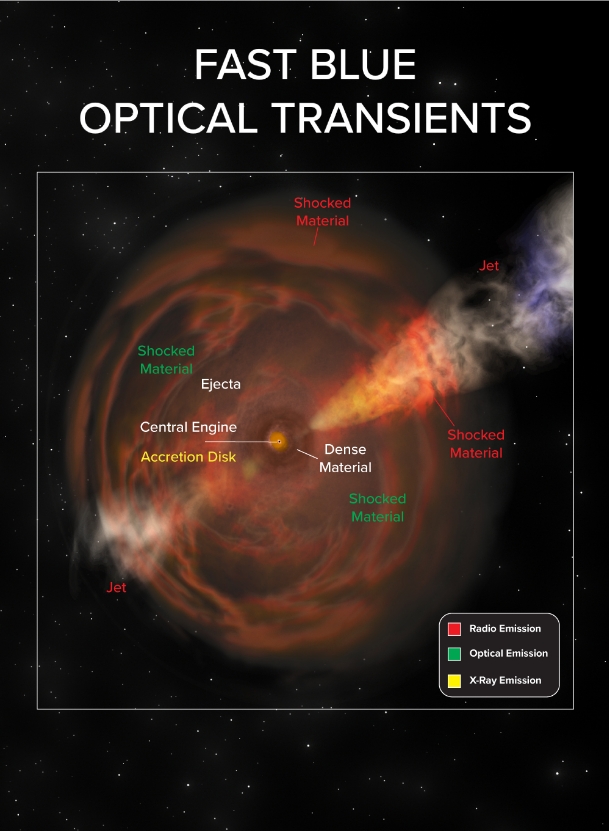 We present X-ray and radio observations of the Fast Blue Optical Transient CRTS-CSS161010 J045834−081803 (CSS161010 hereafter) at t = 69–531 days. CSS161010 shows luminous X-ray (L x ~ 5 × 1039 erg s−1) and radio (L ν  ~ 1029 erg s−1 Hz−1) emission. The radio emission peaked at ~100 days post-transient explosion and rapidly decayed. We interpret these observations in the context of synchrotron emission from an expanding blast wave. CSS161010 launched a mildly relativistic outflow with velocity Γβc ≥ 0.55c at ~100 days. This is faster than the non-relativistic AT 2018cow (Γβc ~ 0.1c) and closer to ZTF18abvkwla (Γβc ≥ 0.3c at 63 days). The inferred initial kinetic energy of CSS161010 (E k  gsim 1051 erg) is comparable to that of long gamma-ray bursts, but the ejecta mass that is coupled to the mildly relativistic outflow is significantly larger ($\sim 0.01\mbox{–}0.1\,{M}_{\odot }$). This is consistent with the lack of observed γ-rays. The luminous X-rays were produced by a different emission component to the synchrotron radio emission. CSS161010 is located at ~150 Mpc in a dwarf galaxy with stellar mass M * ~ 107 M ⊙ and specific star formation rate sSFR ~ 0.3 Gyr−1. This mass is among the lowest inferred for host galaxies of explosive transients from massive stars. Our observations of CSS161010 are consistent with an engine-driven aspherical explosion from a rare evolutionary path of a H-rich stellar progenitor, but we cannot rule out a stellar tidal disruption event on a centrally located intermediate-mass black hole. Regardless of the physical mechanism, CSS161010 establishes the existence of a new class of rare (rate < 0.4% of the local core-collapse supernova rate) H-rich transients that can launch mildly relativistic outflows.

We present ZTF18abvkwla (the "Koala"), a fast blue optical transient discovered in the Zwicky Transient Facility (ZTF) One-Day Cadence (1DC) Survey. ZTF18abvkwla has a number of features in common with the groundbreaking transient AT 2018cow: blue colors at peak ($g-r\approx -0.5$ mag), a short rise time from half-max of under two days, a decay time to half-max of only three days, a high optical luminosity (${M}_{g,\mathrm{peak}}\approx -20.6$ mag), a hot (gsim40,000 K) featureless spectrum at peak light, and a luminous radio counterpart. At late times (${\rm{\Delta }}t\gt 80\,\mathrm{days}$), the radio luminosity of ZTF18abvkwla ($\nu {L}_{\nu }\gtrsim {10}^{40}\,\mathrm{erg}\,{{\rm{s}}}^{-1}$ at 10 $\mathrm{GHz}$, observer-frame) is most similar to that of long-duration gamma-ray bursts (GRBs). The host galaxy is a dwarf starburst galaxy ($M\approx 5\times {10}^{8}\,{M}_{\odot }$, $\mathrm{SFR}\approx 7\,{M}_{\odot }\,{\mathrm{yr}}^{-1}$) that is moderately metal-enriched ($\mathrm{log}[{\rm{O}}/{\rm{H}}]\approx 8.5$), similar to the hosts of GRBs and superluminous supernovae. As in AT2018cow, the radio and optical emission in ZTF18abvkwla likely arise from two separate components: the radio from fast-moving ejecta (${\rm{\Gamma }}\beta c\gt 0.38c$) and the optical from shock-interaction with confined dense material (<0.07 M ⊙ in $\sim {10}^{15}\,\mathrm{cm}$). Compiling transients in the literature with ${t}_{\mathrm{rise}}\lt 5\,\mathrm{days}$ and ${M}_{\mathrm{peak}}\lt -20$ mag, we find that a significant number are engine-powered, and suggest that the high peak optical luminosity is directly related to the presence of this engine. From 18 months of the 1DC survey, we find that transients in this rise-luminosity phase space are at least two to three orders of magnitude less common than CC SNe. Finally, we discuss strategies for identifying such events with future facilities like the Large Synoptic Survey Telescope, as well as prospects for detecting accompanying X-ray and radio emission.