El Niño has arrived, it’s getting stronger, and it’s not about to go away soon. And already there are rumblings that this could be a big one. El Niño in Australia means warmer temperatures, and sometimes, but not always, drier conditions.

In 2014, some climatologists thought a big El Niño might have been on the cards. Ultimately, after some vigorous early warming in the Pacific, conditions only touched on El Niño thresholds. This year, with an event already established, climatologists are suggesting the odds are rising of an El Niño rivalling the record events of 1982 and 1997.

So what’s all the fuss about, and how are conditions different from last year?

El Niño events are identified by equatorial Pacific Ocean temperatures. At the ocean surface, an El Niño is when these are sustained at about 0.8°C warmer than average. As we speak, temperature anomalies are exceeding twice that value.

In fact, we have just experienced twelve consecutive weeks with temperatures more than 1°C above average in all five of the key El Niño monitoring areas. The record was previously held by the 1997 El Niño, when this widespread warming lasted eight consecutive weeks.

But no two El Nino’s are exactly the same. Despite this warming in the tropical Pacific Ocean, in the Indian Ocean temperatures are far warmer than they were in 1997 (or 1982), which may mean different impacts for Australia. But more about that later.

When sea surface temperatures in the central equatorial Pacific get warm enough, the atmospheric circulation shifts and the usually strong trade winds reduce, sometimes even reversing.

The direct consequence of the changing wind pattern is that the sea level in the western equatorial Pacific is no longer “piled up” by the trade winds. Low sea levels north of New Guinea (shown boxed) are strongly correlated with Nino3.4, which is the index that relates best to Australian climate. 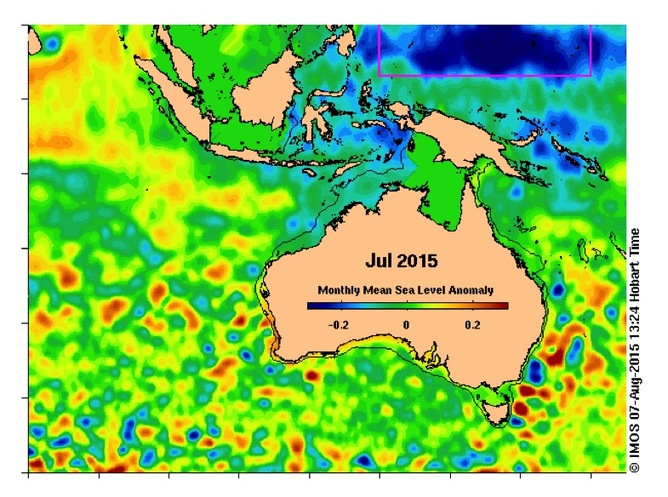 Sea level difference in height from the 1993-2000 normal for July 2015. Exceptionally low sea level to the north of Australia as expected with El Niño events. 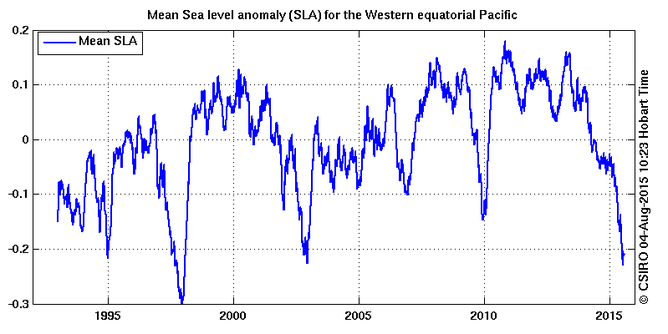 At the peak (December) of the 1997 El Niño, the sea level in the western Pacific dropped nearly 30 cm. It is only August and already the sea level is nearly 25 cm below normal to the north of Australia.

Likewise, in the eastern Pacific, sea levels have risen by similar amounts as the weakened trades allow water to shift east. This half-metre difference in the normal sea level between the east and west is a classic strong El Niño signature.

A drop in sea level often means less water flows past Indonesia and down Australia’s west coast — weakening the Leeuwin Current and reducing the likelihood of coral bleaching in Western Australia.

Climate forecast centres around the world are keenly monitoring the development of this year’s El Niño. Why? Because for some time, all the top dynamical (i.e., physics based) climate models have agreed that there is more warming of the tropical Pacific Ocean to come.

The atmosphere is kicking the El Niño along

Reinforcement by the atmosphere is an essential part of El Niño development – as you can see in our Understanding ENSO video.

Two exceptionally large westerly wind events have already occurred in the western equatorial Pacific this year, giving this El Niño a significant boost. Another wind event is forecast for August to kick the system along even further and add to the strength of this El Niño.

What does this mean for Australia?

Of the 26 El Niño events since 1900, 17 have brought widespread drought to Australia. In the big El Niño of 1982, drought devastated the eastern half of Australia and drove the devastating Ash Wednesday bushfires.

In contrast, the even stronger El Niño of 1997–98 brought more localised drought, with key rains in May and September meaning winter crops did reasonably well in most areas. Other years, such as 2002 and 1996, when weaker El Niño’s occurred, the drought was more severe.

For Australia, it’s not the size of El Niño that matters, it’s how it interacts with other rainfall drivers – such as sea surface temperatures around the continent and in the Indian and Southern Oceans, as well as random ‘weather noise’ – that governs the eventual rainfall over the continent. 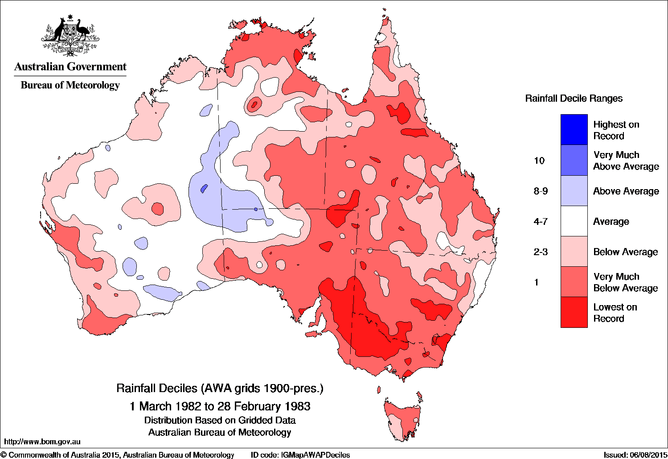 Rainfall deciles for the strong El Niño of 1982. Credit: BOM.gov.au. 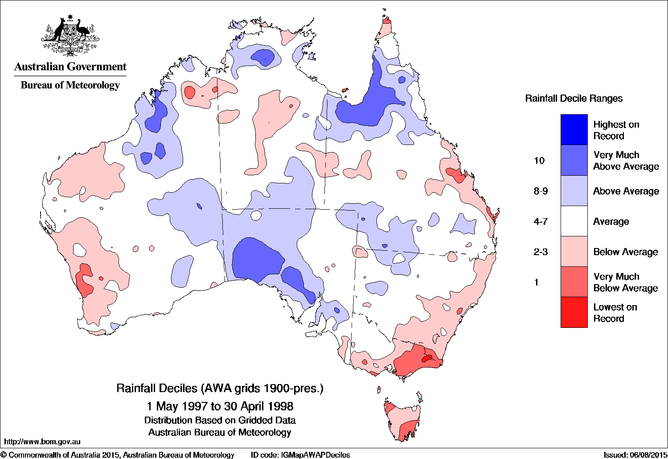 Rainfall deciles for the strong El Niño of 1997. Credit: BOM.gov.au. 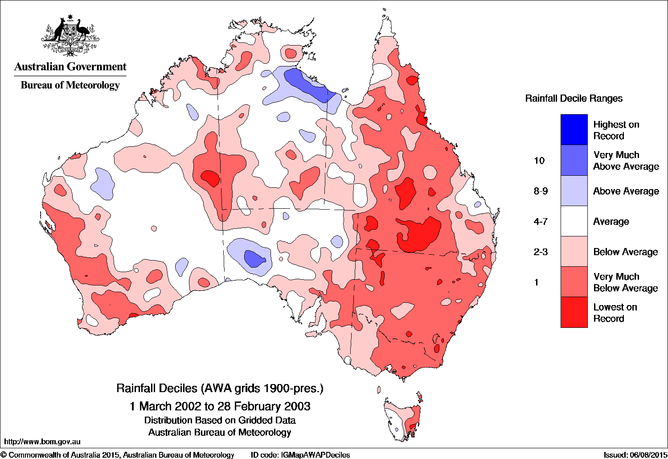 Rainfall deciles for the weak to moderate El Niño of 2002. Credit: BOM.gov.au.

What can we expect?

A significant El Niño event is currently underway, and there’s a chance it could rival the big events of 1982 and 1997. While this may increase the chance of drought and higher temperatures in eastern Australia, many other factors influence potential impacts. 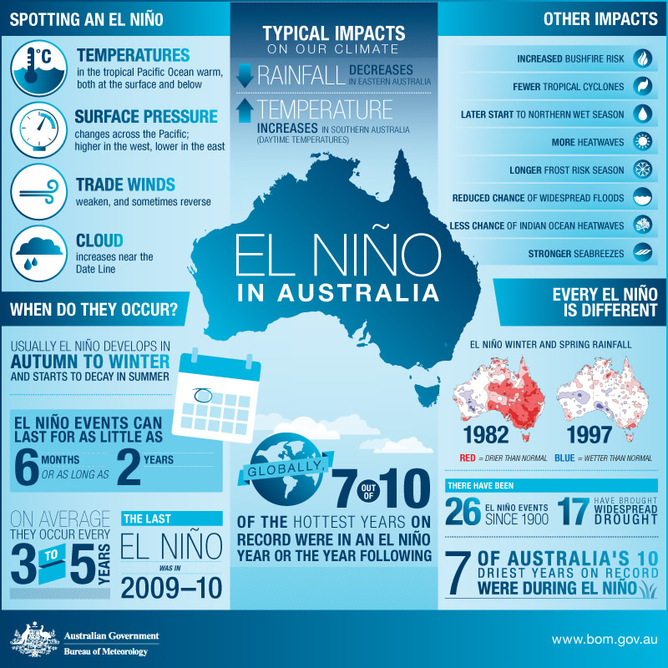 We are already seeing that in the August–October Bureau of Meteorology seasonal outlooks, with the warmest June ocean temperatures on record in the southern Indian Ocean keeping the strengthening El Niño at bay by putting more moisture into the mid-levels of the atmosphere and changing weather patterns.

The 2015 El Niño is already significant, and a big El Niño certainly remains a possibility. Widespread strong impacts haven’t (yet) raised their head for Australia and indeed, such as in 1997, may never do.

But managing El Niño is all about managing risk. The southern spring is the time when dry weather, frosts and heatwaves can hurt farmers and many others the most. And that’s when El Niño events, which raise the odds of these impacts, like to bite hardest.