The earthquake activity that began in July 2014 in the Sheldon Wildlife Refuge in far northwest Nevada is continuing to shake residents, University of Nevada, Reno reports. Their seismologists are monitoring the on-going activity that includes three earthquakes larger than magnitude 4.0 since mid-July, including the largest of these, a magnitude 4.6 on July 16.

“Although the activity is pretty far from population centers, that doesn’t help the ranchers and residents near Vya, Nevada, east of Cedarville, California, who feel the shaking from nearly every earthquake larger than about magnitude 3.0,” Ken Smith, seismologist at the University of Nevada, Reno’s Nevada Seismological Laboratory said. “Since last July, we’ve been able locate 5 610 earthquakes in the swarm.

“A temporary station installed in late November 2014 in the Coleman Canyon area has really helped improve locating events. We estimate that we can only pinpoint about 5 to 10 percent of everything we can see on this closest station since the seismic network station coverage is very sparse in northwest Nevada. Sharing several stations with our partner network at the University of Washington has also helped in monitoring the activity.”

“There has been nearly continuous activity since last July, mostly small magnitude events, and the swarm has been punctuated by three distinct periods of magnitude 4 earthquakes,” Smith said. “The first period was in November and early December of 2014, the second was in January 2015 and this most recent flare up began in mid-July. From analysis of the data to date, the activity appears to be primarily associated with a fault, or faults, dipping steeply to the southeast and striking north-northeast. We just don’t have the resolution that we’d have with more close-in seismic stations.”

There have been a lot of questions as to whether this activity is related to volcanic activity. Although that can’t be completely ruled, scientists haven’t found direct evidence in the seismic data to indicate the swarm is driven by a volcanic process. Smith said it appears to be a very energetic, long-lasting but typical tectonic sequence associated with extensional deformation, characteristic of what is seen throughout the western Great Basin.

“This is somewhat in character with Nevada earthquake activity, with swarms of thousands of small earthquakes, sometimes followed by a larger one,” Graham Kent, director of the Nevada Seismological Lab, said. “It’s a good reminder that Nevada is the third most seismically active state in the nation and that we all should be prepared.” 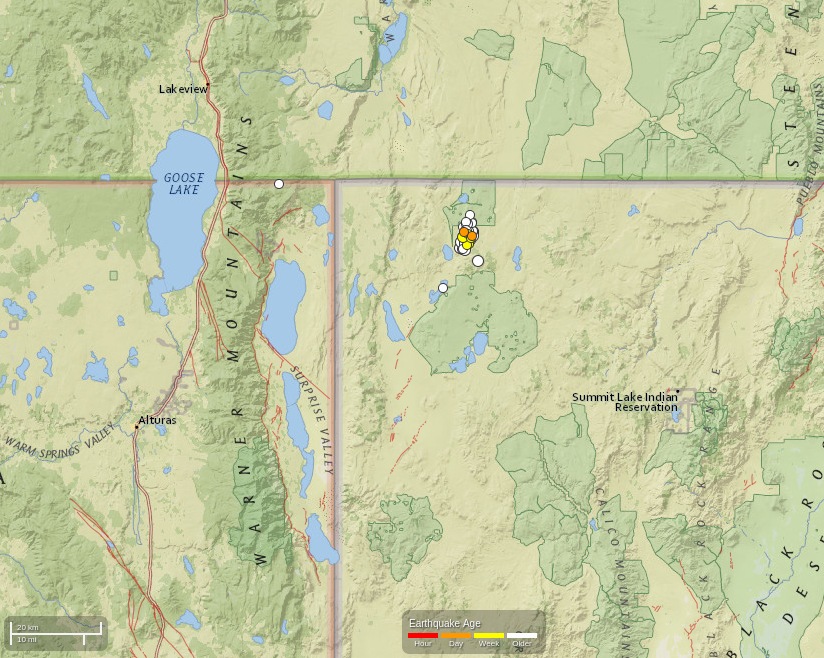 During any sequence of earthquakes, there is a small increase in the probability of a larger event. Even after a year of nearly continuous activity, whether a larger event eventually happens in the northwest Nevada swarm cannot be predicted or forecast. However, large earthquakes can happen anywhere in Nevada, and officials encourage citizens to take steps to prepare for the potential for stronger ground shaking.

Though the third most seismically active state in the United States, behind California and Alaska, Nevada has not had a magnitude 7.0 earthquake in 60 years.

“The first 54 years of the 20th century we had seven earthquakes of magnitude 6.5 or larger and haven’t had one since,” Kent said. “We haven’t had the big one since the Dixie Valley/Fairview Peak sequence in 1954 east of Fallon, which was two magnitude 7s four minutes apart. Since then, Nevada’s population has grown 13-fold.”

The magnitude 6.0 Wells, Nevada, earthquake in 2008 has been the largest event in Nevada in 42 years. Historically, Nevada can expect to have three magnitude 7.0 earthquakes per century and one magnitude 6.0 or larger every decade, according to Kent.

The Nevada Seismological Laboratory, the Pacific Northwest Seismic Network at the University of Washington, the Oregon Department of Geology and Mineral Industries and the U.S. Geological Survey are working together to closely monitor the Sheldon swarm earthquake activity.