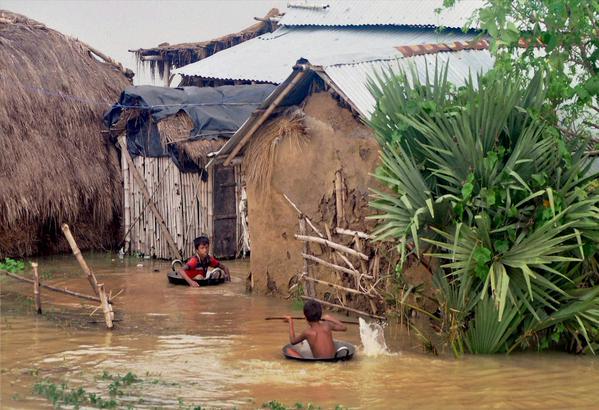 The consequences of cyclone Komen are ongoing in parts of Bengal, Odisha, Manipur, Gujarat and Rajasthan. Another round of heavy rains has severely affected already waterlogged areas, causing more floods and landslides. About 81 people lost their lives due to flood related incidents, and over 80 lakh (8 million) people were affected, up to August 2.

According to Znews,14 district and about 40 lakh (4 million) people were affected by the floods in Gujarat in the last couple of days.

The floods in Manipur which have affected about 1 lakh (100 000) people are likely to be the worst in the last three decades. 20 people died in a landslide caused by severe flooding in Joumol village in Chandel district, on August 1. The river Chakpi level is well above the danger mark.

Flooding kills at least 81 in India, including 48 in West Bengal – @timesofindia http://t.co/CAO9Utdt65

Around 5 lakh (500 000) people in Odisha have been rushed to relief camps, while the flood situation is generally getting more stable, and the waters are withdrawing. Water levels of rivers in the districts of Jharkhand's Giridih and Chatra are still very close to the danger mark, as the rains continue to batter the area.

Heavy flooding in the state of Rajasthan has so far claimed lives of 28 people; 12 of them died in the last couple of days.

Although the rain intensity should ease in the next few days, heavy rains are still forecasted across the affected states over the next 24 hours.