A deep low pressure system centered over southeastern Canada will continue to push polar air over the eastern half of the US this week. Well below average temperatures will reach the Gulf Coast, with most of the Mid-Atlantic states barely getting above freezing on Wednesday, November 19, 2014. In the Midwest, periods of lake effect snow will continue south and east of the Great Lakes through Wednesday, NWS reported today.

According to their Short Range Forecast Discussion published 08:55 UTC today, temperatures will remain below normal from the Great Plains to the Eastern Seaboard. Impressive snowfall totals will continue to add up downwind of the Great Lakes.

"An anomalous upper trough carved out over the eastern half of the Nation will keep temperatures below normal from the Great Plains to the Atlantic coast. Within the frigid airmass, heavy snow bands will continue to set up downwind of the Great Lakes where Arctic air will be ushering in over relatively warmer lake waters. Lake effect snows should wane a bit ahead of a clipper system sliding out of the Upper Midwest on Wednesday, but activity will ramp up again as the system lifts into Canada on Thursday morning. The clipper will also bring another blast of Arctic air and the possibility for light snow showers in the central Appalachians.

Precipitation will be on the increase out West as an upper ridge breaks down and a series of Pacific systems move onshore. The systems should weaken while moving inland, keeping any significant totals confined to the upslope side of the terrain of the Pacific Northwest and Northern California. Warmer air moving in over a dense cold airmass could lead to freezing rain for portions of Washington and Oregon.

In the higher elevations of the Cascades and Sierra Nevada range, temperatures should stay low enough to support accumulating snows.

Across the southern tier, return flow from the Western Gulf will bring moisture and the chance for showers into Texas and the Lower Mississippi Valley on Thursday. Scattered shower activity will also be a possibility across the southern tip of Florida the next few days. " (NWS – Short Range Discussion, 08:55 UTC on Wednesday, November 19, 2014)

WeatherBELL's Dr. Ryan Maue said yesterday that America 'as a whole' awoke on Tuesday to the coldest it has been in November since 1976, 38 years ago. The Lower-48 or CONUS spatially average temperature plummeted overnight to only 19.4°F (-7°C) typical of mid-winter not November 18th! (Data)

He continues…. "More than 85% of the surface area of the Lower-48 reached or fell below freezing Tuesday morning. All 50-states saw at or below freezing temperatures on Tuesday. Record lows from Idaho to Nebraska and Iowa south to Texas and east through the Great Lakes, the eastern 2/3 of the US will shatter decades-long and in some cases, century-long records. Temperatures east of the Rockies will be 20-40°F (-6.6°C to 4.4°C) below climate normals." 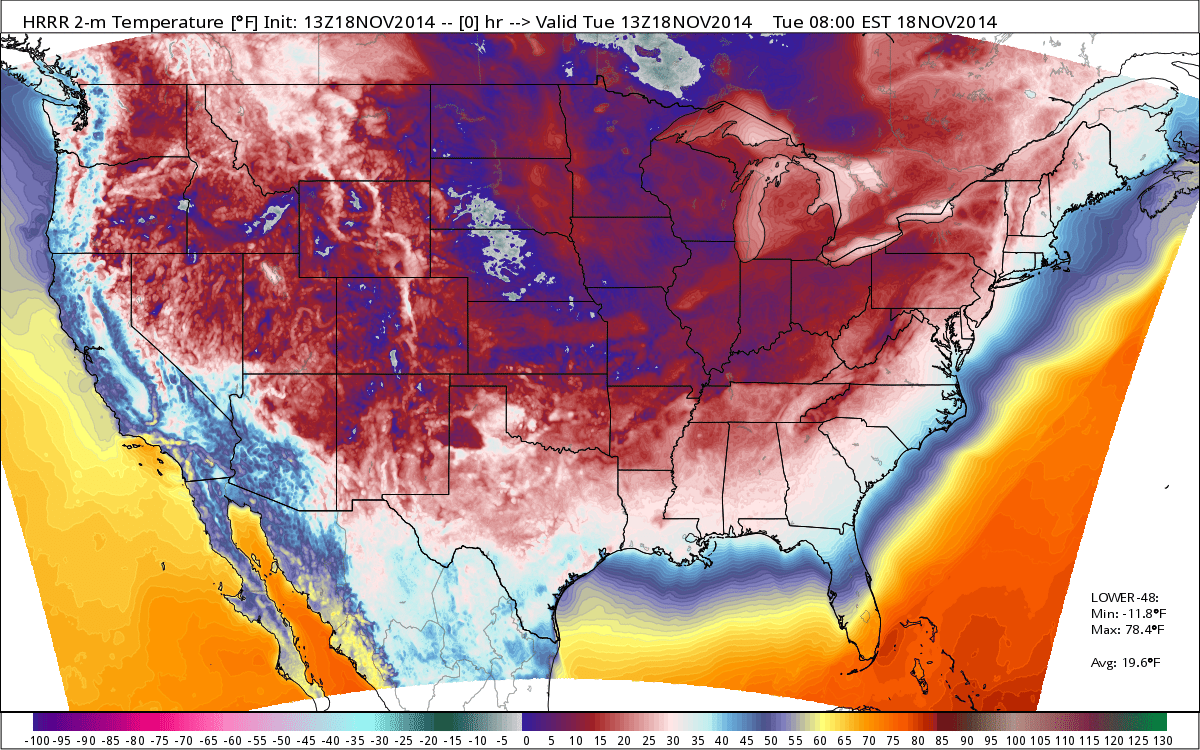 "Compared to normal, temperatures over the past several days have dropped off a cliff… to 10°C below climate normal, more anomalous than even during the #polarvortex of early January. (Anomaly Chart). November is shaping up to be a colder-than-normal month by a lot,"  Maue said.

A state of emergency was declared in Buffalo, New York suburbs of Orchard Park and West Seneca, which had already seen 47 inches (119 cm) of snowfall by 10:00 local time on Tuesday, November 18.

On Tuesday evening, Gov. Andrew Cuomo deployed the National Guard to help those affected, just as he urged drivers to stay off the road for their own safety.

This is different – a double Lake Effect Warning! Yes, there's more on the way… http://t.co/trfmTUWtUJ http://t.co/JYRy7l54Yn