ESA's fledgling satellite Sentinel-1A has been used to map the rupture caused by strong M6.0 earthquake that hit San Francisco Bay Area on August 24, 2014, the largest earthquake to impact the Bay Area since the 1989 M6.9 Loma Prieta earthquake. The result demonstrates the capability of Sentinel-1A and marks the beginning of a new era for our ability to map earthquakes from space.

Scientists collaborating through the UK Natural Environment Research Council’s Centre for the Observation and Modeling of Earthquakes, Volcanoes and Tectonics (COMET), used Sentinel-1A’s special capabilities to analyze the quake. 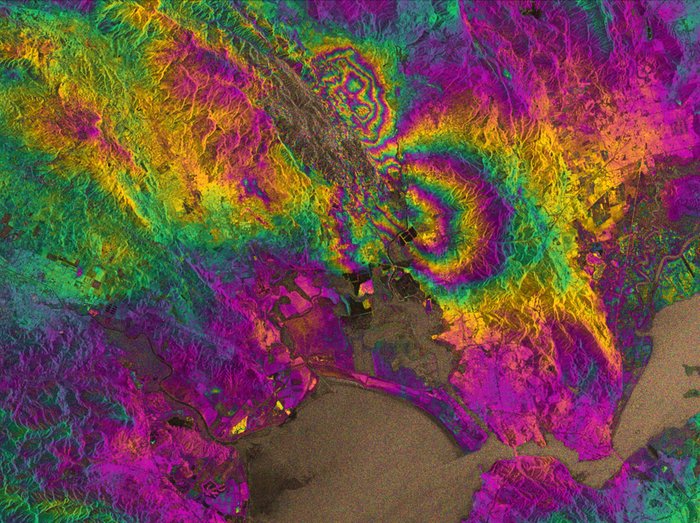 Interferograms like these are being used by scientists on the ground to help them map the surface rupture and model the earthquake. This interferogram very clearly shows the fault that caused the earthquake, which had not been identified as being particularly hazardous prior to the event. Image copyright: Copernicus data (2014)/ESA/PPO.labs/Norut/COMET-SEOM Insarap study

‘Synthetic aperture radar interferometry’ is a technique where two or more satellite radar images of the same area are combined to detect large-scale surface changes. Small changes on the ground modify the reflected radar signal and lead to rainbow-coloured fringes in the ‘interferogram’.

Yngvar Larsen from Norway’s Northern Research Institute and Petar Marinkovic from PPO.labs in the Netherlands processed this new interferogram from two images: one that Sentinel-1A acquired on August 7, the day the satellite reached its operational orbit, and another captured on August 31.

It clearly confirms that part of the West Napa Fault system was responsible for the 6.0 earthquake that rocked California’s wine-producing region. However, the fault had not been identified as being particularly hazardous prior to the quake that hit on August 24.

Sharp lines in the interferogram show minor movements on other faults, such as the part of the West Napa Fault system that crosses Napa airport.

COMET Director, Tim Wright, from University of Leeds said, “This successful demonstration of Sentinel-1A marks the beginning of a new era for our ability to map earthquakes from space. “COMET scientists are building a system that will provide these results routinely for all continental earthquakes, as well as mapping the slow warping of the ground surface that leads to earthquakes.” 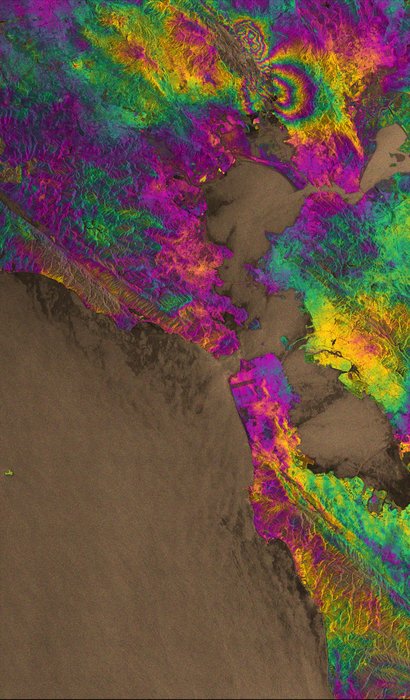 Prof. Andy Hooper, also at the University of Leeds, added, “This satellite represents a sea change in the way we will be able to monitor catastrophic events such as earthquakes and volcanic eruptions in the future, due to its systematic observation strategy.”

Although Sentinel-1A is still being commissioned, ESA was able to respond specifically to the incident and provide data rapidly to the science team. Sentinel-1A passes over the same spot on the ground every 12 days. However, once its identical twin, Sentinel-1B, is launched in 2016, this will be cut to just six days, so that changes can be mapped even faster.