USGS issued Green alert for shaking-related fatalities. There is a low likelihood of casualties.

Red alert level was issued for economic losses. Extensive damage is probable and the disaster is likely widespread. Estimated economic losses are less than 1% of GDP of the United States. Past events with this alert level have required a national or international level response.

This was typical strike-slip earthquake with a mainly horizontal movement, s the most dangerous earthquake type.

Overall, the population in this region resides in structures that are highly resistant to earthquake shaking, though some vulnerable structures exist.

This was the largest quake to hit the Bay Area since the 6.9 magnitude quake hit Loma Prieta nearly 25 years ago.

At least 25 aftershocks were reported soon after the mainshock.

Widespread power outages were reported in Napa as well as minor damage across the region.

USGS warned aftershocks of up to 5.0 are likely in the next week.

The CHP is closing a bridge on Highway 37 in Vallejo while they inspect it for possible damage.

In Contra Costa County, the quake was felt as a long, rolling, shaking motion with several peaks of movement lasting for an extended time. (CBS)

People as far away as the South Bay and Davis reported being woken up by the quake, which was centered 6.7 miles beneath Earth’s surface.

Northern California Seismic System (NCSS), operated by UC Berkeley and USGS, said the probability of a strong and possibly damaging aftershock in the next 7 days is approximately 54% based on the statistics of aftershocks typical for California.

"Most likely, the recent mainshock will be the largest in the sequence. However, there is a small chance (APPROXIMATELY 5 TO 10 PERCENT) of an earthquake equal to or larger than this mainshock in the next 7 days.

In addition, approximately 30 to 70 SMALL AFTERSHOCKS are expected in the same 7-DAY PERIOD and may be felt locally."

INJURIES: 120 patients have been treated or are being treated at Queen of the Valley Hospital. Three patients suffered critical injuries – 2 adults and 1 child.
FIRES:  Four mobile homes were destroyed and two others are involved in an active fire on Orchard Avenue at the Napa Valley Mobile Home Park in north Napa. Two other fires in residential areas were extinguished by Napa fire crews.
STREET CLOSURES: First, Second and Third Streets are closed from Jefferson to Soscol and Main Street is closed from Third to Pearl due to damaged structures. The public should stay out of these areas. There are reports of buckled streets and sidewalks in the Browns Valley area and south toward Carneros. Old Sonoma Road is closed from Buhman Avenue to Congress Valley Road. No other streets are closed in these areas at this time.
STRUCTURES DAMAGED: 15 or 16 buildings in the City have been red-tagged as uninhabitable due to damage from the quake. One of these is the Napa Senior Center which will be closed until further notice. A list of these structures will be posted when available,
GAS LINES: PG&E crews are responding to approximately 100 reported gas leaks or odor of gas reports.
WATER SUPPLY: There are approximately 60 water main leaks. Both water treatment plants running, no damage. Some areas have no water due to main breaks and some areas no or low pressure. Water remains safe to drink. If needed the City will open water stations available to the public.
SHELTERS: The Red Cross evacuation center is open at the Crosswalk Community Church, 2590 First Street. Pets can be sheltered at the Napa County Animal Shelter on Hartle Court.
SCHOOL CLOSURES: All Napa Valley Unified School District campuses will be closed on Monday Aug. 25. Justin Siena High School will also be closed. Drop boxes for debris will be placed at all public schools.

The wine aisle at the #AmericanCanyon #Safeway. #earthquake #SanFrancisco pic.twitter.com/Q5FEkCf9nh 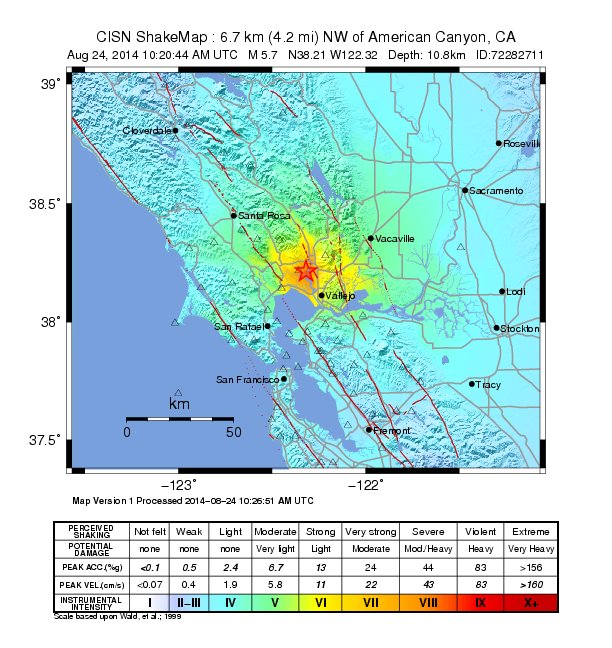 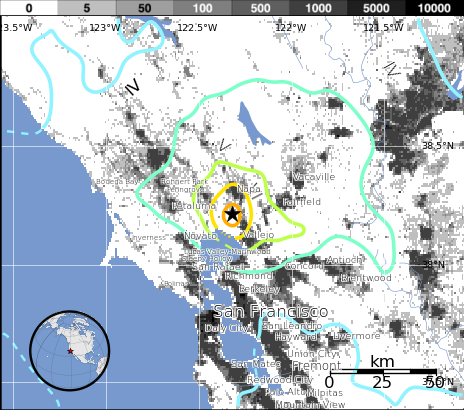 The earthquake lies within a 70-km-wide (44 miles) set of major faults of the San Andreas Fault system that forms the boundary between the Pacific and North American tectonic plates. The persistent northwestward movement of the Pacific plate relative to North America primarily causes right-lateral slip across the major faults, but also causes deformation between the major faults. The ongoing complex deformation field is revealed by modern geodetic surveys and earthquake patterns as well as the regional geologic structure. The earthquake is located at the eastern shore of San Pablo Bay between two major active fault systems: the Hayward-Rodgers Creek Fault system on the west and the Concord-Green Valley Fault system on the east. The earthquake occurred near the well-known West Napa Fault, and the less well known Carneros-Franklin Faults, which juxtapose different suites of rocks. Although there are several faults in the region of the earthquake, only the West Napa Fault is known to have displaced Holocene-age sediment — which is positive evidence of surface fault rupture in the last 11,000 years.

Historically, in this region shaking sufficient to seriously damage structures at Mare Island occurred during the M6.8 1868 Hayward Fault earthquake, the M7.8 1906 San Andreas Fault earthquake, and particularly during the M6.3 1898 Mare Island earthquake. The 1898 earthquake may have occurred about 20 km (12 miles) to the northwest on the southern Rodgers Creek Fault. Even larger nearby events than the 1898 earthquake can be expected in the future. In addition, the epicentral region of this earthquake is depicted on the USGS National Seismic Hazard Maps to have a high probability of strong shaking in the future.

The earthquake is located between two major, largely strike-slip fault systems. The Hayward-Rodgers Creek Fault system, which is approximately 7 km (4 miles) west of the site, generated damaging earthquakes in 1868 and probably in 1898. The Concord-Green Valley Fault system, which is 12 km (7 miles) east of the site, produced a M5.5 earthquake in 1954; while it has not generated a large historical event, there is strong evidence for recent pre-historic activity. The 1999 Working Group on California Earthquake Probabilities (WG99, 1999) concluded that the Hayward-Rodgers Creek Fault system has a 32 percent probability of generating a large earthquake (M6.7 to 7.4) by the year 2030, and the Concord-Green Valley Fault system has a 6 percent chance of generating a large earthquake (M≥6.7) in the same time period.

The earthquake occurred near the north shore of San Pablo Bay. The bayshore areas in the San Francisco Bay region are underlain by landfill and bay mud and have experienced disproportionately greater damage during historic earthquakes. Such damage is caused by soil failure in the fills and amplification of ground shaking by the soft bay mud.