As the comet encounters Mars, gas and particles from its coma and tail will probably envelop the planet and everything on and around it. 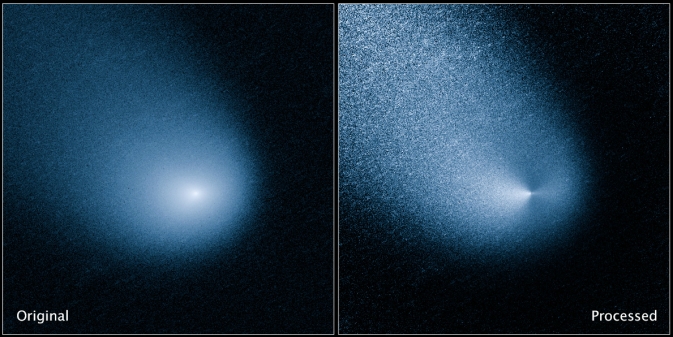 The image on the left, captured March 11 by NASA's Hubble Space Telescope, shows the comet at a distance of 539 million km (353 million miles) from Earth. Hubble can't see Siding Spring's icy nucleus because of its diminutive size. The nucleus is surrounded by a glowing dust cloud, or COMA, that measures roughly 19 312 km (12 000 miles) across.

The right image shows the comet after image processing techniques were applied to remove the hazy glow of the coma revealing what appear to be two jets of dust coming off the location of the nucleus in opposite directions. This observation should allow astronomers to measure the direction of the nucleus’s pole, and axis of rotation.

Hubble also observed Siding Spring on January 21 as Earth was crossing its orbital plane, which is the path the comet takes as it orbits the Sun. This positioning of the two bodies allowed astronomers to determine the speed of the dust coming off the nucleus.

"This is critical information that we need to determine whether, and to what degree, dust grains in the coma of the comet will impact Mars and spacecraft in the vicinity of Mars," said Jian-Yang Li of the Planetary Science Institute in Tucson, Arizona. 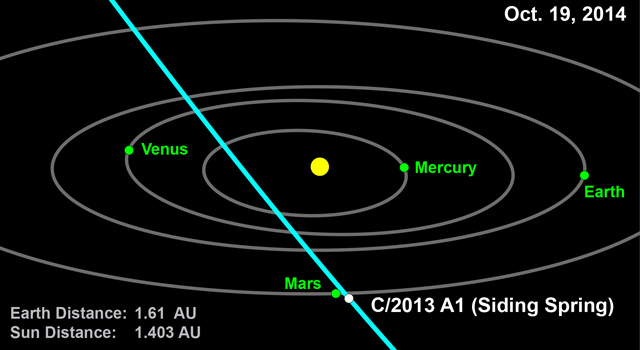 This computer graphic depicts the orbit of comet 2013 A1 (Siding Spring) through the inner solar system. Image credit: NASA/JPL-Caltech

According to the study published online in ScienceDirect: "as of October 21, 2013 the distance of closest approach between the two [Mars and Siding Spring] is projected to be between 89 000 km and 173 000 km, with a nominal value of 131 000 km. A collision between the comet and the planet has been ruled out, but the comet’s coma may very well envelop Mars and its man-made satellites".

According to document prepared by Dr. Althea Moorhead (Geocent, LLC/Jacobs ESSSA Group) and Dr. Bill Cooke (Meteoroid Environments Oce/EV44, Marshall Space Flight Center) the meteor shower that will accompany Siding Spring will have Zenithal hourly rate (ZHr) of 40,000 at Mars. It will lasts a few hours, and may be observable from Opportunity.

"Electrostatic discharges (ESDs) possible at high velocities, but local spacecraft environment and charging state must be taken into account. Siding Spring meteor stream is most similar in speed to Perseids at Earth."

Comet C/2013 A1 Siding Spring simulation of encounter with Mars. Image courtesy of Paul Wiegert – the University of Western Ontario

The following video was released in March 2013, before orbital calculations showed it will not hit Mars, but it still holds interesting data and visuals.

Discovered in January 2013 by Robert H. McNaught at Siding Spring Observatory, the comet is falling toward the Sun along a roughly 1 million year orbit and is now within the radius of Jupiter's orbit. The comet will make its closest approach to our sun on October 25, at a distance of 209 million km (130 million miles) – well outside of Earth's orbit. The comet is not expected to become bright enough to be seen by the naked eye.