C/2013 A1 (Siding Spring) is a long-period comet set for a very close encounter with Mars later this year. Although early estimates of its orbit showed a good possibility of impact, latest observations suggest a near miss and raise great concern for Mars space missions. As Mars and its man-made satellites pass through comet's coma and tail, they will be showered with meteors and satellites will have an increased risk of meteoroid impacts.

The comet was discovered on January 3, 2013 by Robert H. McNaught at Siding Spring Observatory. At the time of discovery it was 7.2 AU from the Sun and located in the constellation Lepus. Its nucleus was later calculated to be approximately 1 – 3 km in diameter.

Recent calculations suggest that on October 19, 2014 (at 18:45 UTC +/- 37 min) Siding Spring will come closer to the surface of Mars than any comet has come to Earth's in recorded history – causing epic meteor shower .

According to the study published online in ScienceDirect: "as of October 21, 2013 the distance of closest approach between the two is projected to be between 89,000 km and 173,000 km, with a nominal value of 131,000 km. Thus, a collision between the comet and the planet has been ruled out, but the comet’s coma may very well envelop Mars and its man-made satellites". 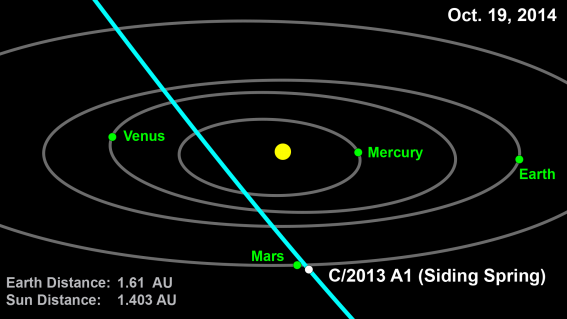 Siding Spring will approach Mars head-on from south of the orbital plane (retrograde orbit, i = 129) with relative speed of 56 km/s. The minimum distance from the Sun (1.4 AU) is expected on October 25, a few days after Mars encounter.

As the comet encounters Mars, gas and particles from its coma and tail will envelop the planet and everything on and around it.

According to document prepared by Dr. Althea Moorhead (Geocent, LLC/Jacobs ESSSA Group) and Dr. Bill Cooke (Meteoroid Environments Oce/EV44, Marshall Space Flight Center) the meteor shower that will accompany Siding Spring will have Zenithal hourly rate (ZHr) of 40,000 at Mars. It will lasts a few hours, and may be observable from Opportunity. 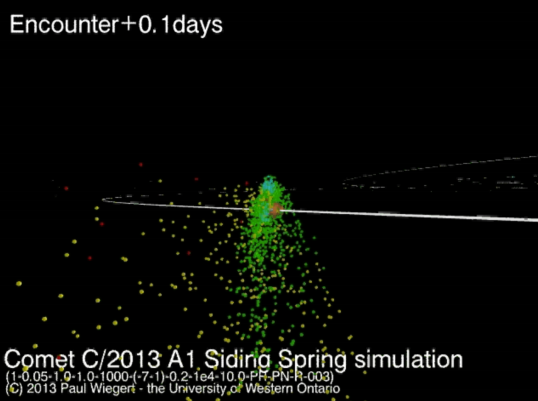 Comet C/2013 A1 Siding Spring simulation of encounter with Mars. Image courtesy of Paul Wiegert – the University of Western Ontario

"Electrostatic discharges (ESDs) possible at high velocities, but local spacecraft environment and charging state must be taken into account. Siding Spring meteor stream is most similar in speed to Perseids at Earth."

The following video was released in March 2013, before orbital calculations showed it will not hit Mars, but it still holds interesting data and visuals.

Mars encounter projections are based on previous observations of similar objects. NASA's MAVEN and India's Mars Orbiter Mission are both on their way toward Mars, and will arrive before Siding Spring.