After 31 months of deep space hibernation ESA's comet chaser "Rosetta" has woken up and contacted mission control today. The signal was received by NASA’s Goldstone ground station in California at 18:18 UTC, during the first window of opportunity the spacecraft had to communicate with Earth. It was immediately confirmed in ESA’s space operations center in Darmstadt.

If everything goes by the plan, Rosetta will become the first space mission to rendezvous with a comet, the first to attempt a landing on a comet’s surface, and the first to follow a comet as it swings around the Sun.

Since its launch in 2004, Rosetta has made three flybys of Earth and one of Mars to help it on course to its rendezvous with 67P/Churyumov-Gerasimenko, encountering asteroids Steins and Lutetia along the way.

Operating on solar energy alone, Rosetta was placed into a deep space sleep in June 2011 as it cruised out to a distance of nearly 800 million km from the warmth of the Sun, beyond the orbit of Jupiter.

The first images of a distant 67P/Churyumov-Gerasimenko are expected in May 2014, which will dramatically improve calculations of the comet's position and orbit.

In early May, Rosetta will be 2 million km from its target, and towards the end of May it will execute a major maneuver to line up for the rendezvous.

Closer in, Rosetta will take thousands of images that will provide further details of the comet's major landmarks, its rotation speed and spin axis orientation. It will also make important measurements of the comet's gravity, mass and shape, and will make an initial assessment of its gaseous, dust-laden atmosphere, or coma.

Rosetta will rendezvous with Comet 67P/Churyumov-Gerasimenko in August 2014 and remain in its close proximity. After extensive mapping of the comet's surface during August and September, a landing site for the mission's 100 kg Philae probe will be chosen.

Given the almost negligible gravity of the comet's 4 km-wide nucleus, Philae will 'dock' with it using ice screws and harpoons to stop it from rebounding back into space. The landing is expected in November 2014.

Philae will send back a panorama of its surroundings and very high-resolution pictures of the surface and will perform on-the-spot analysis of the composition of the ices and organic material. A drill will take samples from 20–30 cm below the surface, feeding them to Philae's laboratory for analysis.

The comet will reach its closest distance to the Sun on August 13, 2015 at about 185 million km, roughly between the orbits of Earth and Mars.

As the comet hurtles through the inner Solar System at around 100 000 km/h, the relative speed between orbiter and comet will remain equivalent to walking pace. During this 'escort' phase the orbiter will continue to analyze dust and gas samples while monitoring the ever-changing conditions on the surface as the comet warms up and its ices sublimate.

By December 2015, both the spacecraft and the comet will have circled the Sun and be on their way out of the inner Solar System.

The image below shows the most recent observations of the 4 km-wide Comet 67P/Churyumov-Gerasimenko, taken on October 5, 2013 by the Very Large Telescope of the European Southern Observatory (ESO) in Chile. The comet was around 500 million kilometers from Earth, before it passed behind the Sun and out of view from Earth’s perspective.

For this image, a long series of observations was processed to reveal both the comet without the background stars (on the left panel), and the star field with the track of the comet marked (on the right). Viewed against a crowded star field in a direction towards the center of the Milky Way, the comet appears as a simple spot.

The observation marks the start of a close collaboration between ESA and ESO to monitor the comet from the ground during Rosetta’s encounter later this year. 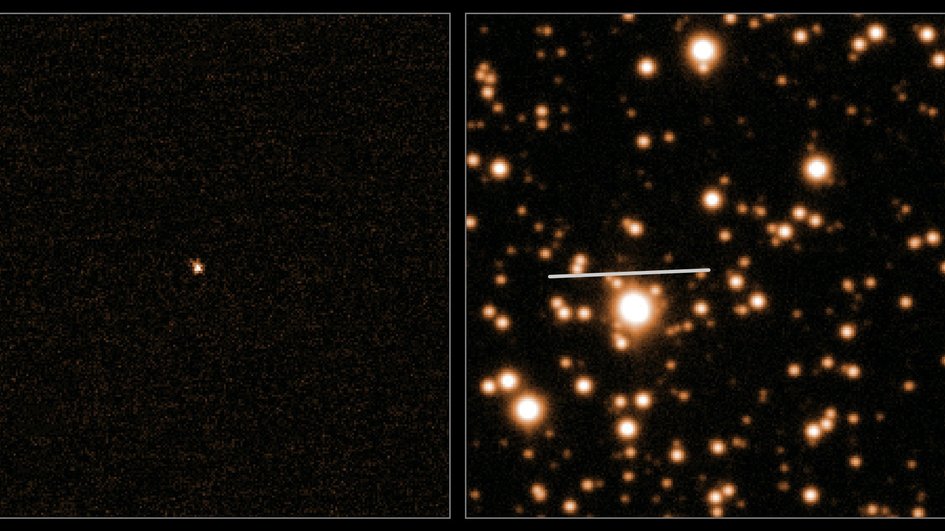