After an impulsive M1.1 solar flare at 02:23 UTC today, a second M-class solar flare erupted from AR 1904 located around the west limb. The latest event peaked at 12:27 UTC as M1.0 solar flare. No Earth directed CMEs were observed. 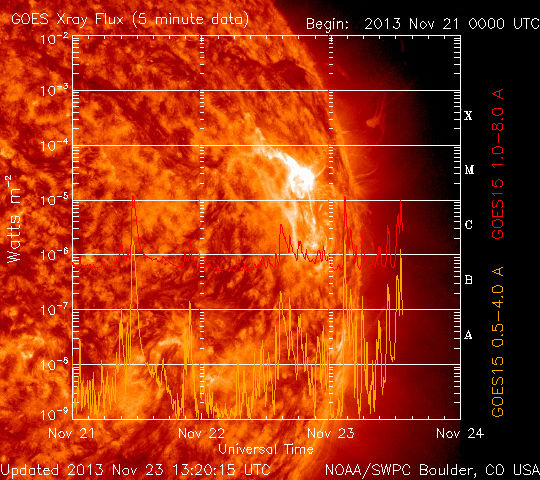 AR 1904 (N12W60, Dai/beta-gamma) appeared to have enough of a separation in SDO HMI/Magnetogram imagery to be classified as a separate spot group from Region 1899 (N07W64, Hhx/alpha).

The rest of the spot groups are relatively stable. 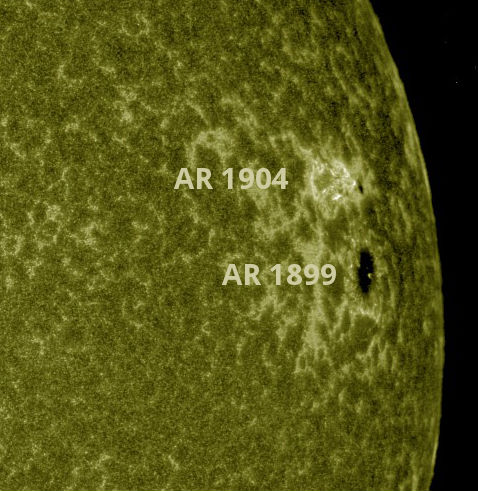 In last 24 hours solar wind parameter appeared to be indicative of a weak transient flow. Solar wind began the period at nominal levels with total field measurements between 2 nT and 5 nT with solar wind speed variable between 273 km/s and 363 km/s. By 00:29 UTC on November 23, total field began to rise to a maximum value near 10 nT while solar wind speed increased slightly to 375 km/s. The Bz component became mostly southward at 05:08 UTC until 10:54 UTC reaching a maximum value of -9 nT. Phi angle was mostly negative (towards) with a deviations into the positive (away) sector early in the period.

Total field is likely to continue to be enhanced with no appreciable effect on solar wind speed for the rest of the day. Solar wind conditions are expected to return to nominal levels on November 24 – 25.

The geomagnetic field is expected to be at quiet to unsettled levels with a chance for active levels today due to transient activity. Mostly quiet conditions are expected on November 24 – 25.