The cause of the eruption was likely the accumulation of pressurized magma and gas under the dome composed of viscous (solid) lava. The pyroclastic flows affected mainly the south, southeast and NNE sides. Bombs from explosive activity were ejected to distances of 500 m (VD).

Latest report by INSIVUMEH also mentions Fuego volcano where degassing and explosions were heard during the night of August 21/22. Two lava flows towards Taniluya and Ash canyons with a length of 500 and 600 meters were reported.

INSIVUMEH recommended CONRED to be aware of the activity of Santiaguito and Fuego, especially by lower lahars in the afternoon and evening.

Meanwhile, CONRED reported that on August 22, 2013 from 04:30 (local time) increased lava extrusion was recorded in the MacKenney crater at Pacaya volcano. In recent days the Pacaya eruption pattern of changes occurred mainly in seismic activity with pulses of increased tremor and explosions. 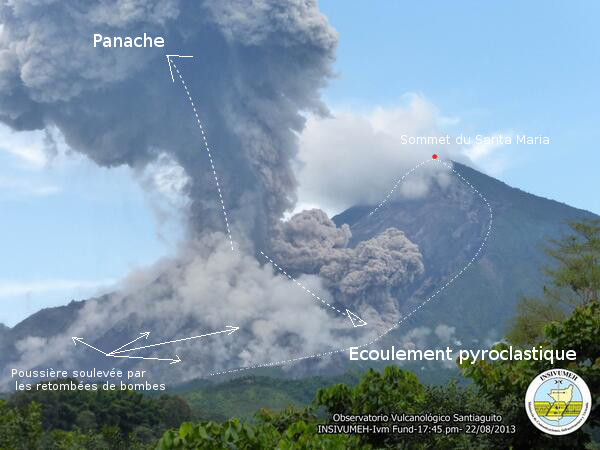 Latest GVP weekly volcano report addition for Santa Maria volcano was on the week of August 7 – 13, 2013: 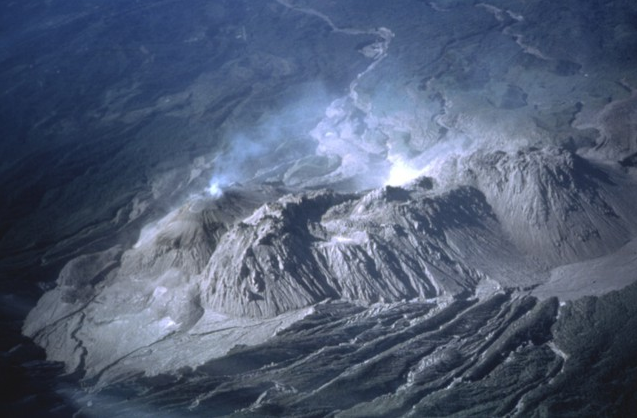 The four major vents of the Santiaguito lava-dome complex are seen here from the summit of Santa María volcano. Caliente vent is steaming at the left, with La Mitad and El Monje in the center, and El Brujo at the right. The dacitic dome complex stretches about 3 km in a roughly E-W direction. Since the birth of Santiaguito in 1922 the focus of activity has shifted frequently during episodic 3-5-year periods of increased growth spaced at 10-12-year intervals. Lava flows and lahar channels extend down drainage to the south from the dome complex.  Photo by Bill Rose, 1980 (Michigan Technological University).

Symmetrical, forest-covered Santa María volcano is one of the most prominent of a chain of large stratovolcanoes that rises dramatically above the Pacific coastal plain of Guatemala. The 3772-m-high stratovolcano has a sharp-topped, conical profile that is cut on the SW flank by a large, 1.5-km-wide crater. The oval-shaped crater extends from just below the summit of Volcán Santa María to the lower flank and was formed during a catastrophic eruption in 1902. The renowned plinian eruption of 1902 that devastated much of SW Guatemala followed a long repose period after construction of the large basaltic-andesite stratovolcano. The massive dacitic Santiaguito lava-dome complex has been growing at the base of the 1902 crater since 1922. Compound dome growth at Santiaguito has occurred episodically from four westward-younging vents, the most recent of which is Caliente. Dome growth has been accompanied by almost continuous minor explosions, with periodic lava extrusion, larger explosions, pyroclastic flows, and lahars (GVP).