The explosion showered the cone by volcanic blocks and bombs and generated pyroclastic flows on the west and southwest flanks that reached a distance of approximately 2 km (1.2 miles). 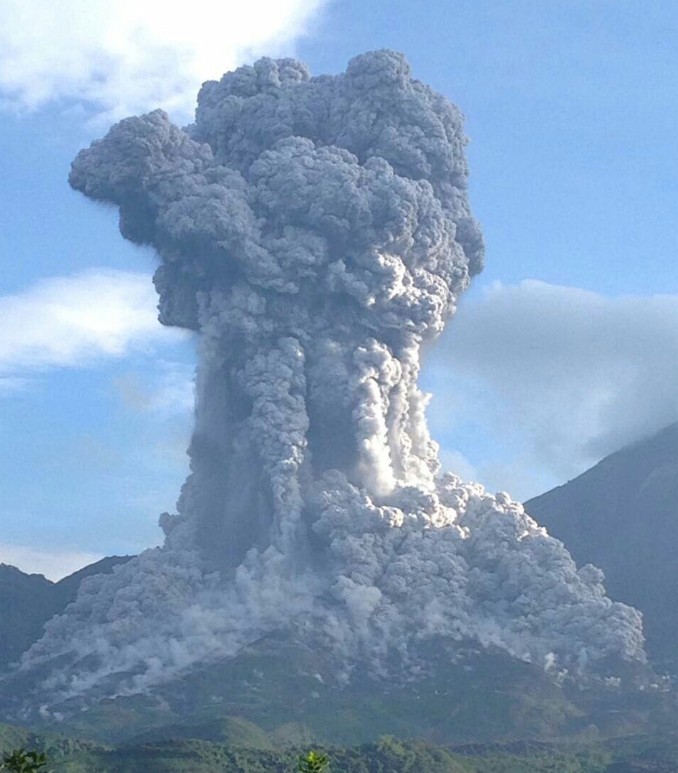 The ash plume drifted to the west and southwest and caused significant ash falls in in areas as far as the border with Mexico (75 km / 46.6 miles). Loma Linda and San Marcos Palajunoj villages are the most affected by ashfall.

Light ash fall was even recorded in greater distances, e.g. the Mexican town of Soconusco located 145 km (90 miles) from the crater. It can well be that the volcano is currently entering a phase of particularly increased activity, Volcano Discovery reported.

Officials said stronger eruptions are possible and are warning residents to take all necessary precautions.

Symmetrical, forest-covered Santa María volcano is one of the most prominent of a chain of large stratovolcanoes that rises dramatically above the Pacific coastal plain of Guatemala. The 3772-m-high stratovolcano has a sharp-topped, conical profile that is cut on the SW flank by a large, 1.5-km-wide crater. The oval-shaped crater extends from just below the summit to the lower flank and was formed during a catastrophic eruption in 1902.

The renowned plinian eruption of 1902 that devastated much of SW Guatemala followed a long repose period after construction of the large basaltic-andesite stratovolcano. The massive dacitic Santiaguito lava-dome complex has been growing at the base of the 1902 crater since 1922. Compound dome growth at Santiaguito has occurred episodically from four westward-younging vents, the most recent of which is Caliente. Dome growth has been accompanied by almost continuous minor explosions, with periodic lava extrusion, larger explosions, pyroclastic flows, and lahars. (GVP)