A significant earthquake swarm has started in the vicinity of Mount Churchill volcano, Alaska, US, on July 14, 2013. USGS measured 27 earthquakes in last 48 hours with magnitudes between 2.5 and 4.4. Depth varies from 0.1 km to 15 km.

It appears something similar might have happened in 1993. Alaska Volcano Observatory has this in their historical record:

"From Neal and others, 1996: "On April 5-6, 1993, seven earthquakes were located in the general vicinity of Mount Churchill, a late Holocene volcano in the eastern Wrangell Mountains and the source of the White River Ash (Richter and others, 1995). Analysis of the seismicity by AVO seismologists indicated a tectonic rather than volcanic source. The tectonic nature of the earthquake swarm was mentioned in the weekly update of April 9, 1993." 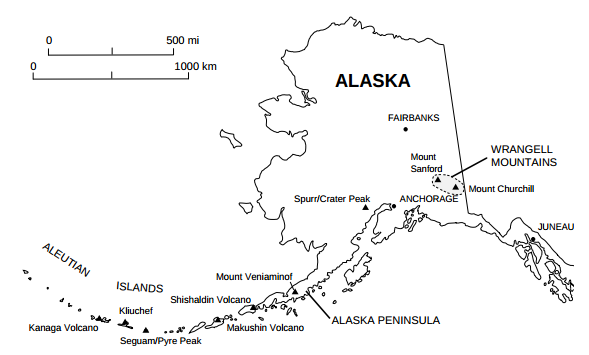 The Bona-Churchill massif in the St. Elias Mountains forms the highest Quaternary volcano in the United States. A 2.7 x 4.2 km wide caldera caps the summit of 4766-m-high Mount Churchill, which is now known to be the source of the White River Ash, produced during two of the largest explosive eruptions in North America during the past 2000 years (McGimsey et al. 1992).

The 5005-m-high summit of Mount Bona lies 4 km across a high saddle from the younger Mount Churchill. The source vent of the widespread bilobate White River Ash deposit, which blankets more than 340,000 sq km of eastern Alaska and NW Canada, was initially thought to be a pumice mound that is mostly buried beneath the Klutlan Glacier NE of Churchill volcano.