A strong earthquake with recorded magnitude of 6.0 (USGS) / 6.1 (EMSC) struck southern tip of the Mentawai Islands, Indonesia on July 5, 2013 at 05:05 UTC. Mentawai Islands are one of the most dangerous tsunami locations in the world but no tsunami threat exists from this earthquake.

This earthquake was a single strong movement, a typical subduction earthquake generated by Sunda megathrust. This is highly seismic area in the world. In addition to the current seismic hazards along this portion of the Sunda arc, this region is also recognized as having one of the highest volcanic hazards in the world. One of the most dramatic eruptions in human history was the Krakatau eruption on August 26-27, 1883, a volcano just to the southeast of the island of Sumatra, which resulted in over 35, 000 casualties.

The great M 9.1 earthquake of December 26, 2004, which produced a devastating tsunami killing 227,898 people was located near the today's M 6.1. The tsunami generated by that earthquake was given various names, including the 2004 Indian Ocean tsunami, South Asian tsunami, Indonesian tsunami, and the Boxing Day tsunami.

Today's earthquake was just 4 days after a deadly M 6.1 earthquake in Northern Sumatra. 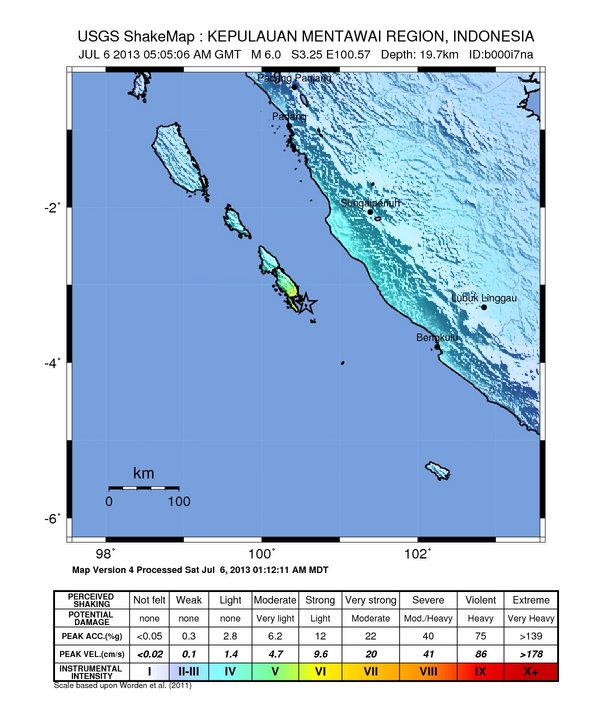 Subduction and seismicity along the plate boundary adjacent to Java is fundamentally different from that of the Sumatran-Andaman section. Relative motion along the Java arc is trench-normal (approximately 65-70 mm/year) and does not exhibit the same strain partitioning and back-arc strike- slip faulting that are observed along the Sumatra margin. Neither has the Java subduction zone hosted similar large magnitude megathrust events to those of its neighbor, at least in documented history. Although this region is not as seismically active as the Sumatra region, the Java arc has hosted low to intermediate-magnitude extensional earthquakes and deep-focus (300-700 km) events and exhibits a similar if not higher volcanic hazard. This arc has also hosted two large, shallow tsunami earthquakes in the recent past which resulted in high tsunami run-ups along the southern Java coast.