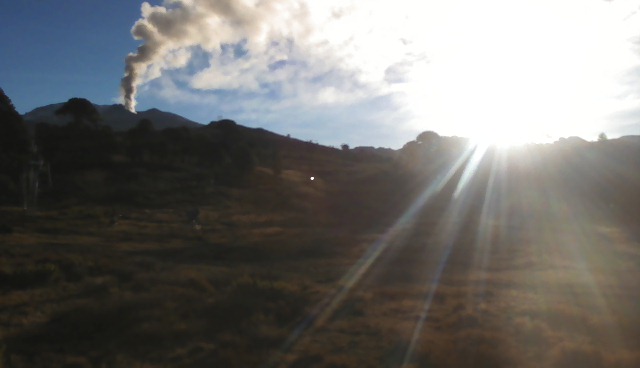 Intense seismic swarm was recorded at Chile's Copahue volcano on May 26th with 356 low magnitude earthquakes related to magma movement per hour. Today, SERNAGEOMIN reported an average of 269 earthquakes per hour, with 6-8 seconds gap, and changed the status of the volcano from Orange to Red – an eruption is imminent or in progress.

Continuous volcanic tremor, an almost sure sign of eruption, has not yet been recorded.

The report also states that the volcano has suffered inflationary deformation process by 10.5 cm / year, which slowed somewhat with the eruption of December 2012, and then continued up to 17.5 cm, which is considered high.

Citizens of Caviahue, Argentina, reported explosions and incandescence from volcano. 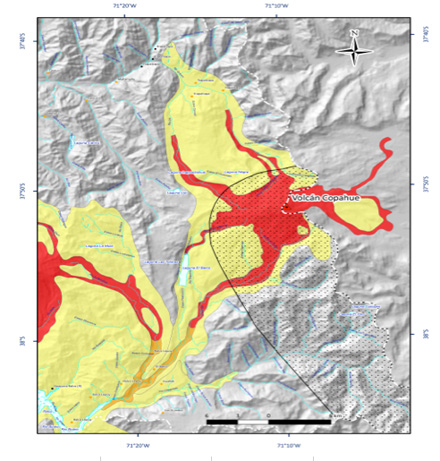 The intensity and type of seismicity observed in recent days, in conjunction with the deformation of the volcanic building, suggest, with a high probability, that the rise of a magmatic body in the shallow layers of the volcano has entered a process of no return.

Extrusion of dome and associated phenomena such as explosive eruptions, with intensities greater than in December 2012, are highly probable. Such eruptions could generate pyroclastic flows and lahars. It is recommended to focus on a radius of 15 km around the active crater and on the banks of the rivers originating in the volcano.

The development process can last several weeks but can also occur anytime.

Acidic hot springs occur below the eastern outlet of the crater lake, contributing to the acidity of the Río Agrio, and another geothermal zone is located within Caviahue caldera about 7 km NE of the summit. Infrequent mild-to-moderate explosive eruptions have been recorded at Copahue since the 18th century. Twentieth-century eruptions from the crater lake have ejected pyroclastic rocks and chilled liquid sulfur fragments (GVP).

Last noticeable eruption of Copahue occurred in 2000. After that, the volcano experienced a first increase of activity in December 2012, and a second one in January 2013. No eruption followed and alert was lowered to Green in April before returning to Yellow soon after. On May 24th alert level was raised to Orange, and on May 27th to Red.

​Featured image: Steam-ash plume from Copahue on May 24, 2013 (SERNAGEOMIN webcam)