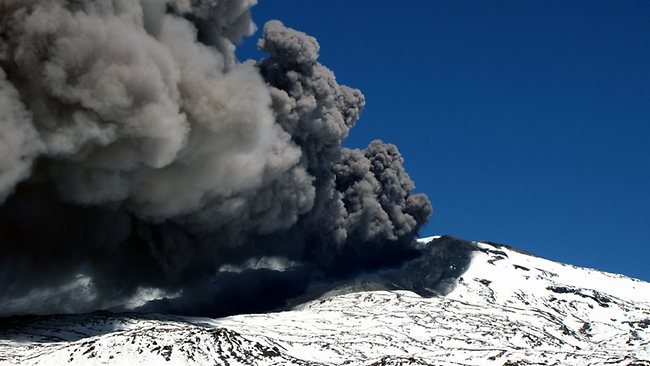 On Saturday, December 22, 2012 (21:43 local time) a strong harmonic tremor signal occurred at Copahue volcano, Chile-Argentina border. About 5 minutes later there were 2 explosions with loud noises reported. The raise in tremor and the explosions also correlated with an increase of the gas column already present from eruption earlier in the day. Chilean authorities established red alert on December 23 in the commune of Alto Biobío. Alert level in Argentina remains at yellow.

Flights are not thought to be affected but planes flying across the countries have been warned. Chilean Mining Ministry’s geology unit recommends careful observation of a 15-km radius around the active crater in case of mudflows of volcanic fragments.

The area, likely to be affected by ashfall with thicknesses greater than 1 cm, is located primarily to the east of the volcano. 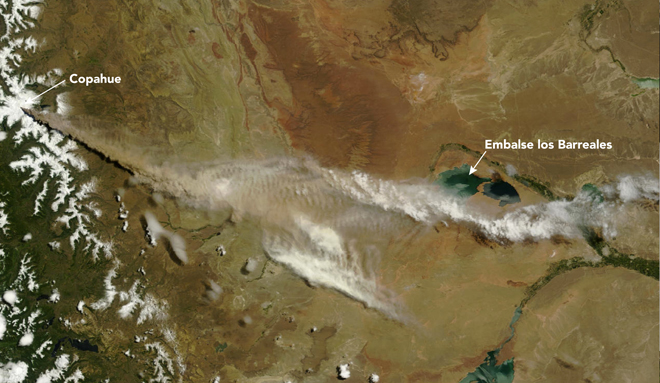 Satellite image taken earlier on November 22, 2012 showed a large ash plume drifting 110 KM SE from volcano. At the time alert level was raised from yellow to orange. Ash fall has been reported in Loncopue village in Argentina, 50 KM SE of the volcano. Residents of the town of Caviahue, in the province of Neuquén, Argentina watched the ash cloud emanating from the volcano.

The Emergency Operating Committee maintains Neuquén yellow alert. The column reached the center locations of the province as Cutral Co, Plaza Huincul, Arroyito and Challacó and, although the authorities considered that no evacuation was necessary, some of the villagers living near the volcano decided to leave their homes preventively.

The intensity of seismic signals suggest that the eruption in progress is small and has characteristics of an open conduit. However, it cannot be ruled out that the activity evolves into a major eruption. (VolcanoDiscovery)

Copahue volcano is located on the border between Argentina and Chile, in northwestern Neuquén and Biobío regions.