Almaty, the capital of Kazakhstan is approx. 250 km from the epicenter. A light shaking in Almaty can be a very strong shaking near the epicenter.

The closest cities to the epicenter and Narynkol and Bayankol. USGS has calculated a theoretical maximum intensity of MMI VII (very strong shaking) near the epicenter.

Although the epicenter is located in Kazakhstan, some minor damage may generate in Kyrgyzstan and Xinjiang (China).  Kazakh authorities are reporting a Magnitude of 6.6 at a depth of 10 km. 3 aftershocks are being reported in Kazakhstan so far (4.5, 4.7 and 5.1). They were felt in Kegen and Narynkol as a weak to very weak shaking. 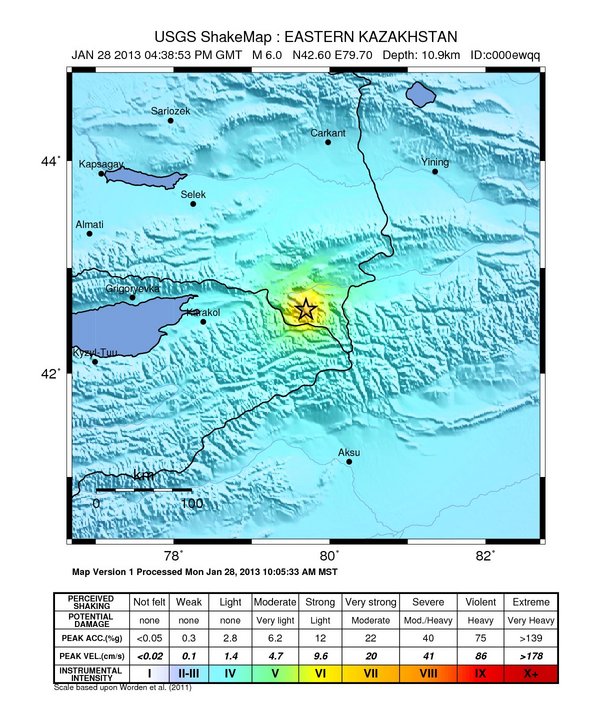 Shallow earthquakes within the Indo-Burmese Arc, predominantly occur on a combination of strike-slip and reverse faults, including the Sagaing, Kabaw and Dauki faults. Between 1930 and 1956, six M7.0+ earthquakes occurred near the right-lateral Sagaing Fault, resulting in severe damage in Myanmar including the generation of landslides, liquefaction and the loss of 610 lives. Deep earthquakes (200km) have also been known to occur in this region, these are thought to be due to the subduction of the eastwards dipping, India plate, though whether subduction is currently active is debated. Within the pre-instrumental period, the large Shillong earthquake occurred on the 12 June 1897, causing widespread destruction.