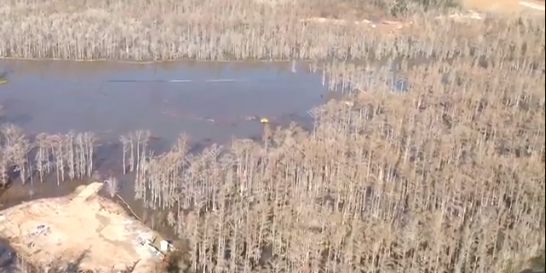 It’s been a while since we last reported about sinkhole development in Bayou Corne, in northern Assumption Parish in Louisiana, US. However, we were very well updated thanks to dedicated crew at The Louisiana Sinkhole Bugle. For daily updates and hard-to-find news go visit their website.

A great sinkhole occurred on August 3, 2012 and since then it reached size of 8.5-acre. On August 3, the size of the sinkhole was said to be approximately the size of two football fields. Heavy rains last week caused another collapse. Several trees on the southern perimeter sloughed into the sinkhole on January 20, 2013.

Observations indicate that the current growth event is centered on the east side of the sinkhole – possibly related to shifting of salt and material within the cavern collapse zone. After a period of heightened activity, the number and strength of sharp seismic events dropped markedly following the release of debris and hydrocarbons from the sinkhole.

Bubbling activity were reported at eleven new sites in a Louisiana swampland, west of a collapsing Bayou Corne  sinkhole, following several days of increased seismic activity (being detected by the surface geophones). There are now 34 known bubble sites in the Bayou Corne and Grand Bayou in the area of the collapsing salt dome. Some bubble sites in the area preceded the formation of the sinkhole by several months but more have been discovered over time.

Texas Brine reported that a total of approximately 190 barrels of liquid hydrocarbons, that had accumulated in the cavern over the past 30 days, were removed and a small amount of gas was safely flared. A depth measurement of cavern #3 from January 20 showed that the floor of the cavern has risen another 43 feet since last measured on December 17, 2012.

A shallow aquifer relief well on the Texas Brine site, ORW 12, began flaring natural gas. This second relief well was installed on the southwest corner of the work area next to the sinkhole. On January 19, 2013 this well plugged off and stopped venting. The appearance of the well pad surface cracks on the southwestern corner of the Oxy 3 well pad, located directly above Texas Brine’s failed cavern and on the eastern side of the sinkhole, forced evacuation of all workers and equipment from this work area and personnel access is being restricted. Watch the WAFB video report on access road near sinkhole.

Bubbling was noticed at two new locations on the surface near the center but the bubbling did not appear to be accompanied by liquid hydrocarbon material. A surface crack in the soil was discovered along the southern edge of the work area near the sinkhole. A sizable amount of vegetative debris rose to the surface in the center of the sinkhole, and several new surface cracks across the work area were discovered running from a northeast-to-southwest direction.


Here is a map providing locations of bubbling sites discovered from January 20 – 22, 2013. 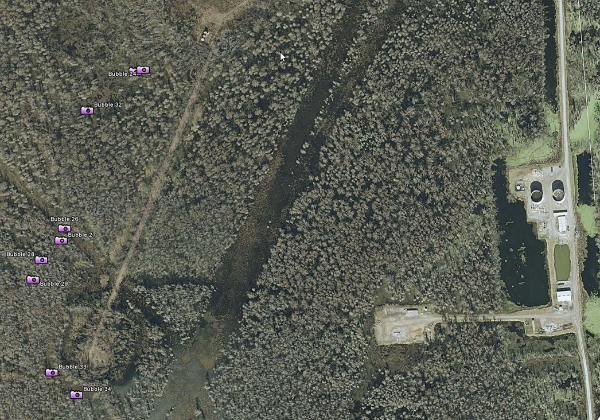 Texas Brine was ordered by officials to drill its new 1,000-foot-deep exploratory well at the end of the access road. The new bubbling discovery has led to speculation that the row of bubbles marks the edge of a suspected subsidence zone around the outer rim of the sinkhole and also prompted officials to shift the location of a 1,000-foot-deep well that Texas Brine had been directed to drill at the end of the access road. High pressures throughout all observation wells have been being recorded as well as the latest giant bubbling area found. New well could cause more destabilization in the already dangerous and unstable area.

Texas Brine and officials planned new seismic monitoring system to determine the “refractive”  characteristics of both vertical and lateral movement of sound waves in the  soil to a depth of approximately 400 feet. It will require the use of highly advanced, “one-of-a-kind” vibro-seismic equipment to generate the sound waves to specialized geophones. The final part of the seismic monitoring system is an upgrade of the 480-foot deep geophone well that is already installed. It currently has a temporary geophone operating in it, but will soon receive a permanent geophone array to also provide data.

The Louisiana Sinkhole Bugle crew run very informative and updated site with lots of hard to find news on the big sinkhole. Check it at LASinkhole.

The Killer Lake Phenomena: Is the Louisiana Sinkhole Becoming the Next “Exploding Lake”?

Salt caverns have been used for several decades to store various hydrocarbon products. In the past few years, nine facilities in the United States have been permitted to dispose nonhazardous oil field wastes in salt caverns. Two of these are also permitted to dispose of naturally occurring radioactive materials (NORM) contaminated oil field wastes. Several other disposal caverns have been permitted in Canada and Europe. Argonne National Laboratory has completed studies analyzing the technical feasibility, legality, economics, and health risks associated with disposing both nonhazardous oil-field wastes (NOW) and NORM contaminated oil-field wastes in salt caverns.

The types of oil field wastes that are planned for disposal in salt caverns are those that are most troublesome to dispose of through regular Class II injection wells because they contain excessive levels of solids. The solids-containing oil field wastes most likely to be disposed of in salt caverns include used drilling fluids, drill cuttings, completion and stimulation wastes, produced sand, tank bottoms, scales, and soil contaminated by crude oil or produced water. The difference between nonhazardous oil field wastes (NOW) and naturally occurring radioactive material (NORM) is the presence of radionuclides above a state-specified action level.

Currently, there are no federal regulations that specifically address handling and disposing of NORM wastes.

After the sealing of the disposal cavern, the pressure in the cavern increases because of geothermal heating and salt creep. Several release scenarios were identified by which contaminants could potentially leave the salt cavern and impact the environment: failure of the cavern seal, release through cracks or leaky interbeds, and partial collapse of the roof.

Hundreds of caverns have been used to store hydrocarbons in the United States since the 1940s. Stored products include liquified petroleum gas, propane, butane, ethane, ethylene, fuel oil, gasoline, natural gas, crude oil and who knows what else. Radium-226 and radium-228 are the primary radionuclides of concern.

New sinkholes have been correlated to land-use practices, especially from ground-water pumping and from construction and development practices. Sinkholes can also form when natural water-drainage patterns are changed and new water-diversion systems are developed. Some sinkholes form when the land surface is changed, such as when industrial and runoff-storage ponds are created. The substantial weight of the new material can trigger an underground collapse of supporting material, thus causing a sinkhole.

The overburden sediments that cover buried cavities in the aquifer systems are delicately balanced by ground-water fluid pressure. The water below ground is actually helping to keep the surface soil in place. Groundwater pumping for urban water supply and for irrigation can produce new sinkholes In sinkhole-prone areas. If pumping results in a lowering of ground-water levels, then underground structural failure, and thus, sinkholes, can occur.

Sinkholes are common where the rock below the land surface is limestone, carbonate rock, salt beds, or rocks that can naturally be dissolved by ground water circulating through them. As the rock dissolves, spaces and caverns develop underground. Sinkholes are dramatic because the land usually stays intact for a while until the underground spaces just get too big. If there is not enough support for the land above the spaces then a sudden collapse of the land surface can occur. (USGS)