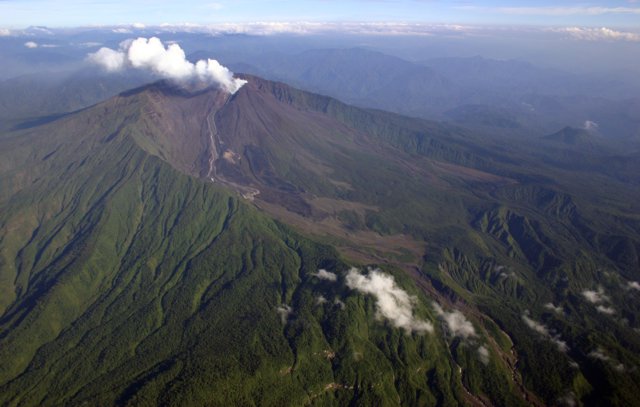 Ecuadorian volcano Reventador is now erupting at full-scale, reports say. A westward 1.5 km high steam and ash plume is noticable above volcano. Summit is glowing and lava can be seen descending the flanks.

Increased seismic activity since January 21 has now become stronger with strong tremors and explosions. Explosions were heard as far as in the Reventador sector, witnesses reported.

IG reported that during January 16 – 21 seismicity at Reventador was moderate; cloud cover prevented visual observations. Incandescence in the crater was observed at night during January 21st and 22nd. On January 22 seismicity at Reventador increased and was characterized by constant low-frequency, high-energy tremor detected by seismic stations around the volcano. Observers reported lava fountains in the crater and lava flows on the flanks, both of which became more intense at 1800. Explosions produced white-to-light-gray plumes that rose 2 km and drifted W.

Reventador, a 3562 m high stratovolcano, is one of the most active Ecuadorian volcanoes. Its 4-km-wide caldera widely breached to the east was formed by edifice collapse and is partially filled by a young, unvegetated stratovolcano that rises about 1300 m above the caldera floor to a height comparable to the caldera rim.

Reventador has been the source of numerous lava flows as well as explosive eruptions that were visible from Quito in historical time. Frequent lahars in this region of heavy rainfall have constructed a debris plain on the eastern floor of the caldera. The largest historical eruption at Reventador took place in 2002, producing a 17-km-high eruption column, pyroclastic flows that traveled up to 8 km, and lava flows from summit and flank vents.


If you value what we do here, create your ad-free account and support our journalism.