GDACS is reporting that this earthquake can have a medium humanitarian impact based on the Magnitude and the affected population and their vulnerability. Only few people are living within 100 km.

A tsunami Warning was in effect for the coastal areas of British Columbia and Alaska from the north tip of Vancouver Island, British Columbia to Cape Suckling, Alaska (75 miles SE of Cordova).

A tsunami was generated but 2 hours later NWS said it no longer poses a threat. Some areas may continue to see small sea level changes. The determination to re-occupy hazard zones must be made by local officials. 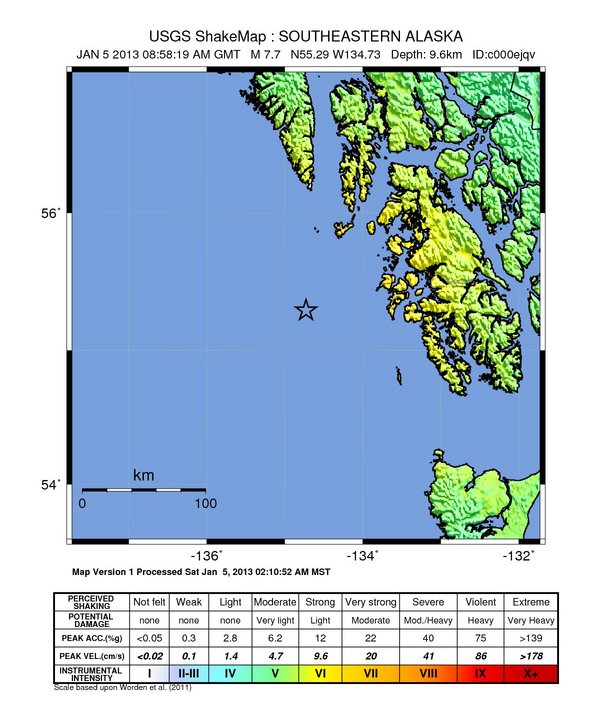 During the past century, four large and well documented tsunamis were generated in the waters off the Alaskan coast. These include the 1946 and 1957 Aleutian events, the 1958 Lituya Bay event, and the 1964 Alaskan event. While all four tsunamis were produced by seismic activity, the intensities, processes of generation (ie. landslide vs. tectonic), and areas of affected coastline differ for each.

During the early morning of April 1, 1946, an earthquake of magnitude 7.4 occurred in an area of the Aleutian Trench located approximately 90 miles south of Unimak Island, part of the Aleutian Island chain (see diagram above for approximate location of quake’s epicenter). During the quake, a large section of seafloor was uplifted along the fault where the quake occurred, producing a large, Pacific-wide tectonic tsunami. The most detailed, and well documented accounts of the 1946 Aleutian tsunami come from Scotch Cap, located on Unimak Island, and the Hawaiian Islands. Despite its enormous size at Scotch Cap, the 1946 tsunami had little effect on the Alaskan mainland, due to the presence of the Aleutian Islands, which absorbed the brunt of the tsunami’s power, shielding the mainland.

During the early morning hours of March 9, 1957, a magnitude 8.3 earthquake struck along a section of the Aleutian Trench located south of the Andreanof Islands (the section of the Aleutian Islands shown above). The vertical seafloor displacement that accompanied this quake generated a major Pacific-wide tectonic tsunami, similar to the 1946 Aleutian event, but fortunately smaller. The 1957 event is not as well documented as that of 1946, which is probably do to the fact that it struck hardest at the sparsely populated Aleutian Islands, while more populated areas, such as Hawaii and California, received smaller waves.

Lituya Bay, located within Glacier Bay National Park, along Alaska’s southeastern coast (see map above), was the site of one of the largest local tsunamis ever recorded. On the night of July 7, 1958, a magnitude 8.0 earthquake occurred along the Fairweather Fault, the trace of which runs along the far northwestern portion of the bay. The epicenter of this quake was a scant 13 miles from Lityua Bay. The earthquake caused a large landslide in the bay, which produced a local tsunami of frightening size.

During the evening of March 27, 1964 (good Friday!), the area of Prince William Sound, in Southeastern Alaska (see figure above), was struck by a moment magnitude 9.2 earthquake, the largest ever recorded in North America. The quake was accompanied by large vertical displacements over an approximate 200,000 square mile area along the source fault, much of this beneath Prince William Sound. This vertical displacement generated a major tectonic tsunami that struck the southeast coast of Alaska, the Pacific Coast of British Columbia, and west coast of the United States. In addition to the tectonic tsunami, the violent shaking during the earthquake caused many large landslides and submarine slumps, which in turn produced destructive local tsunamis at many locations along the Alaskan coast. Due to the orientation of the fault that generated the tsunami, the largest waves outside of Alaska, occurred along the northwest Pacific coasts of Canada and the United States. Read more on Alaskan tsunamis here.