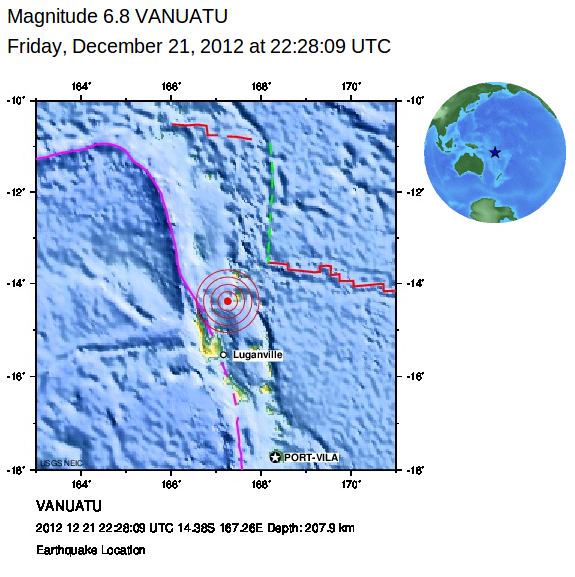 GDACS said that this earthquake can have a low humanitarian impact based on the Magnitude and the affected population and their vulnerability. There are about 20000 people living within 100 km.

There is no tsunami expected.

Australia-Pacific convergence rates increase northward from 80 to 90 mm/yr along the North New Hebrides trench, but the Australia plate consumption rate is increased by extension in the back arc and in the North Fiji Basin. Back arc spreading occurs at a rate of 50 mm/yr along most of the subduction zone, except near ~15°S, where the D’Entrecasteaux ridge intersects the trench and causes localized compression of 50 mm/yr in the back arc. Therefore, the Australia plate subduction velocity ranges from 120 mm/yr at the southern end of the North New Hebrides trench, to 40 mm/yr at the D’Entrecasteaux ridge-trench intersection, to 170 mm/yr at the northern end of the trench.

Large earthquakes are common along the North New Hebrides trench and have mechanisms associated with subduction tectonics, though occasional strike slip earthquakes occur near the subduction of the D’Entrecasteaux ridge. Within the subduction zone 34 M7.5+ earthquakes have been recorded since 1900. On October 7, 2009, a large interplate thrust fault earthquake (M7.6) in the northern North New Hebrides subduction zone was followed 15 minutes later by an even larger interplate event (M7.8) 60 km to the north. It is likely that the first event triggered the second of the so-called earthquake “doublet”. More information on regional seismicity and tectonics