Sun turns black! Fear not, it's only SDO eclipse season

NASA's Solar Dynamics Observatory (SDO) has moved into its second eclipse season of 2012. September 6, 2012, marks the first day of the SDO Fall Eclipse Season. Today's eclipse lasted 8 minutes and 15 seconds only.  Earth blocks SDO's view of the sun for a period of time each day. Over the next few days eclipses will grow to about 72 minutes long. From now until September 29, 2012 planet Earth moves through the field of view of NASA Solar Dynamics Observatory's telescopes. 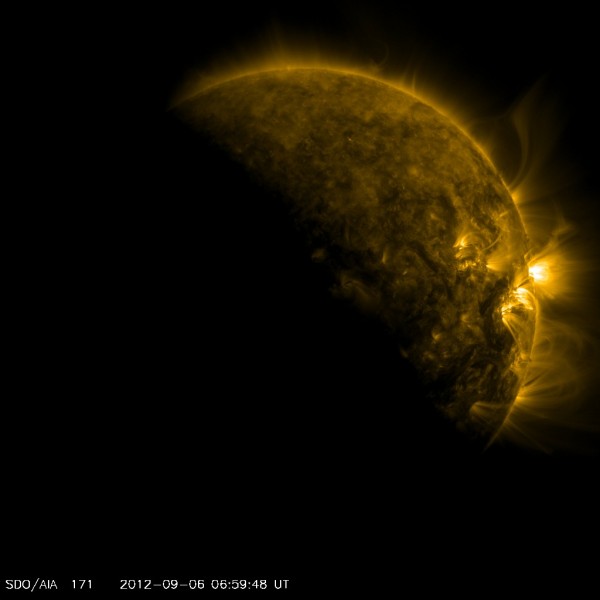 Eclipses happen near the solstices when the Sun, Earth, and the SDO orbit come into alignment. SDO is a geosynchronous observatory. SDO has no recording system so it depends from ground station. That's why SDO is placed in a geosynchronous orbit (GEO) at an altitude of 36,000 kilometres (22,000 miles), at 102° W longitude, inclined at 28.5°. It rotates at the same speed as the Earth and it is always directly above and in constant communication with its ground station in New Mexico. Because SDO is in an inclined orbit the eclipse season is not centered on the solstice.

The boundaries of the shadow of Earth on the sun are not perfectly sharp since SDO can see some light from the sun coming through Earth's atmosphere. This movie bellow shows Earth moving across the sun from 06:25 to 07:25 UTC on Sept. 6, 2012.