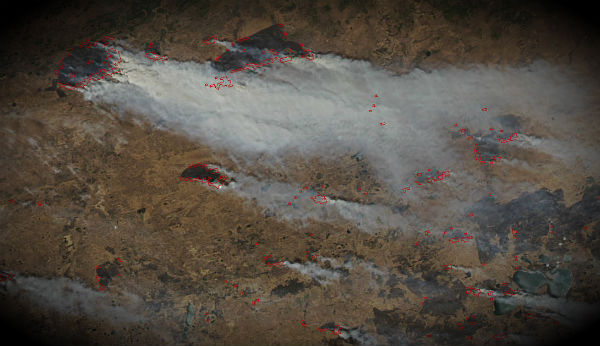 Wildfire areas enlarged three times in Siberia over the past 24 hours, according to ITAR-TAS news agency. Twenty nine outbreaks on a total area of 3,075 hectares were reported there on Tuesday morning. Seven of the outbreaks on 950.5 hectares are localized. There are 21 fires on 2,950.5 hectares in the Trans-Baikal Territory. Five fires on 930 hectares are localized. There are six large conflagrations on 2,201 hectares. Seven fires swept 103 hectares in the Novosibirsk Region. There is one outbreak on 20 hectares in Tuva. It is localized. About 200 wildfires break out each day in Russia. In an unusual case, officials recently fined a man 581 million rubles—$19.6 million—for discarding a cigarette and starting a fire that burned 2,000 hectares in 2009.

April usually brings a sharp increase in fire activity throughout Central Asia, as farmers begin to prep their fields for the coming season. This year is no exception. Many of the fires appear to be on burning on farmland and were likely started by grain farmers. The area around Omsk is one of the most productive agricultural regions in Russia; some of the main crops include wheat, rye, barley, and oats. Growers often burn debris from the previous year’s crop before replanting in order to clear the land and fertilize the soil.

Officially, both Russia and Kazakhstan prohibit farmers from burning their fields, but each spring satellites detect large numbers of agricultural fires nonetheless. Scientists can use satellites to distinguish between agricultural and wildfires because in addition to occurring on croplands, agricultural fires tend not to be as bright or long-lasting. 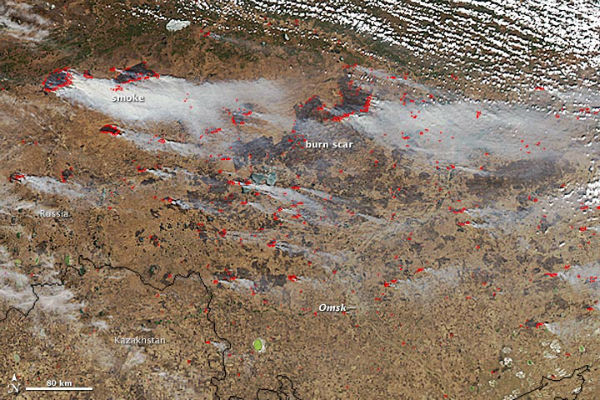 In one study that used MODIS measurements, scientists tallied the global distribution of agriculture fires and found that between 18 and 29 percent of the fires in central Asia were agricultural in origin. Researchers also found that Russia was responsible for an estimated 31 to 36 percent of the world’s agricultural fires—more than any other country.

What begins as a controlled agricultural fire, however, can easily morph into a raging wildfire in this part of the world. In Omsk, forests cover about 30 percent of the landscape and fires can easily spread. Many cultivated fields are adjacent to abandoned fields and wild grasslands, remnants of large farming cooperatives that collapsed with the USSR. (Forests are densest in the upper left of the image, and some of the fires in these areas have likely become uncontrolled forest fires).

“The human factor continues to play the negative role. Ninety-nine percent of all fires are started by negligence, prank, or carelessness!” Director of the Russian Emergency Situations Ministry, Sergei Didenko