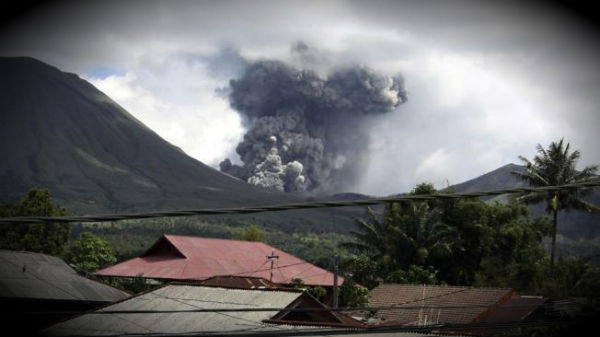 After several days of increased activity, North Sulawesi’s Mount Lokon erupted at 10:20 a.m. Tuesday, the National Disaster Mitigation Agency (BNPB) has announced. The height at which lava shot out of the volcano was unknown because clouds were blocking the full view. The agency declared areas within a 2.5 kilometers radius from the mountain’s peak dangerous and urged nearby residents to stay alert. Local residents around Mount Lokon in Tomohon, North Sulawesi, have been asked to evacuate the area, following the mountain’s steady increase of activity since 4 p.m. Monday. Center of Volcanology and Geological Hazard Mitigation (CVGHM)  advised community to remain calm and do not trust the local government issues, which is unreliable source.

CVGHM reported that during the morning on 24 April diffuse white plumes rose 25-50 m above Tompaluan crater, in the saddle between the Lokon-Empung peaks. Later that day an eruption was accompanied by loud “thumping” noises heard at local observation posts, though fog prevented views of the crater. The next day diffuse white plumes rose 50-100 m above the crater. The Alert Level remained at 3 (on a scale of 1-4). Mt Lokon is located on the outskirts of Tomohon. It is 1,580 meters high and is located 20 kilometers west from Manado, North Sulawesi.

The threat of danger to the current eruption is accompanied by a burst of magmatic material sized incandescent lapilli and ash with or without thick pyroclastic flow followed by a sudden eruption. When the last of hot cloud around G. Lokon, then the community to be aware of the occurrence of pyroclastic flow on S. Pasahapen. The potential for eruption is still possible, but the incidence of these eruptions is not known when and how much intensity.

“There might be other eruptions. We call on the residents to stay calm,” agency spokesman Sutopo Purwo Nugroho said in a statement sent to The Jakarta Post.

According to the Volcanic and Geological Disaster Mitigation Center (PVMBG), Mt Lokon last erupted on June 14, 2011, sending ash and debris 1,500 meters into the sky. The following day, another eruption threw volcanic material 600 meters into the air. Two residents died as a result of the eruptions.

Other eruptions occurred in 1991 and 2001, with the earlier one causing Rp 1 billion (US$108,000) in damage, as well as the death of Swiss tourist Vivian Clavel. The 2001 eruption covered Manado in ash and debris. The dust coming from the mountain formed a 400 meter plume.

The twin volcanoes Lokon and Empung, rising about 800 m above the plain of Tondano, are among the most active volcanoes of Sulawesi. Lokon, the higher of the two peaks (whose summits are only 2.2 km apart) has a flat, craterless top. The morphologically younger Empung volcano has a 400-m-wide, 150-m-deep crater that erupted last in the 18th century, but all subsequent eruptions have originated from Tompaluan, a 150 x 250 m wide double crater situated in the saddle between the two peaks. Historical eruptions have primarily produced small-to-moderate ash plumes that have occasionally damaged croplands and houses, but lava-dome growth and pyroclastic flows have also occurred.(Global Volcanism Program)