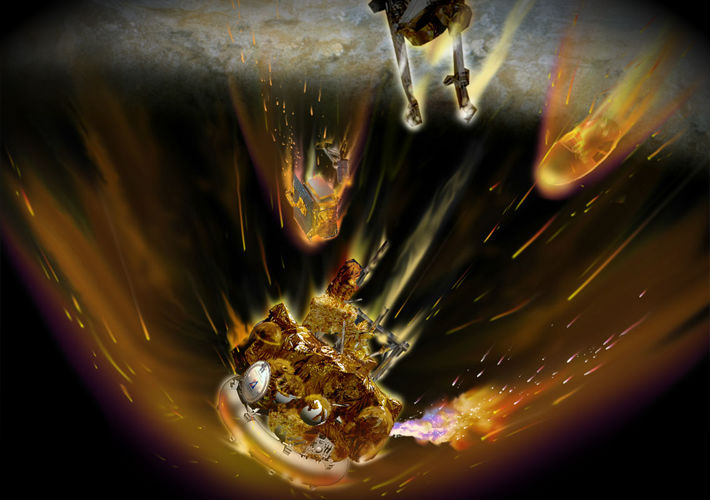 The Phobos-Grunt re-entry story is finally over. According to Russian news reports a failed probe crashed over the Pacific Ocean. Latest reports indicate that Phobos-Grunt spacecraft fell around 17:45 UTC on January 15 slamming into the atmosphere over a stretch of the southern Pacific off the coast of Chile, about  1,250 kilometers (777 miles) west of Wellling Island and its fragments have crashed down in the Pacific Ocean. The report comes from an official with Russia’s Defense Ministry. At the moment, it’s not clear how many fragments of Phobos-Grunt survived, or exactly where  debris touched down. What is the status of toxic reservoir or LIFE biomodule still remains unknown. Russian officials have repeatedly stated that there’s little danger of contamination from a tiny amount of radioactive material onboard Phobos-Grunt, about 10 micrograms of Cobalt-57 that forms part of a science instrument on the craft. Experts point that tanks are made of  aluminium which rarely survives re-entry.

RIA Novosti news agency, however, cited Russian ballistic experts who said the fragments fell over a broader patch of Earth’s surface, spreading from the Atlantic and including the territory of Brazil. It said the midpoint of the crash zone was located in the Brazilian state of Goias. Phobos-Grunt was also carrying China’s small craft Yinghuo-1 which is their first attempt at a Mars orbiter, along with LIFE experiment run by the US-based Planetary Society designed to study how a long journey through deep space affects micro-organisms. Planetary Society has said that its project — the Living Interplanetary Flight Experiment, or LIFE — may survived re-entry, since it was tucked inside Phobos-Grunt’s return capsule. If the return capsule survives it may even be possible to salvage microorganisms. It may even be possible to salvage some science out of LIFE, researchers say, but only if the return capsule survives and is recovered. 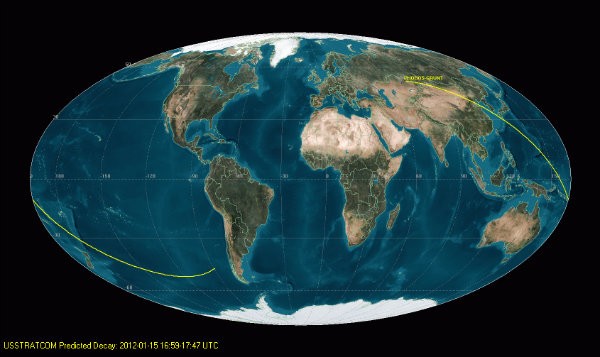 Phobos-Grunt was the third uncontrolled re-entry of a big spacecraft in the last four months along with UARS and ROSAT. NASA’s 6.5-ton UARS satellite came down in September, and the 2.7-ton German satellite ROSAT followed one month later -both crashed in ocean. UARS and ROSAT were decommissioned satellites that finished their missions years ago and then crushed downward in slowly decaying orbits. At 14.5 tons, the Russian Mars probe was the most massive satellite to fall uncontrolled to Earth since NASA’s 85-ton Skylab space station in 1979. Russia’s 135-ton Mir space station remains the largest single man-made object to re-enter our atmosphere. (Mir was de-orbited 2001.) (Space.com)

The return of Phobos-Grunt was being monitored by dozens of organizations, including the Inter-Agency Space Debris Coordinating Committee, an offshoot of the UN Committee on the Peaceful Uses of Outer Space. The panel includes representatives from 12 space agencies, among them the US, Russia and China. For now, all the facts remain unknown so stay tuned for new updates! Thank you for watching with us this spectacular event!