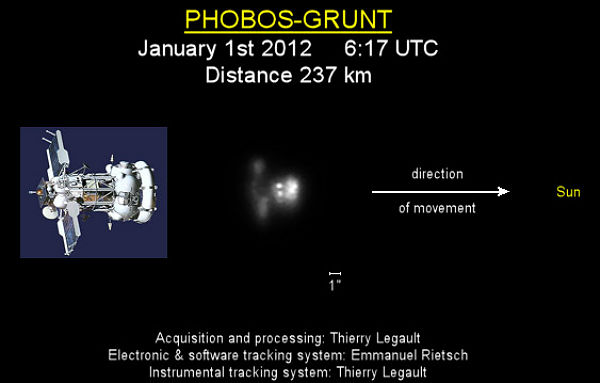 The theory that Russia’s Mars mission failed due to a U.S. radar is extremely “exotic,” Russian scientists said on Tuesday. Phobos-Grunt, Russia’s most ambitious planetary mission in decades, was launched on November 9 but it was lost due to a propulsion failure and fell back to Earth on Sunday.

The crash could have been caused by a powerful electromagnetic emission from a U.S. radar in the Pacific Ocean, the Kommersant daily reported earlier on Tuesday citing an unnamed source in the Russian space industry. The source stressed that it was more likely an accident rather than an act of sabotage.

“Consider the power of the impact. I don’t think the Americans have radars capable of ensuring such power at such an altitude

He suggested the theory was just a blind to cover up some people’s mistakes.

“I simply think that is disingenuous. It is convenient to find the cause of the failure on the outside,” he said, adding that “external impact hypotheses” were “far-fetched.”

“The spacecraft itself should be examined first. There are problems there,” he said.

His view was echoed by Viktor Savorsky, a researcher at the Russian Academy of Sciences Institute of Radio Technology and Electronics.

Federal Space Agency Roscosmos chief Vladimir Popovkin suggested on Monday that certain forces in the Western Hemisphere, which is a shadow zone for Russia, might be shooting down Russian spacecraft.

“I don’t want to make any accusations, but at present there are powerful technologies that can impact spacecraft, and their usage cannot be ruled out,” Popovkin said in an interview with the Izvestia daily.

According to NASA, Russia has failed in all 17 of its attempts to study the Red Planet close-up since 1960. The most recent failure before November 2011 occurred in 1996, when Russia lost its Mars-96 orbiter during launch.