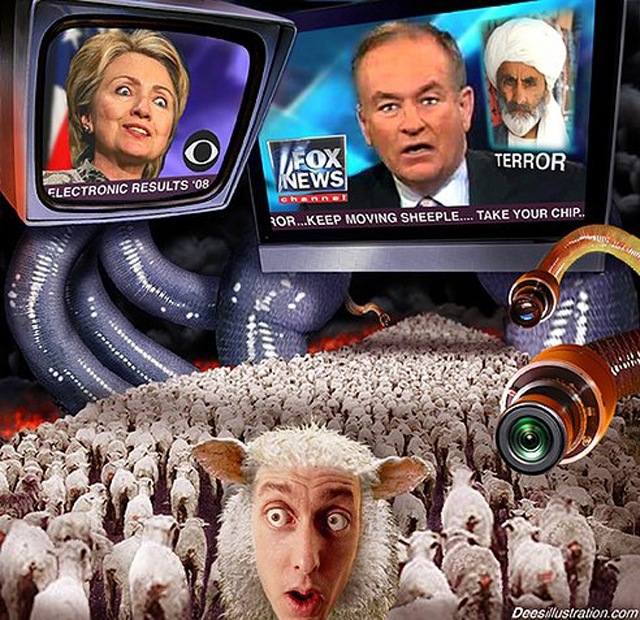 Scientists at the University of Leeds have conducted research that proves the tendency many have to act like sheep, unwittingly following crowd as if they didn’t possess a reasoning mind. While this tendency may have its uses in some situations, such as planning pedestrian flow in busy areas, it doesn’t inspire a ton of hope for humankind.

The study showed that it takes a minority of just five percent to influence a crowd’s direction – and that the other 95 percent follow without even realizing what is going on.

Professor Krause, with PhD student John Dyer, conducted a series of experiments in which groups of volunteers walked randomly around a large hall. Within the group, a few received instructions regarding where to walk. Participants were not allowed to communicate with one or intentionally influence anyone.

The findings in all cases revealed that the informed individuals were followed by the others in the crowd, forming a self-organizing, snake-like structure (or flock of sheep, take your pick).

“We’ve all been in situations where we got swept along by a crowd,” said Professor Krause. “But what’s interesting about this research is that our participants ended up making a consensus decision despite the fact that they weren’t allowed to talk or gesture to one another. In most cases the participants didn’t realize they were being led by others at all.”

Scary. Are we such sheeple that we allow a few “informed” people to lead us around without even knowing what’s happening? Sadly, it makes sense. How many fall for scams of all kinds because of friends or “informed” sources, from pyramid schemes to religious hoaxes and political coverups. We seem to believe just about anything, or blindly tolerate it as long as the message is delivered with enough social credibility.

How to be your own person

There some things you can do to not only avoid living as a sheeple, but enjoy a full, prosperous and exciting life to boot. Here are a couple of the fundamentals that sheeple tend to miss.

Determine what you want in life. Over 25 years teaching Neuro Linguistic Programming (NLP) I’ve asked thousands of people the question what do you want? I’ve been amazed at the incredibly low percentage of people who can answer it. What are your primary goals? Which direction are you headed? Where do you want to be in five years? The most common answer: I don’t know. We’ll see what happens. Perhaps one in ten can answer with certainty and specificity, which looks like this:

My top 3 goals right now are…

In five years my life will be different in the following, specific ways…

The primary obstacles in my way are the following…

No one can predict the future, but few things serve us better than intentionally pursing a chosen future, rather than waiting to “see what happens.” If you do not choose your goals, your family, friends, community and culture will do so for you (knowingly or unknowingly). This is called status-quo. Not surprisingly, status quo is not that inspiring.

Learn to make intentional, full decisions. So many of our decisions are not well considered. In NLP, we learn that decisions and motivation are simply comprised of visual, auditory and kinesthetic (feeling oriented) phenomena. These are the building blocks of mental processes. Bad decisions, impulsive decisions and ultimately regrettable decisions are so often missing a building block. We make impulse decisions without discussing things (missing the auditory). We make emotional decisions without considering other options (missing visual and auditory). Or we get caught in mental loops with no exit (endless internal dialogue with no feeling that prompts toward action).

In all of these cases, because we lack the foundation for solid decisions, we are vulnerable to the whims of others. If we lack the ability to discuss and analyze decisions, we may accept someone else’s analysis as gospel. If we tend to make emotional decisions, we may fall prey to whomever can pump us up into an emotional state. If we can’t bring our thoughts to completion with a feeling of certainty, we may just do what others are doing to get ourselves out of the endless internal loop.

Fascinating we don’t teach goal setting and decision making skills in our education system. These help form the foundation of real character and individuality – and protect us from over dependency on the ideas or opinions of others.

Make your decisions with all of your building blocks in place and with a clear set of goals in mind. This will keep you out of the realm of the sheeple.

But don’t take my word for it. Think it through.

Sources for this article include:
http://psychcentral.com/news/2008/02/15/herd-mentality-explained/1922.html

About the author:
Mike Bundrant is the founder of the iNLP Center, which offers online NLP training to help you multiply your effectiveness in every area of life. To receive a free personal development mini-course, visit iNLP Center.