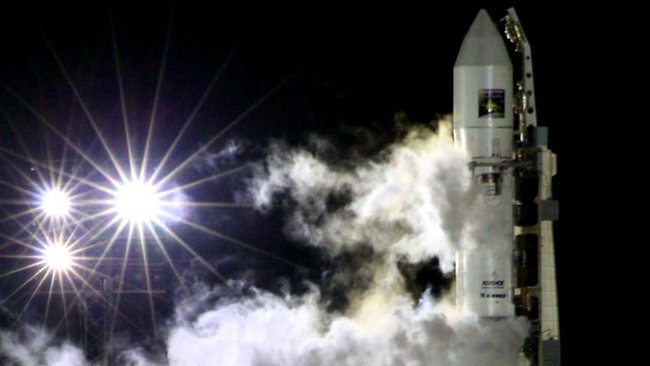 Phobos-Grunt, the Russian interplanetary mission is coming back little to early. Following a successful launch from Russia’s Baikonur Cosmodrome in Kazakhstan and the subsequent separation of the Phobos-Grunt probe from its booster rocket on Wednesday morning, its own engine failed to generate two impulses which were necessary to direct the spacecraft onto a path to Mars. As a consequence, the probe became stuck in a low transitory orbit above Earth. 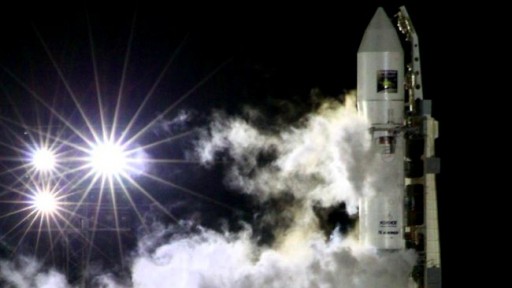 “The engine installation did not function properly: it gave neither the first, nor the second impulse. This means that  the head of Russia’s Roskosmos space agency, Vladimir Popovkin, told journalists on Wednesday.

And now, we are discussing uncontrolled reentry scenarios. To be more precise, we are looking here at an uncontrolled toxic reentry scenario. “Phobos-Grunt”  is fully-laden with unsymmetrical dimethylhydrazine and nitrogen tetroxide. So, we are talking about ten tons of fuel and oxidizer. The probe itself weighs-in at only three tons. The majority of the fuel will likely vaporize during reentry. There’s also a small quantity of radioactive cobalt-57 in one of the science missions housed in the probe. If Russian specialists fail to determine and fix the issue and the spacecraft eventually falls to Earth, they may have to come up with a contingency plan to deal with the potential hazard to large areas. Latest reentries ended up with splash-down in an ocean (which covers two-thirds of Earth, fortunately)  so in best scenario Fobos would end the same way – in an ocean. Russian media already dubbing Phobos-Grunt as “Most toxic falling satellite ever.” The Russian space agency ROSCOSMOS still didn’t issued any official statement about the Phobos-Grunt situation. Though Russian mission controllers are frantically trying to regain control of the craft, it’s not looking good. Today’s efforts are widely regarded as a last-ditch attempt to salvage the mission. Other space agencies such as NASA and ESA have offered to assist, but it’s looking like the probe is quickly becoming unrecoverable. (DiscoveryNews)

“Last night there were several attempts to obtain telemetry information from the unit. All of them ended with a zero result. The probability of saving the (probe) is very, very small,” an anonymous industry source told Interfax.

Since Pobos-Grunt was placed in low-Earth orbit (LEO) on Tuesday, and the probe successfully separated from its booster rocket, its attached cruise stage rocket has yet to light up, providing a critical two burns to blast the probe away from Earth to begin its planned 10-month journey to Mars. It is unknown whether there’s a software error or hardware glitch, but attempts to upload new commands to the on board computers have so far failed to change the situation. Fobos-Grunt’s batteries are draining and its orbit is degrading. If the problem turns out to be a hardware failure, the consequences could potentially be disastrous, and not for the space mission alone. It looks as if the probe will reenter later this month/early December. RIA Novosti quotes an unnamed scientist who insists that the time scale for the probe’s possible controlled exit from the orbit before being directed into its intended trajectory, is somewhere between one week and one month. NORAD is putting a Nov. 26 reentry date on Phobos-Grunt. It is almost impossible to predict the exact area where the spacecraft might fall, but scientists say the probe’s orbit takes it between the latitudes 51.4 degrees North to 51.4 degrees South – and most of the world’s population lives within that zone. Phobos-Grunt could come down anywhere. it could be anywhere between 52 degrees North and 52 degrees South– an enormous territory. Yet this is exactly where our planet’s most-densely populated areas are located. 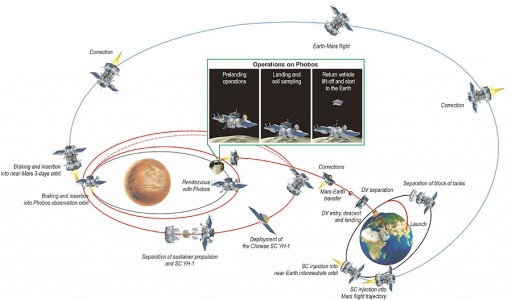 This will be the third large piece of space junk to reenter in an uncontrolled manner this year. In September, NASA’s 6-ton UARS atmospheric satellite burned-up over the Pacific. In October, the German 2.4-ton ROSAT X-ray space mission reentered over the Bay of Bengal. Like UARS and ROSAT, the likely Fobos-Grunt reentry will be uncontrolled and at the mercy of a highly dynamic upper atmosphere. Also,  Despite the fact that pieces of the probe will hit the ground, it is still extremely unlikely it will cause death and destruction, however.

The Phobos-Grunt probe was designed to analyze the surface of Mars’s biggest moon, Phobos, and bring 100-200 grams of its soil back to Earth. It weighs over 13,000 kilos, but only seven kilos placed on the top of the return rocket are to make it back to Earth. The spacecraft will also carry various terrestrial microorganisms, which Russian and US scientists are sending in a capsule on the three-year round trip in order to test their ability to survive in the harsh conditions of open space with its high levels of radiation. Also on board is China’s first Mars satellite, which is to be put in observation orbit around the Red Planet. (RT) 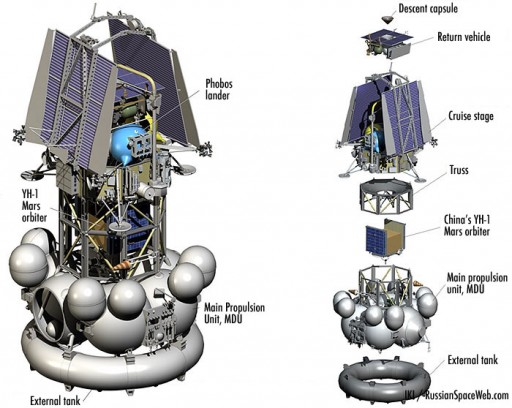 December 5, 2010 as a result of the unsuccessful launch of the Pacific Ocean fell just three satellite “GLONASS-M.”  As a special commission found, the satellites were lost due to the fact that the upper stage of an error in the design documentation poured 1.5 tons of extra fuel. The second accident occurred in February when the geodesic into orbit vehicle for military purposes, “Geo-IK-2.”Booster “Rokot” fulfilled normally, but at the site of the upper stage “Breeze-KM ‘development and production of the Khrunichev Space Center, there was an emergency situation, which resulted in the satellite” Geo-IK-2 “was placed in an unplanned orbit. In June, it was unofficially declared a total loss of the device. August 18 carrier rocket “Proton-M” with the upper stage “Breeze-M” satellite “Express-AM4” launched from the Baikonur Cosmodrome. Booster, as in previous failed launches, develop normally. On the site of the booster between the fourth and fifth placing it on the main engine stopped transmission of telemetry data to Earth. At the estimated time the machine is not on the phone. Another accident occurred on August 24, when the carrier rocket “Soyuz-U” with a cargo spacecraft “Progress M-12M” was launched from Baikonur. Because of the accident propulsion third stage rocket ship was launched into orbit. The debris fell in the Altai. (Interfax)