A solar radiation storm is in progress around Earth. At the moment, the storm is classified as minor, which means it has little effect on Earth other than to disturb HF radio transmissions at high latitudes. Energetic protons, which make up the bulk of the storm, were accelerated in our direction earlier today by shock waves in a CME racing away from the sun at about 1000 km/s (2.2 million mph). According to analysts at the Goddard Space Weather Lab, the CME itself will reach Earth on Nov. 28th around 14:23 UT (+/- 7 hours). The forecasting group at Goddard notes that no two spacecraft have yet beamed back concurrent images of the CME. This makes their estimates of the CME's speed and direction necessarily approximate.  (SpaceWeather) 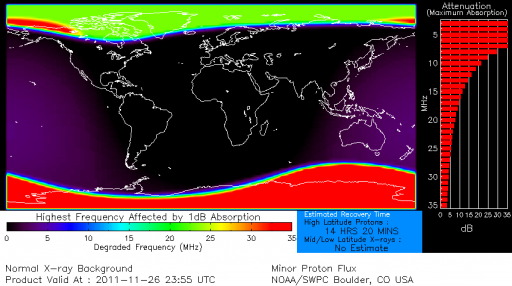 The cloud could triggger geomagnetic storms when it arrives on Monday. High-latitude sky watchers should be alert for auroras. Click to view an animated forecast track

The image below is captured by Lasco C2 and in the new STEREO Ahead COR2 images, it does appear that most of the explosion was directed to the west and not towards Earth.

NOAA Space Weather Prediction Center reported that  S1 (minor) solar radiation storm began a few hours ago and continues. The source of this event is not clear, although there has been CME and very small long-duration x-ray flare activity that preceded it. SWPC forecasters are lookng for a return to more normal conditions over the next 24 hours.