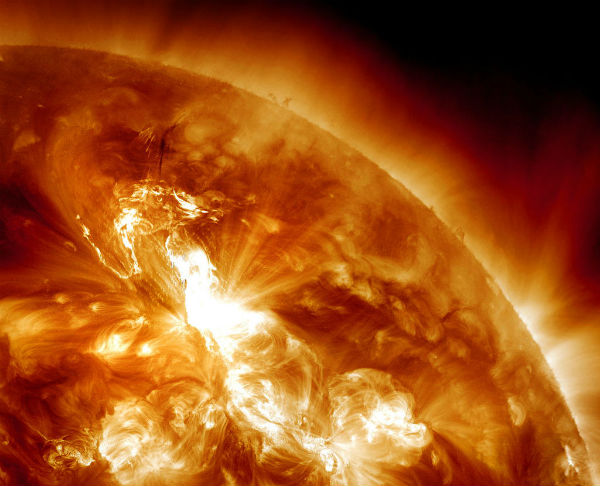 Growing Sunspot 1402 erupted in morning of January 23, 2012 around 04:00 UTC, producing a long-duration M8.7 solar flare. Each category for x-ray flares (B,C,M,X) has nine subdivisions ranging from  C1 to C9, M1 to M9, and X1 to X9. This one ranks M9, which is only one subdivision under X-class solar flare which classifieds as major events that can trigger planet-wide radio blackouts and long-lasting radiation storms. This is a relatively substantial and fast-moving (2200 km/s) CME that could affect spacecrafts in geosynchronous, polar and other orbits passing through Earth’s ring current and auroral regions. This event did produce an asymmetric Full-Halo Coronal Mass Ejection (CME), and is partially Earth directed. 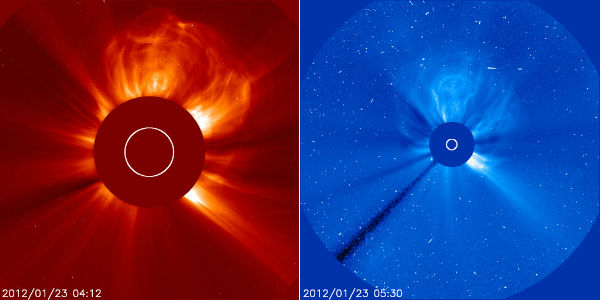 Just like the previous event on Jan 19, most of the plasma cloud appears to be directed north. Strong geomagnetic storms are expected. On the NOAA scale of radiation storms, this one ranks S3. NOAA uses solar radiatio scale of 5 levels – S1 being minor and S5 extreme (complete blackout of high frequency communications). A 19 minute long, 10cm Radio Burst (TenFlare) was detected. NOAA’s Space Weather Prediction Center has issued a geomagnetic storm watch, and as a precaution, polar flights on Earth are expected to be re-routed within the next few hours.

The radiation storm that began early this morning has continued to rise very slowly throughout the day but has remained at the S3 (Strong) level.  It should be at or near its peak and is expected to begin to decrease soon. Earth is still awaiting the arrival of the Coronal Mass Ejection which is still expected at about  14:00 UTC on Tuesday.  Analysts at the Goddard Space Weather Lab say the CME will reach Earth on Jan. 24 at 14:18 UTC (giving +/- 7 hours tolerance). Mars is also in the path of CME that will impact the Red Planet during the late hours of Jan. 25. The NOAA/SWPC forecast is for Moderate (G2) level geomagnetic storming with G3 levels possible with proton 100MeV Integral Flux above 1pfu is expected. All this activity is related to a moderate (R2) Radio Blackout x-ray flare that erupted Sunday night. It is the strongest storm since December, 2006, and not 2005 as everybody else reports.  In the meantime, you can follow the radiation storm here. So long as the red trace is above the dashed line, we are at alert levels.  The event still rising at this time.

S3 solar radiation storm is classified as STRONG radiation storm that can cause isolated reboots of computers onboard Earth-orbiting satellites and made noise in imaging systems, reduction of efficiency in solar panel, it can degraded HF radio propagation through the polar regions and caused errors at navigation position. S3 solar radiation storm can also influenced passengers and crew in  high-flying aircraft at high latitudes due to radiation exposure. At this level of solar radiation astronauts on EVA are reccomended to take radiation hazard avoidance. High energy particle measurements (>100 MeV) are a better indicator of radiation risk to passenger and crews. Pregnant women are particularly susceptible. NASA routinely monitors space weather conditions to determine any potential hazards to the astronauts aboard the International Space Station. Based on the agency’s assessment, the six spaceflyers currently living and working on the orbiting outpost are not in any danger.

A Solar proton event occurs when protons emitted by the Sun become accelerated to very high energies either close to the Sun during a solar flare or in interplanetary space by the shocks associated with coronal mass ejections. These high energy protons cause several effects. They can penetrate the Earth’s magnetic field and cause ionization in the ionosphere. The effect is similar to auroral events, the difference being that electrons and not protons are involved. Energetic solar protons are also a significant radiation hazard to spacecraft and astronauts. During strong solar flare events (such as this one), protons can be produced with sufficient energies to penetrate deeper into the Earth’s magnetosphere and ionosphere. Regions where deeper penetration can occur includes the north pole, south pole, and South Atlantic magnetic anomaly. Energetic proton storms can also electrically charge spacecraft to levels that can damage electronic components. They can also cause electronic components to behave erratically. 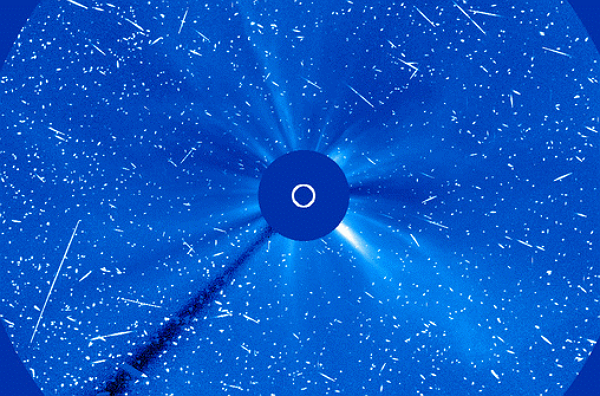 When solar protons enter the domain of the Earth’s magnetosphere where the magnetic fields become stronger than the solar magnetic fields, they are guided by the Earth’s magnetic field into the polar regions where the majority of the Earth’s magnetic field lines enter and exit. The majority of the energy is extinguished in the extreme lower region of the ionosphere (around 50-80 km in altitude). This area is particularly important to ionospheric radio communications because this is the area where most of the absorption of radio signal energy occurs. The enhanced ionization produced by incoming energetic protons increases the absorption levels in the lower ionosphere and can have the effect of completely blocking all ionospheric radio communications through the polar regions.

The more severe proton events can be associated with geomagnetic storms that can cause widespread disruption to electrical grids. However, proton events themselves are not responsible for producing anomalies in power grids, nor are they responsible for producing geomagnetic storms. Power grids are only sensitive to fluctuations in the Earth’s magnetic field. 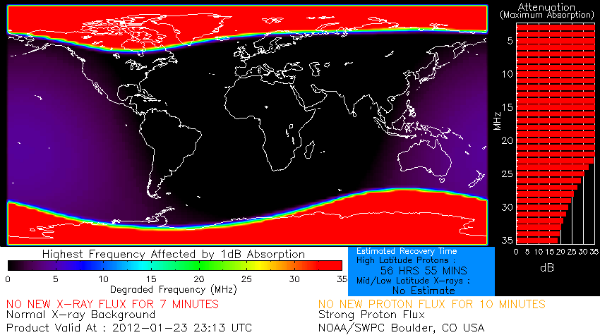 Conditions in the D region of the ionosphere have a dramatic effect on high frequency (HF) communications and low frequency (LF) navigation systems. The global D Region Absorption Predictions (D-RAP) depicts the D region at high latitudes where it is driven by particles as well as low latitudes, where photons cause the prompt changes.

The precipitation of protons (as well as other ions) into the earth’s atmosphere during the Solar Energetic Particle (SEP) events can also create significant enhancements of ionospheric electron densities in the D region. Solar protons with energies between 1 to 200 MeV are primarily responsible for most of ionization of the D region and, consequently, for the ionospheric absorption of HF radio waves. Because of shielding of the earth by its magnetic field SEPs find easy access to the atmosphere only in high latitude regions around the earth’s geomagnetic poles.

The D region electron density is directly driven by the total X-ray flux regardless of the source, so these periods of high background flux are equally important to radio absorption. Due to geometric effects, D region ionization by solar X-rays is greatest at the sub-solar point, where the sun is directly overhead. The amount of ionization and absorption falls with distance away from the sub-solar point, reaching zero at the day/night terminator. The night-side of the Earth is unaffected.

Life on earth would be impossible without the sun. Our atmosphere protects us from the more dangerous aspects of solar radiation. Solar radiation is the total frequency spectrum of electromagnetic radiation produced by the sun. This spectrum covers visible light and near-visible radiation, such as x-rays, ultraviolet radiation, infrared radiation, and radio waves. Solar radiation affects different parts of the Earth in different ways, with extremes manifesting in equatorial regions and the poles.

Solar activity reached high levels. Region 1402 (N28W36) produced a long-duration M8/2b flare at 23/0359Z. Associated with this event were multi-frequency radio emissions spanning 25 MHz through 15.4 GHz including a 5100 sfu Tenflare. SOHO/LASCO observed an asymmetric, full-halo CME, first observed in C2 imagery at 27/0412Z as a bright halo over the northern hemisphere. Model output suggests potential Earth impact midday on
24 January. Region 1402 showed some umbral separation in the large leader spot. Region 1401 (N16W39) produced a C1/Sf at 23/2011Z. The remainder of the disk was quiet and stable. Solar activity is expected to be low during the period (24 – 26 January) with M-class activity likely from Regions 1401 and 1402.

The geomagnetic field is expected to range from quiet to isolated severe storm levels on day one (24 January). Mostly quiet levels are expected through midday on 24 January when the anticipated arrival of the 23 January CME is expected to affect the field. Active to major storm levels, with isolated severe storm periods, are expected for the remainder of day one. By day two (25 January), field activity is expected to
decrease to unsettled to active levels, with isolated minor storm periods, as effects from the CME wane. Day three (26 January) should see a return to mostly quiet conditions.

Currently, Sun is in the midst of Solar Cycle 24, and activity is expected to ramp up toward solar maximum in 2013. 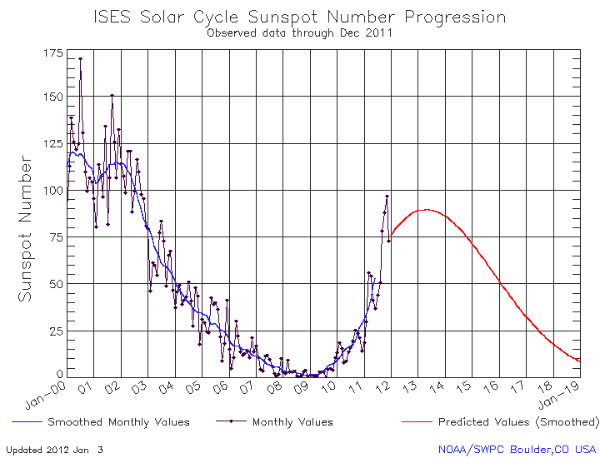