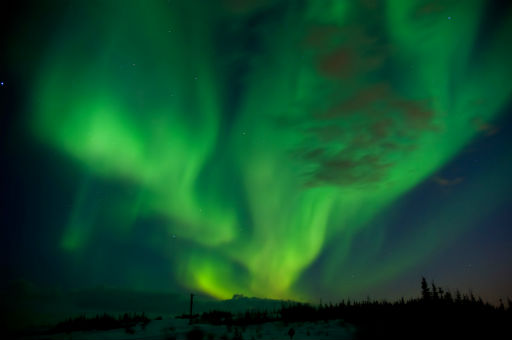 A solar radiation storm is in progressaround Earth. At the moment, the storm is classified as minor, which means it has little effect on our planet other than to disturb HF radio transmissions at high latitudes. Bigger effects, however, may be in the offing. The same explosion on Nov. 26th that caused the radiation storm also hurled a CME into space at about 930 km/s (2 million mph). According to analysts at the Goddard Space Weather Lab, the CME will reach Earth on Nov. 28th at 17:21 UT (+/- 7 hours). Click to view an animated forecast track: 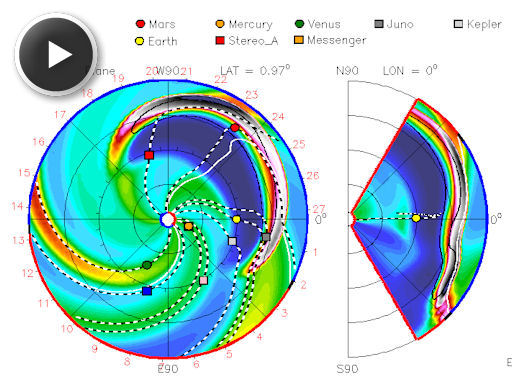 The impact of the cloud could trigger a geomagnetic storm. Indeed, NOAA forecasters estimate a 58% chance of severe storming around the poles when the CME arrives. High-latitude sky watchers should be alert for auroras after nightfall on Monday. (SpaceWeather)

Early Saturday morning, a solar filament exploded in the northwest quadrant, causing a bright Coronal Mass Ejection. It does appear that a majority of the plasma cloud was directed to the west, however the eastern flank of this event may still sweep past Earth by Monday. The proton levels reached the S1 Minor Radiation Storm threshold and currently remain above that level on Sunday. (SolarHam) 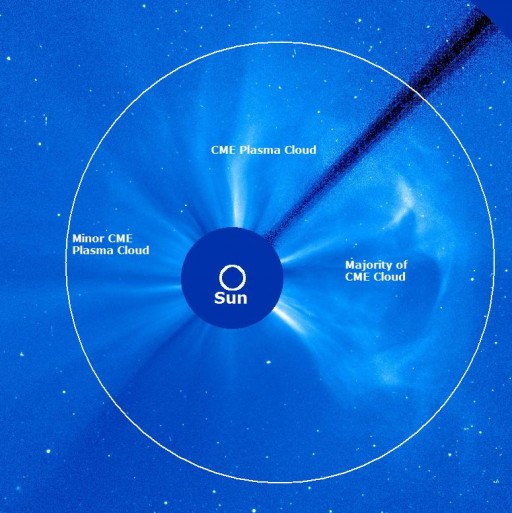 While looking at the new Lasco images, it appears that a smaller portion of the Coronal Mass Ejection on Saturday may still impact our geomagnetic field within the next 48 hours. Geomagnetic Storming at high latitudes will be possible.

Solar events such as this can cause the Northern Lights in rare locations, but they become more common as we near solar maximum in a year or two. Because of the arrival time, if it arrives at 17:21 UT then the United States will remain in daylight, with the favored areas of Asia and Europe lighting up with the lights. Events like this can cause worldwide GPS, cellphone, and electricity outages in vulnerable spots.

On Oct.24 people could witnessed an amazing auroras all the way to Texas. The CME, which caused the auroras on Oct. 24, had south-pointing magnetic fields. They cancelled out Earth’s north-pointing fields around the equator. Thus we had the auroras. That CME was only supposed to deliver a glancing blow to earth and initialy was supposed to be Mars directed. It was forecasted only 40% chance of Active geomagnetic activity for the high latitudes but still amazing auroras was seen as far south as Alabama. Yesterday’s event has given us a 58% chance of severe geomagnetic storms for the high latitudes. So high-latitude aurora watchers could have interesting observations on Monday after nightfall, possibly even in Europe.

Daily Mail reports about at least one satellite knocked out of action by the storm. Japan’s space agency said its Kodama communications satellite had been temporarily shut down after malfunctioning. Experts say that over the next two days the Northern Lights may be seen at latitudes as low as Florida and Texas – and even south enough to cover the whole of Europe. 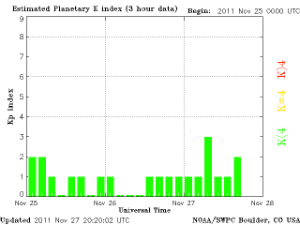 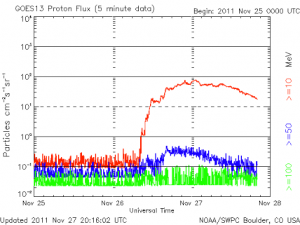 In latest solar report from Nov 27 by the U.S. Dept. of Commerce, NOAA, Space Weather Prediction Center and the U.S. Air Force it said a CME originated from the vicinity of Region 1354. This CME was first visible in LASCO C2 imagery at 27/1036Z and appears to have no Earth directed components.

At the time of this report, an Eruptive Prominence on the Limb (EPL) was recorded off the west limb around Region 1353 (N08W62). Early analysis also indicates this CME not being Earth directed. New Region 1362 (N08E76) was numbered today as it rotated onto the east limb. This event was associated with a significant increase in proton fluxes and a large full halo CME. 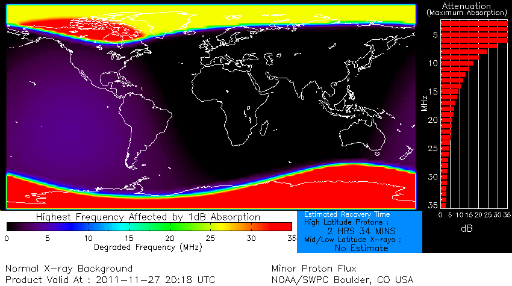 Solar wind measurements, as made by the ACE spacecraft, indicate the possible arrival of the corotating interaction region (CIR) in front of the anticipated coronal hole high speed stream (CH HSS). The greater than 10 MeV proton event that began yesterday at 1125Z is still in progress. Max flux for this event, so far, was 80 pfu at 27/0125Z.

The forecast says geomagnetic field is expected to be at unsettled to active levels with a chance for minor storm periods for the next two days (28-29 November). These elevated levels are expected due to the combination of the arrival of a CH HSS and CME effects. On day three (30 November), a slight decrease in activity to mostly unsettled levels is expected, as the effects of these two events wane according to NOAA solar report.

QUICK GUIDE THROUGH SOLAR TERMINOLOGY
When the Sun produces a Coronal Mass Ejection (CME), the ejection sends solar winds out into space. The solar winds sent out by a CME carry with it it’s own magnetic field called the Interplanetary Magnetic Field (IMF) and solar particles (density).
The strength of the CME is what determines how strong the Solar Winds are and the density varies with each CME. The stronger the CME is, the stronger the solar wind IMF is. Solar Flare and CME are NOT the same.

If a CME is Earth directed, it then sends those Solar Winds and IMF in Earths direction. The IMF is not constant and changes in strength and polarity (north/south) orientation. Earth facing magnetic filament eruptions and coronal holes also could effect Earths magnetosphere.

A solar flare is a eruption of intense high-energy radiation from the sun’s surface and reaches Earth very fast, in around 8 minutes. The levels of Flare strength are A, B, C, M and X (in order of weakest to strongest).

A CME (coronal mass ejection) is an ejection of material from the solar corona, usually observed with a white-light coronagraph. A CME may or may not be produced by the sunspot explosion. If it does produce a CME, it takes anywhere from 2 to 3 days to reach Earth, and sometimes even longer.