G1 (Minor) Geomagnetic Storm conditions are now occurring due to the arrival of the CME from May 15, 2013. During G1 Geomagnetic Storm, weak power grid fluctuations can occur, minor impact on satellite operations is possible, aurora is commonly visible at high latitudes and migratory animals are affected at this and higher levels.

Planetary K-index reached Kp=5 level. This series of CME's related to AR 1748 had a source region within 30 degrees of the solar limb, which reduces their possibility of arrival to the Earth to around 30%. 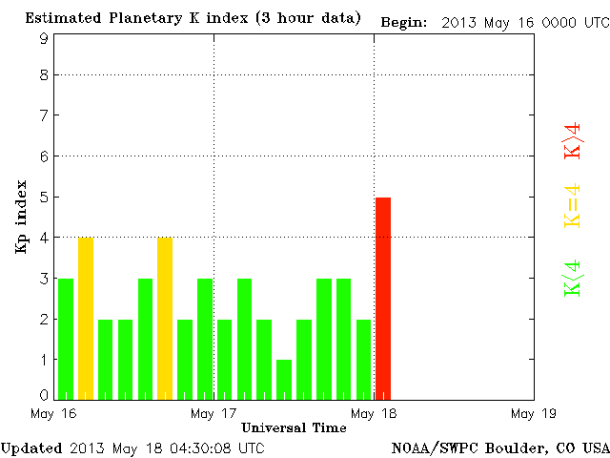 Proton levels (10MeV) are still above threshold, stable around 3 protons/cm2-s-sr. Geomagnetic conditions have been unsettled to active, due to long lasting periods of slow solar wind with sustained mild negative Bz (around -5nT). Currently, the Bz component of the interplanetary magnetic field (IMF) is tipped south.

Active Region 1748 erupted once again, this time with M 3.2 solar flare associated with the CME, at 08:57 UTC on May 17, 2013. The current Solar Radiation Storm is expected to stay at category S1 (Minor), although the proton flux may increase slightly with the passage of the shock driven by the CME. 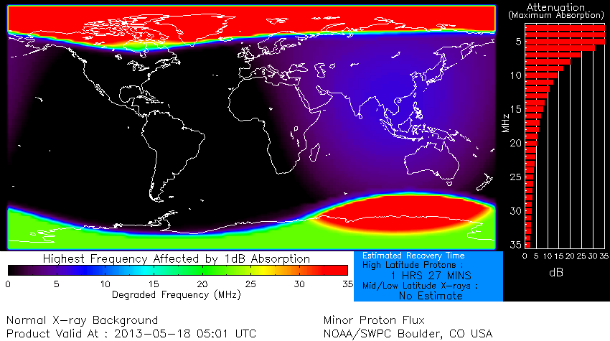 Active Region 1748 still has potential for producing X-class flares. It maintains its Beta-Gamma-Delta magnetic configuration, even though some fragmentation is seen in the trailing region and there are some indications that polarities are separating within the delta spot penumbra.