NASA has launched its next Mars rover, kicking off a long-awaited mission to investigate whether the Red Planet could ever have hosted microbial life.

The Curiosity rover blasted off atop its Atlas 5 rocket today (Nov. 26) at 10:02 a.m. EST (1502 GMT), streaking into a cloudy sky above Cape Canaveral Air Force Station here. The huge robot’s next stop is Mars, though the 354-million-mile (570-million-kilometer) journey will take 8 1/2 months.

The work Curiosity does when it finally arrives should revolutionize our understanding of the Red Planet and pave the way for future efforts to hunt for potential Martian life, researchers said. NASA began planning Curiosity’s mission — which is officially known as the Mars Science Laboratory (MSL) — back in 2003. The rover was originally scheduled to blast off in 2009, but it wasn’t ready in time. Curiosity is due to arrive at Mars in early August 2012, touching down at a 100-mile-wide (160-km) crater called Gale. Curiosity isn’t designed to search for Martian life. In fact, if the red dirt of Gale Crater does harbor microbes, the rover will almost certainly drive right over them unawares. Curiosity’s work should help later missions determine where — and when — to look. Gale Crater is 154 km (96 mi) in diameter and dominated by a layered mountain rising some 5 km (3 mi) above the crater floor which exhibits exposures of minerals that may have preserved evidence of past or present Martian life. 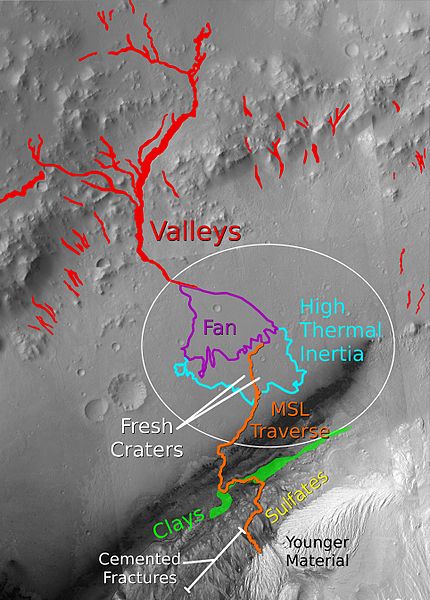 Launch windows for Mars-bound spacecraft are based on favorable alignments between Earth and the Red Planet, and they open up just once every two years. So the MSL team had to wait until 2011.

While Spirit and Opportunity each carried five science instruments, Curiosity sports 10, including a rock-zapping laser and equipment designed to identify organic compounds — carbon-based molecules that are the building blocks of life as we know it. Some of these instruments sit at the end of Curiosity’s five-jointed, 7-foot-long (2.1-meter) robotic arm, which by itself is nearly half as heavy as Spirit or Opportunity. The arm also wields a 2-inch (5-centimeter) drill, allowing Curiosity to take samples from deep inside Martian rocks. No previous Red Planet rover has been able to do this, researchers say. (Space.com) 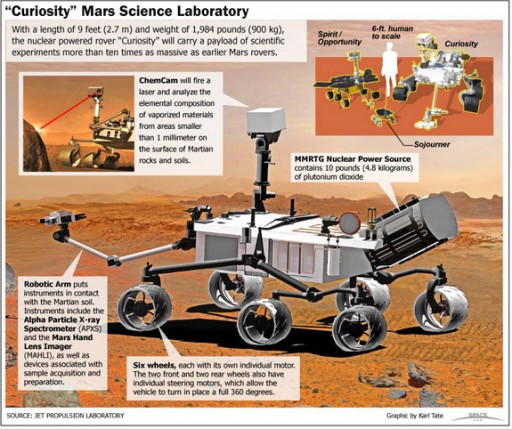 Life as we know it depends on liquid water. So the rover will likely spend a lot of time poking around near the mound’s base, where Mars-orbiting spacecraft have spotted minerals that form in the presence of water, such as clays and sulfates.