A dark plume of volcanic ash drifted from the Soufriere Hills volcano southwest across the Caribbean Sea on November 21, 2011. Although the hazard level was recently lowered, the potential for reoccurring eruptions remains quite real. 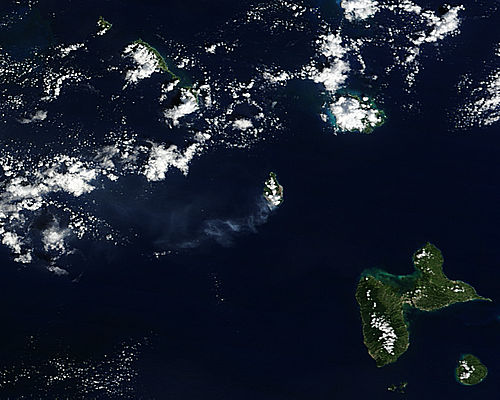 On November 4, the National Disaster Preparedness and Advisory Committee reduced the hazard level from 3 to 2, which allows day-time access to Zone C – an area considered relatively safe to travel when hazard is lower. The Montserrat Volcano Observatory advised that the volcano is in a continued state of pause which is now the longest since the eruption began in 1995. The current pause began on February 11, 2010, when the dome collapsed. There has been a continued decrease in rock fall and pyroclastic flows since that time. The previous longest pause (625 days) occurred between 1998 and 1999.

The Soufriere Hills volcano covers the southern half of Montserrat, a small island in the West Indies. Its first historic eruption started in 1995 and is still ongoing. By late 1997 pyroclastic flows and hot ash had destroyed nearly 80% of the capital city, Plymouth. Once home to 4,000 people and the seat of government and business, the town was buried under 1.4 meters (4.6 feet) of ash and was abandoned. The entire southern half of the island was declared an “exclusion zone”, because of the dangers of the ongoing eruptions and the government of the island was moved to Brades. 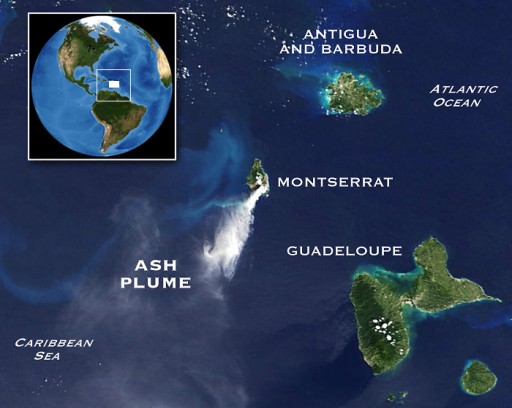 The long-term eruption of Soufriere Hills has consisted of small-to-moderate ash eruptions accompanied by lava-dome growth and pyroclastic flows. Reportedly, non-eruptive seismic events, termed “failed eruptions” had occurred at Soufriere Hills volcano in the 1890’s, 1930’s, and 1960’s. However, except for an eruption around 1630 AD that produced the Castle Peak lava dome, no eruptions other than the current one have been witnessed on Montserrat. (MODIS)