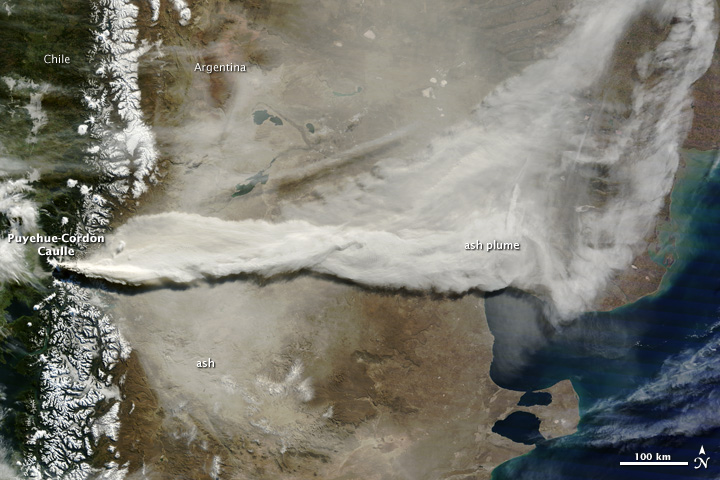 Perhaps the greatest danger posed by the erupting Puyehue-Cordón Volcano Complex in Chile is the thick layer of ash being deposited east of the volcano. This image, taken on June 13, 2011, by the Moderate Resolution Imaging Spectroradiometer (MODIS) on the Terra satellite, shows ash on the ground and a large plume streaming east from the volcano. 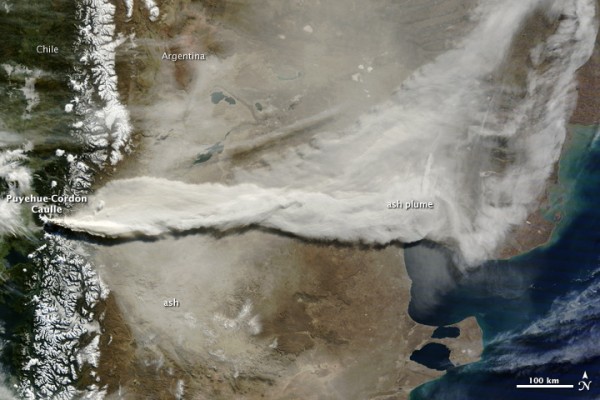 The pale tan coating of ash on the ground has been accumulating since June 4, when the eruption started. The Chilean Service of Minerals and Mining (SERNAGEOMIN) warned that when winter rains begin to fall in the coming weeks, the loose ash could create dangerous landslides and lahars, particularly in ash-clogged river valleys in the Andes Mountains.

The image above also shows a large plume of volcanic ash blowing about 800 kilometers east and then northeast over Argentina. The plume has disrupted air traffic as far away as New Zealand.

Ash from Puyehue-Cordón Caulle over Australia and New Zealand 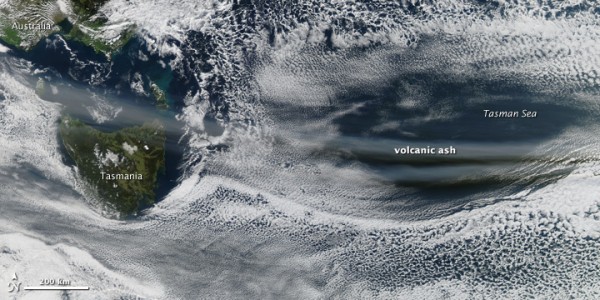 The eruption at Chile’s Puyehue-Cordón Caulle Volcanic Complex sent clouds of ash high into the atmosphere, above the weather that usually breaks up such plumes. The CALIPSO satellite recorded the plume 15 kilometers (50,000 feet) above the Earth on the second day of the eruption, and the volcano continues to push ash into the atmosphere. At these high altitudes, the ash entered the jetstream and blew quickly eastward.

By June 13, when the Moderate Resolution Imaging Spectroradiometer (MODIS) on the Aqua satellite acquired these images, a concentrated plume was visible more than half a world away over Australia and New Zealand. The top image shows the ash plume over southern Australia and the Tasman Sea, while the lower image provides a view farther east over New Zealand and the South Pacific Ocean. 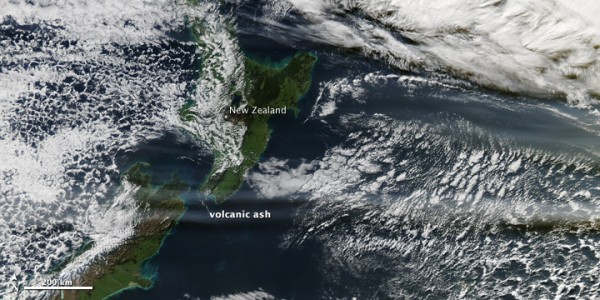 The Civil Aviation Authority of New Zealand warned pilots that the ash cloud was between 20,000 and 35,000 feet (6 to 11 kilometers), the cruising level for many aircraft. Because volcanic ash can damage a jet engine, flight traffic in parts of Australia and New Zealand was canceled or diverted to lower altitudes.