More than 2 million Afghans are at risk of hunger and many are bracing to be stranded for months without help as the country prepares for a harsh winter. Save the Children and Oxfam agencies called for a redoubling of the aid effort to reach people in need before the onset of heavy snows cut off huge swathes of the country. Typical Afghan weather patterns mean that those living in mountainous areas- up to half of the affected population –will almost certainly soon be cut off from help as winter closes in.

Families from 14 drought-affected provinces have not been able to grow enough wheat to feed themselves over the winter due poor rains earlier this year. According to a UN assessment, in some provinces almost 100 per cent of the harvest has been destroyed, and food prices have soared, with the price of wheat in some areas doubling on average since this time last year. 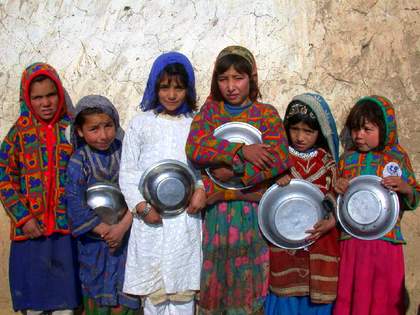 Families are coping by cutting down their meals, borrowing money and even moving to Iran or Pakistan. Some 90 per cent of households in the affected area are now living in debt after borrowing money to buy food, and schools have closed as children are being put out to work. Food, clean water and extra healthcare made available in the next few weeks will be critical as families face the risk of rising rates of disease and malnutrition that will hit the poorest and most vulnerable hardest.

Snow is already falling and many mountainous areas, complicating access to areas hit hardest by drought. Villagers who are used to hardship are telling us that this year the drought has destroyed everything. Their food stocks are already low, and they are worried about how they will get through the coming months. (ReliefWeb)

An Antarctic blast of icy air is forecast to bring snow and subzero temperatures to southeast Australia this weekend, with hail possible in some regions. According to the Bureau of Meteorology (BOM), the first cold front will arrive Friday, April 9, followed by a...