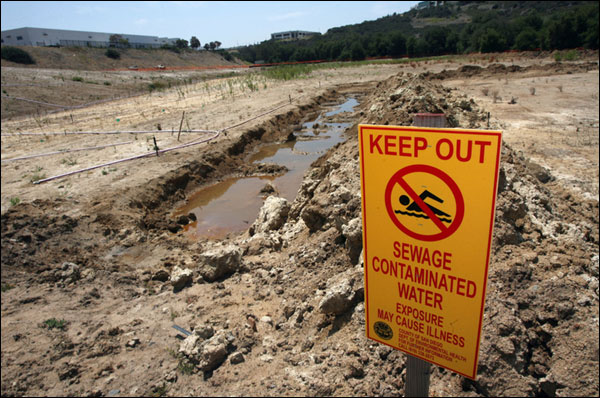 1.9 million gallons of raw sewage spilled into Los Penasquitos Lagoon according to Mark McPherson, the county’s chief of land and water quality. Officials shut down about 10 miles of beaches north of Scripps Pier through Del Mar and Solana Beach. A second spill of 120,000 gallons into Sweetwater River, which flows into the southern part of San Diego Bay, closed Pepper Park and Bayside Park and the San Diego Bay area accessed from Silver Strand. Some of the pump stations don’t have backup power, leading to an overflow of sewage during the outage.

Officials are requiring various neighborhoods throughout San Diego County to boil water prior to consumption to ensure its safety, the city’s water department said in a statement Friday.

San Diego was urged to be cautious with water until further notice, and residents in Scripps-Miramar, Tierrasanta, San Carlos, Bernardo Hights, Scripps Ranch, La Jolla-Soledad, Otay Mesa, and the College grove areas are ordered to boil water prior to consumption.

Reduced water pressure throughout the San Diego County may allow for possible contamination, according to city officials. Defunct generators in the area had caused water pressure to significantly reduce, causing a high likelihood of backflow from homes and businesses. As water flows back into clean supply, the chance for contamination is high. 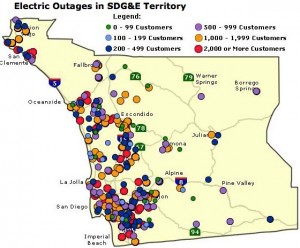 Cities throughout San Diego County are urged to reduce the use of water Friday and throughout the weekend, and to use boiled water, or opt for bottled or filtered options until further notice.

According to SDG&E, the power outage began with a major transmission outage in western Arizona that caused a loss of power to southern California.  Shortly afterward, the San Onofre Generating Station went off line.  As a result, SDG&E did not have adequate resources on its system to keep power on across its service territory.