New Southeast Crater of Etna produced its tenth paroxysmal eruptive episode of the year during the forenoon of 12 August 2011. This event was, in its main characteristics, a repetition of its predecessors, with the emission of a lava flow toward the Valle del Bove, lava fountains several hundred meters high, and an eruption column that rose about 3 km above the summit. The ash plume was then blown southeastward, causing ash and lapilli falls in an area including the town of Zafferana and the coastal strip between Giarre and Acireale. 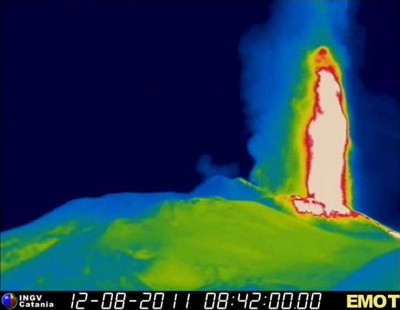 At daybreak on 11 August 2011, sporadic ash emissions were observed at the New Southeast Crater, producing small pluffs of grayish brown ash. The visible light and thermal surveillance cameras of the INGV-Catania did not show any hot material in these emissions until late afternoon, when, after a short hiatus, the emissions resumed producing thermal anomalies. After sunset, small Strombolian explosions were observed at intervals of a few tens of minutes; this activity continued without variations during the night.

At about 05.30 GMT on 12 August, the Strombolian activity began to intensity, accompanied by an increase in the volcanic tremor amplitude, and the shift of the location of the volcanic tremor source from its previous position below the central summit area toward the Southeast Crater, migrating from greater to shallower depth. After  07.30 GMT, the Strombolian explosions produced dark ash puffs, and at 07.50 GMT, lava started to overflow the eastern rim of the crater, through a deep breach left open by the lava overflows of the previous paroxysms. 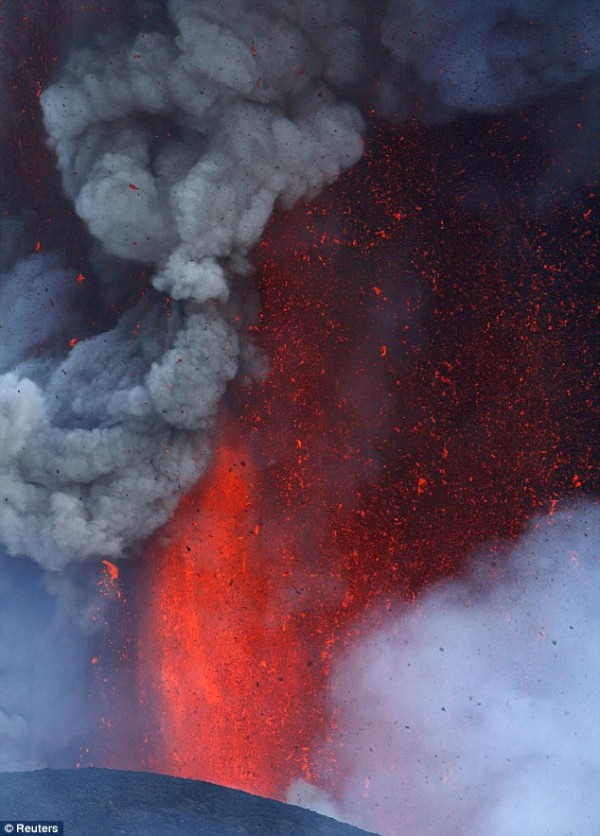 During the following 30 minutes or so, the Strombolian activity rapidly intensified, passing, at about 08.30 GMT, into a pulsating fountain about 100 m tall. Fifteen minutes later, a dense column of ash rose above the lava fountain, while the entire cone surrounding the New Southeast Crater was subjected to heavy fallout of large bombs and blocks.

Sustained lava fountaining and formation of an eruption column were most intense during the interval between 08.45 and 10.00 GMT, when three vents were active within the crater, two in its central portion and one close to the breach in its eastern rim. Shortly after 10.00 GMT, the two vents in the center of the crater emitted only ash, while the more easterly vent continued to launch jets of incandescent lava until 10.25. This was followed by a long phase of ash emission, which was often passive but at times more forceful; this activity completely ceased around 11.00 GMT.

The lava produced by this paroxysm descended on the western slope of the Valle del Bove, dividing into numerous lobes; the most advanced lava fronts reached the base of the steep slope above Monte Centenari. Ash and lapilli falls affected a relatively narrow sector between Zafferana and the coastal area between Giarre and Acireale, on the southeast flank of Etna.

Once more, the pyroclastic cone surrounding the New Southeast Crater underwent rapid growth, especially on its southeastern rim. The interval between this paroxysm and its predecessor was 6.5 days, slightly longer than the previous interval; it is notable, however, that since 19 July the intervals between the eruptive episodes have been very regular, varying between 5.5 and 6.5 days. (INGV Sezione di Catania) 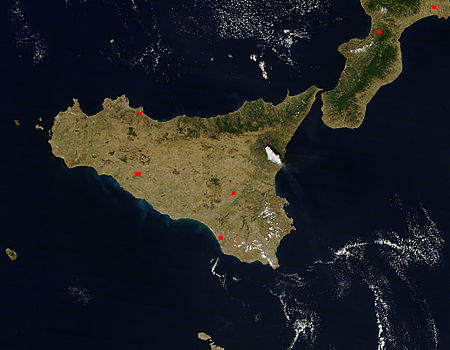 Throughout 2011, activity at Sicily’s Mount Etna has been characterized by paroxysms: short, violent bursts of activity. Each event has included volcanic tremors, ash emissions, and lava flows centered around the New Southeast Crater, just below the summit.

On August 12, 2011, Etna had its tenth paroxysm of the year, captured in this natural-color satellite image. Etna spewed a thick white plume of gas and ash to the southeast, towards the nearby city of Catania. The ash cloud was produced by vigorous lava fountaining at the New Southeast Crater. The Toulouse Volcanic Ash Advisory Center estimated ash emissions reached an altitude of 14,000 feet (4,300 meters); 2,000 feet (600 meters) above the 10,925-foot (3,330-meter) summit. The image was captured at 11:40 a.m. local time by the Moderate Resolution Imaging Spectroradiometer (MODIS) aboard the Terra satellite. (MODIS) 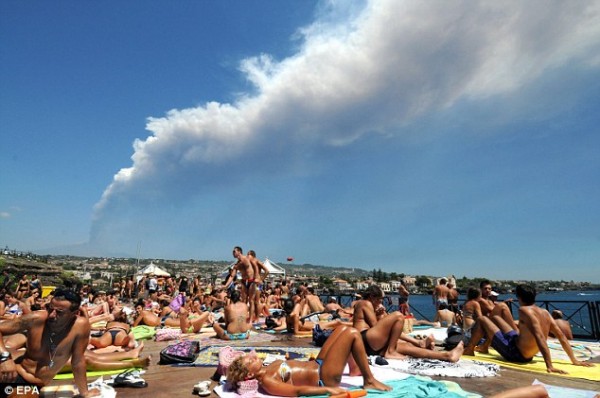