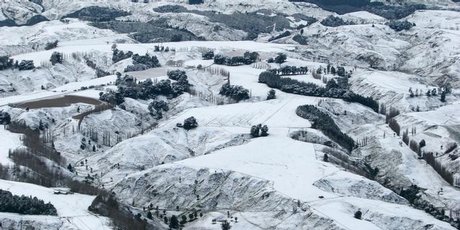 New Zealand was hit by very rare snowfall and polar blast. Snowfall covering far-flung areas of New Zealand as of Monday has been described as a once in a 50-year event by the New Zealand MetService.

On the North Island, the storm left a mantle of snow over the hills above Wellington, while the snowflakes sighted in Auckland marked the first time since the mid-1970s, according to a number of news outlets.

Snow, some heavy, also hit the South Island, including Christchurch and Dunedin. Hills in the Wellington area had reported snowfall of at least 11 cm (4.3 inches) in Upper Hutt.

There were warnings to be aware of black ice, which is very unusual in most of New Zealand. Major highways on both islands became impassable during the storm.

Grounding of flights stranded hundreds of passengers at Christchurch, Queenstown, and Dunedin. Schools and other services were affected and power was cut to some areas by fallen trees and power lines.

Hospitals in the Auckland region have been busy, but Middlemore in South Auckland has been worst affected by a surge that began at the weekend, leaving it with no spare beds onwards and longer-than-usual waits in the emergency department. The cold weather had contributed to the increased number of patients. It was associated with an increase in the number of patients with respiratory infections, including influenza. (NZH)

Climate scientist Georgina Griffiths of the National Institute of Water and Atmospheric Research said yesterday was the coldest day ever recorded in Auckland. The temperature got up to only 8.2 °C (46.7 °F) – compared with the previous lowest high of 8.7 °C (47.6 °F) registered on July 4, 1996.

The last time snow settled on the ground in the city was 1939. It fell to ground level at the airport in 1976.

Underlying the abnormal cold and snow was an unusually strong, direct blast of Antarctic air aimed squarely upon the island nation. The bitterly cold polar blast that blanketed much of the South Island in snow and brought record low temperatures to Auckland is set to ease over the next few days, forecasters say. Metservice said threats of intense snow will lower as a ridge approaches from the Tasman Sea and moves onto southern New Zealand tomorrow. (NZH)