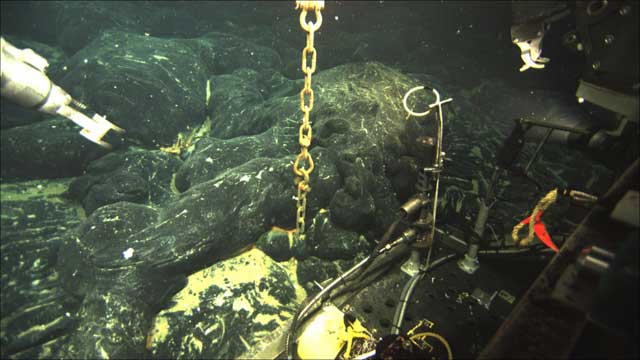 An undersea volcano has erupted off the coast of Oregon, spewing forth a layer of lava more than 12 feet (4 meters) thick in some places, and opening up deep vents that belch forth a cloudy stew of hot water and microbes from deep inside the Earth.

Scientists uncovered evidence of the early April eruption on a routine expedition in late July to the Axial Seamount, an underwater volcano that stands 250 miles (400 kilometers) off the Oregon coast. 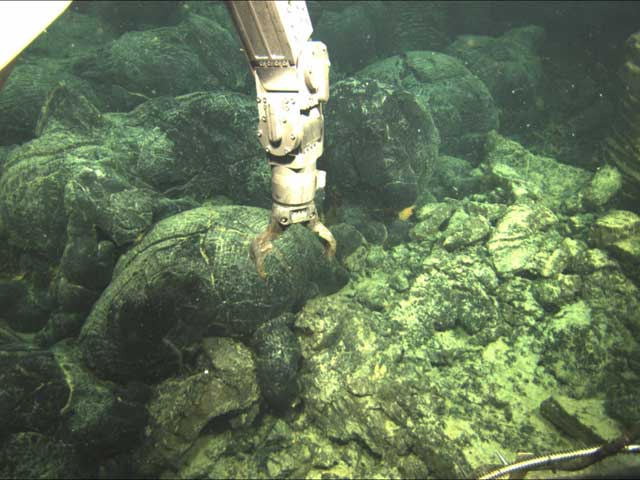 The discovery came as a surprise, as researchers attempted to recover instruments they'd left behind to monitor the peak a year earlier. When the researchers hefted a seafaring robotic vehicle overboard to fetch the instruments, the feed from the onboard camera sent back images of an alien seafloor landscape. In addition to producing hardened lakes of blobby lava, in places more than a mile (1.6 km) across, the eruption changed the architecture of the region's seafloor hot springs.

"There are more vents, they're higher temperature, and there are microbes living in them that are usually deep in the crust that come up to the surface in these events," said Bill Chadwick, a geologist with Oregon State University.

The Axial Volcano rises 3,000 feet (900 m) above the seafloor, the most active of a string of volcanoes along the Juan de Fuca Ridge, a plate boundary where the seafloor is slowly pulling apart. 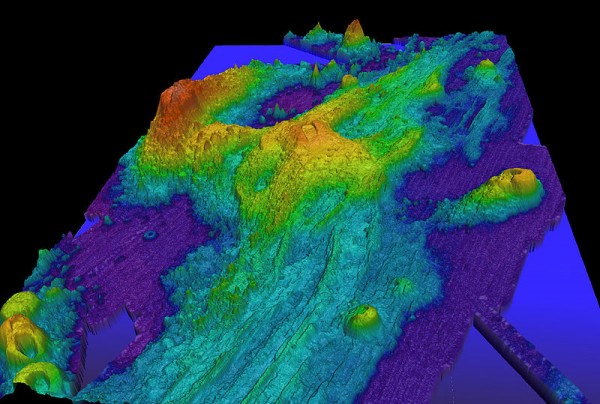 Chadwick and colleagues have been keeping tabs on the peak since it last erupted in 1998. Thanks to a monitoring system they developed to measure the mountain's minute movements, the team predicted the volcano was due for another eruption sometime between 2011 and 2014. The instruments kept track of the movement of the seafloor, which very gradually inflates and deflates like a giant, magma-filled balloon, collapsing suddenly after an eruption, and rising, in this case, by about 6 inches (15 cm) per year in the lead up to an eruption. 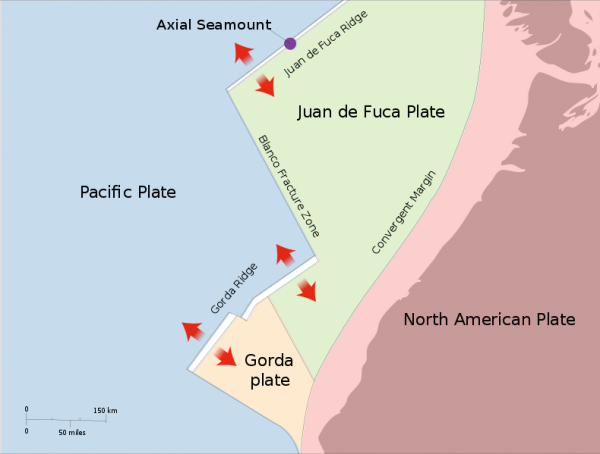 Scientists have long known about the existence of subsea volcanoes, but information on their behavior is relatively sparse. Eruptions were first observed in the 1990s, and, although technology has improved, getting to the underwater peaks to study them is difficult. Data from the Axial Seamount's recent eruption will provide the first long-term picture of a subsea volcano from one eruption to the next.  Scientists are still trying to figure out how seafloor volcanoes differ from their terrestrial counterparts.

It could be it's easier to predict ocean eruptions. It's possible that because the crust is thinner there, and magma is in ready supply, the mountains' slow inflations provide a good analogue for knowing when eruptions will occur. However, scientists cautioned that a single successful prediction wasn’t enough to forecast what the future holds. (OurAmazingPlanet)

A network of underwater microphones, originally planted to detect enemy submarines, in April has picked up what scientists believe is an erupting underwater volcano 130 miles off the Oregon shore.  The location of the active volcano appears to be in the Gorda tectonic ridge, about 2 miles below the ocean's surface. The ridge is part of a seafloor spreading system that wraps around the world's ocean floors for about 46,000 miles. (ABCNews) 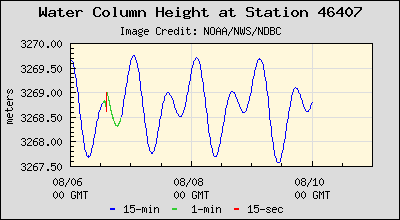 Axial Seamount rises 700 m above the mean level of the central Juan de Fuca Ridge crest about 480 km west of Cannon Beach, Oregon to within about 1400 m of the sea surface. The volcano is the most magmatically robust and seismically active site on the Juan de Fuca Ridge between the Blanco Fracture Zone and the Cobb offset. The summit is marked by an unusual rectangular-shaped caldera (3 x 8 km) that lies between two rift zones. The caldera is breached to the SE and is defined on three sides by boundary faults of up to 150 m relief. Hydrothermal vents colonized with biological communities are located near the caldera fault or along the rift zones. Following the discovery of hydrothermal venting north of the caldera in 1983, a concentrated mapping and sampling effort was made in the mid-late 1980s. An eruption was detected seismically in January 1998; later mapping revealed a lava flow erupted from a 9-km-long fissure at the southern end of Axial caldera. The new lava flows were seen to partially bury a seismometer/ pressure gauge and mooring line deployed in 1997. (GlobalVolcanismProgram)