A new underwater volcano formed near the island of Mayotte in the Indian Ocean in 2018, which was confirmed in May 2019. Now, an international team of scientists is unraveling the dramatic events that led to its creation. It is the deepest and largest magma reservoir in the upper mantle to date, which is beginning to empty abruptly, the researchers said. However, since the seabed lies 3 km (2 miles) below the water surface, almost nobody noticed the enormous eruption.

Since May 2018, an unusual series of earthquakes started being registered off the coast of the island of Mayotte, the oldest volcanic island in the Comoros Basin grouping.

An entirely new form of earthquake signal has emerged since June 2018– it was so powerful that it could be recorded thousands of kilometers away. The signals lasted up to 30 minutes and were characterized by particularly harmonic, low frequencies, almost monochromatic. They are similar to a large bell or a double bass and are called Very Long Period (VLP) signals.

Despite the seismic activity's center being 35 km (22 miles) offshore the east coast of the island, a continuous lowering and eastward motion of the earth's surface started at the same period as the massive swarms of VLP signal begun, accumulating to roughly 20 cm (8 inches) to date.

Scientists led by Simone Cesca from Germany's GeoFrorschungsZentrum (GFZ) examined seismological and geodetic data from the region to further study the observations and their evolution. However, there was no seismic network on the seafloor, complicating the investigations.

"We tried to improve the unfavorable initial situation by developing special new analytical methods such as cluster and directional beam methods," Cesca stated.

The team determined different activity phases within the series of events from May 2018 up to the present. The initial swarm period specified a quick upward movement of magma from a deep mantle reservoir over 30 km (19 miles) below the surface. 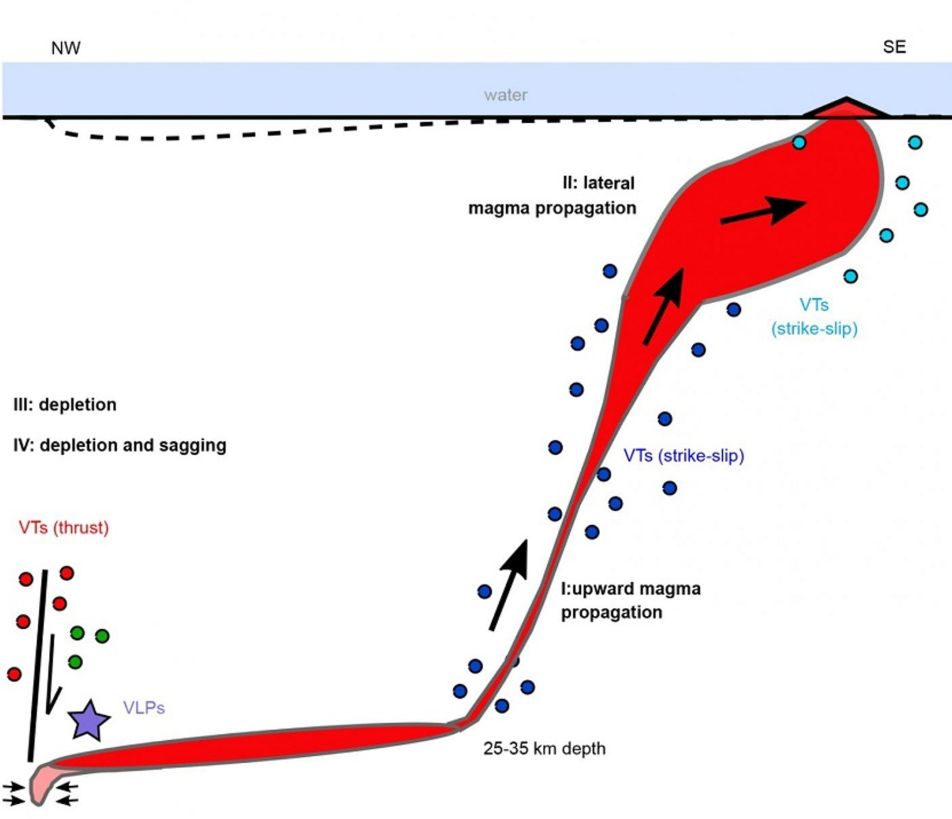 The magma then started to flow once an open channel had formed from the mantle to the seabed. An oceanographic campaign confirmed in 2019 the birth of the underwater volcano, whose location concurs with the reconstructed magma rise.

The apparent tectonic termor activity lessened again in this phase, while the lowering of the ground on the island started. Similarly, long-lasting mono-frequent VLP signals began.

"We interpret this as a sign of the collapse of the deep magma chamber off the coast of Mayotte," said co-author Eleonora Rivalta. "It is the deepest and largest magma reservoir in the upper mantle to date, which is beginning to empty abruptly."

"Since the seabed lies 3 km (2 miles) below the water surface, almost nobody noticed the enormous eruption," said Torsten Dahm, Head of the section Physics of Earthquakes and Volcanoes at the GFZ.

"However, there are still possible hazards for the island of Mayotte today, as the Earth's crust above the deep reservoir could continue to collapse, triggering stronger earthquakes."

The dynamics of magma deep in the Earth’s crust are difficult to capture by geophysical monitoring. Since May 2018, a seismically quiet area offshore of Mayotte in the western Indian Ocean has been affected by complex seismic activity, including long-duration, very-long-period signals detected globally. Global Navigation Satellite System stations on Mayotte have also recorded a large surface deflation offshore. Here we analyse regional and global seismic and deformation data to provide a one-year-long detailed picture of a deep, rare magmatic process. We identify about 7,000 volcano-tectonic earthquakes and 407 very-long-period seismic signals. Early earthquakes migrated upward in response to a magmatic dyke propagating from Moho depth to the surface, whereas later events marked the progressive failure of the roof of a magma reservoir, triggering its resonance. An analysis of the very-long-period seismicity and deformation suggests that at least 1.3 km3 of magma drained from a reservoir of 10 to 15 km diameter at 25 to 35 km depth. We demonstrate that such deep offshore magmatic activity can be captured without any on-site monitoring.