International seismic networks detected an atypical very low frequency signal originating near the island of Mayotte just before 09:30 UTC on November 11, 2018. Signals of this type are characteristic of volcanic phenomena.

A rare earthquake swarm started near the small Indian Ocean island of Mayotte, the oldest volcanic island in the Comoros Basin, at 05:14 UTC on May 10, 2018 and continues to date.

According to the BRGM, the France-based geological agency serving the territory, the first quake felt by the population hit at 23:19 UTC, May 10 and had a magnitude of 4.5.

"The appearance of this earthquake swarm in May 2018 took scientists by surprise," BRGM said. "Geological knowledge of the swarm zone is limited, but a clearer understanding of the phenomenon is emerging as observations continue. Different hypotheses as to their causes have been investigated."

In addition to the seismic measurements used to track how this swarm is evolving, new data were analyzed in October and November 2018, especially those on deformation of the island's surface (GPS measurements by the IGN). The team working at the Geology Laboratory of the Ecole Normale Supérieure in Paris has shown that the current phase in the swarm is accounted for by a volcanic component.

In parallel, on November 11, 2018, an atypical very low frequency signal was detected by the international networks around the world. The signal repeated in a wave about every 17 seconds, lasting for about 20 minutes in total.

Signals of this type are characteristic of volcanic phenomena, BRGM scientists say. 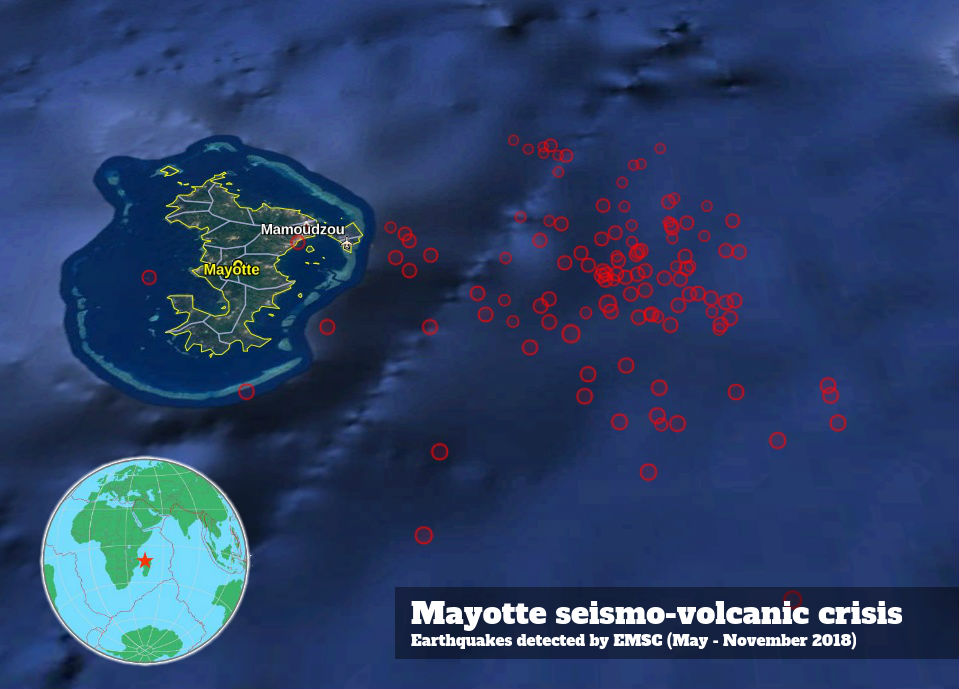 "These observations therefore back up the hypothesis of a combination of tectonic and volcanic effects accounting for a geological phenomenon involving a seismic sequence and a volcanic phenomenon.

However, this hypothesis will need to be confirmed by future scientific studies.

"The location of the swarm is on the edge of the geological maps we have," said Nicolas Taillefer, head of the seismic and volcanic risk unit at BRGM. "There are a lot things we don't know."

Since mid-July, GPS stations on the island have tracked it sliding more than 61 mm (2.4 inches) to the east and 30 mm (1.2 inches) to the south, according to data from the Institut National de L’information Géographique et Forestière.

Using these measurements, Pierre Briole of the Ecole Normale Supérieure in Paris estimated that a magma body that measures about 1.4 km3 (0.3 mi3) is squishing its way through the subsurface near Mayotte. 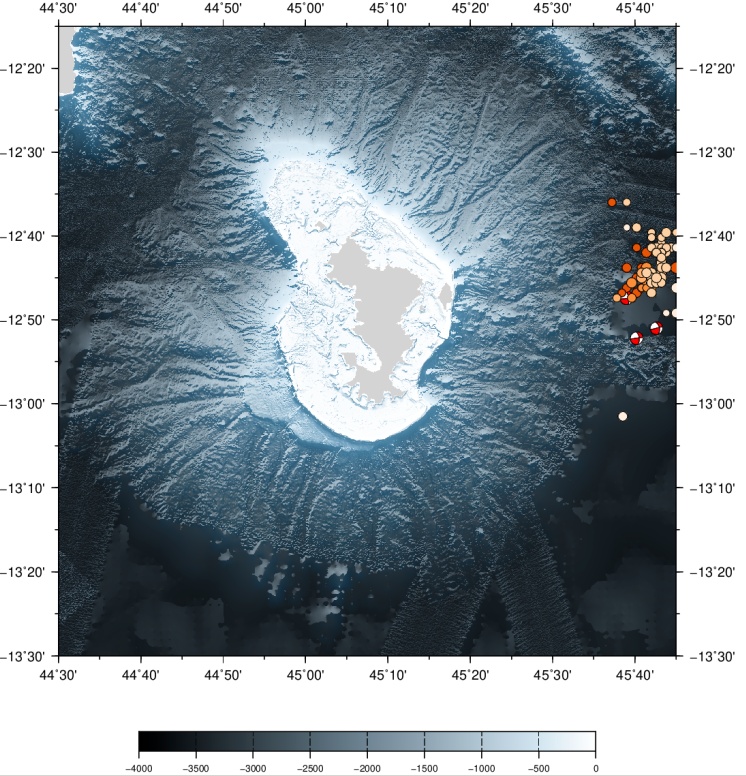 In the last few months, the scientific community has joined forces to understand the phenomenon and provide answers to the questions it is raising. Possibilities are being investigated for the deployment of new instruments on land and at sea to improve earthquake detection and location.

An oceanographic campaign involving numerous scientific institutes (BRGM, Strasbourg and Paris Institutes of Earth Physics, Paris Sorbonne, Ecole normale supérieure de Paris, Ifremer) has also been applied for, to explore both the swarm zone and the regional context and to produce more data to better understand the causes of the phenomenon. (BRGM)

Mayotte Island in the Mozambique Channel between the northern tip of Madagascar and the eastern coast of Africa consists of two volcanoes with diverse geochemistry that were active from the Pliocene to the Holocene.