A swarm of earthquakes began beneath the south part of Kilauea caldera, Hawaii on August 24, 2021, with a particularly strong sequence that occurred at about 11:30 UTC, the USGS Hawaiian Volcano Observatory (HVO) reports. As a result, HVO has raised the volcano alert level/aviation color code for Kīlauea from Advisory/Yellow to Watch/Orange. As of 15:34 UTC on August 24, the volcano is not erupting.

The activity began at about 02:30 UTC today and was coincident with a change in the style of ground deformation at tiltmeters in the Kīlauea summit region, potentially indicating the shallow movement of magma beneath the south part of Kīlauea caldera.

"At about 01:30 HST (11:30 UTC) this morning, the swarm of earthquakes intensified in this region and was accompanied by an increase in the rate of ground deformation recorded by the Sandhill tiltmeter, just to the west of the earthquake swarm location," HVO said in a press release.1

The same tilt increase was also recorded by the tiltmeter near Uēkahuna Bluff and the site of the old HVO building.2

These observations may indicate a small dike intrusion of magma occurring 1 – 2 km (0.6 – 1.2 miles) beneath the south caldera.

More than 140 earthquakes have been recorded by 12:30 UTC with the largest recorded M3.3. The majority of earthquakes so far were below magnitude 1. 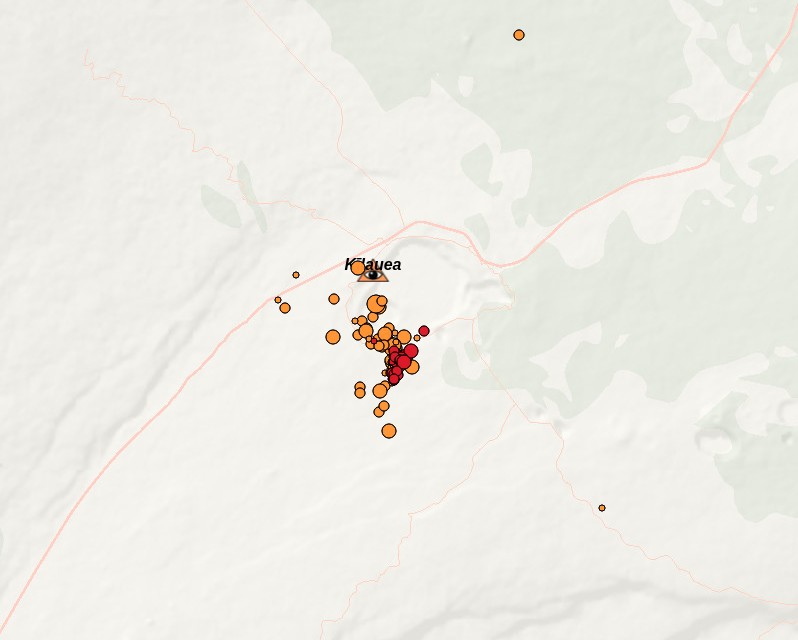 Currently, webcams show no evidence of lava at the surface.