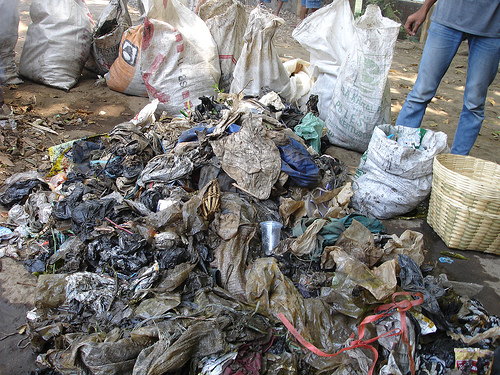 Once renowned for its pristine beaches, Untung Jawa Island, just an hour’s boat ride from Jakarta, is now known as “trash island.” With hundreds of tons of stryofoam, plastic and the occasional dead body washing ashore, the locals have had enough.  Untung Jawa is part of the Thousand Islands, a string of 105 tropical islands in the bay of the Jakarta. Once a popular tourist destination, thirteen heavily polluted rivers that flow from Jakarta harbor out to the islands mean they are now being hit by daily waves of trash.

Between the island’s two harbors hangs a 100-meter-long net designed to trap the mountain of styrofoam and plastic that pours in every day. An average of 100 tons washes up on the island, made worse every day by strong easterly winds that carry more rubbish from the bustling metropolis of nearly 10 million people, whose sewage system is almost non existent. The situation has reached a crisis point. The smell of rotting, salty trash fills the air in Untung Jawa even with the 11 official beach cleaners working hard all day. 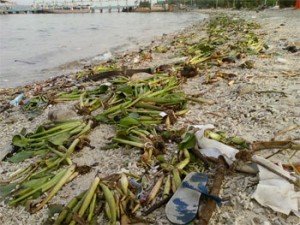 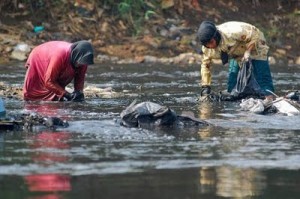 There are, however, mounds of rubbish on Untung Jawa that can’t be recycled and most of it ends up in a government-run incinerator.  With the constant waves of trash, village authorities  says the the governments of Jakarta and West Java should do more to stop the rubbish at the source. (Asia Sentinel) 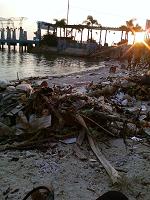 Thirteen heavily polluted rivers flow into the Jakarta harbour and then out to sea washing ashore on small islands off the coast that are popular tourist spots.

Untung Jawa is the closest island to Jakarta. It has long been a popular tourist spot—where people come to swim, snorkel or just walk around the island. But the waves of trash are ruining this once beautiful tropical island. A smell of rotting trash that has floated for days in salty water fills the air. (AsiaCalling)