Plastic debris in the marine environment is well known and widely documented, but the quantity of plastic making its way into the world’s oceans and from where it originates has been a mystery until now.

A new study published today in the journal Science, quantifies the input of plastic waste from land into the ocean and offers a roadmap for developing ocean-scale solutions to the problem of plastic marine pollution. The research was conducted by a scientific working group at UC Santa Barbara’s National Center for Ecological Analysis and Synthesis (NCEAS) with support from the Washington, D.C.-based Ocean Conservancy.

To conduct the research, lead author Jenna Jambeck, an environmental engineer at the University of Georgia, coordinated contributions from experts in oceanography, waste management and plastics materials science. 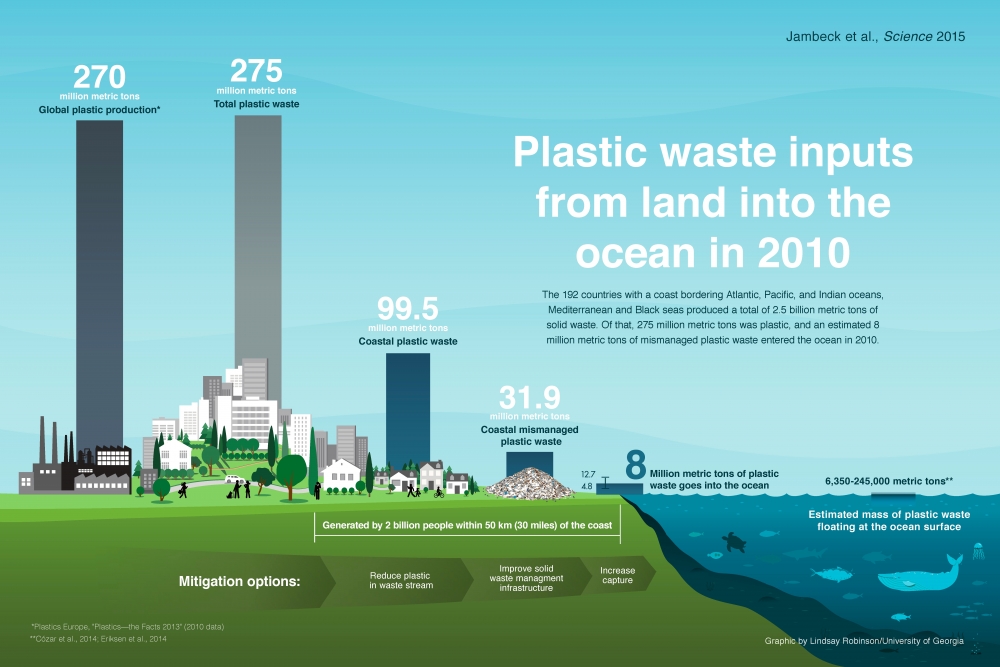 “Using the average density of uncompacted plastic waste, 8 million metric tons — the midpoint of our estimate — would cover an area 34 times the size of Manhattan ankle-deep in plastic waste,” said co-author Roland Geyer, an associate professor at UCSB’s Bren School of Environmental Science & Management. “Eight million metric tons is a vast amount of material by any measure. It is how much plastic was produced worldwide in 1961.”

According to the study, countries with coastal borders — 192 in all — discharge plastic into the world’s oceans with the largest quantities estimated to come from a relatively small number of middle-income, rapidly developing countries. In fact, the investigators found that the top 20 countries accounted for 83 percent of the mismanaged plastic waste available to enter the ocean. They went on to say that reducing the amount of this waste by 50 percent would result in a nearly 40 percent decline in inputs of plastic to the ocean.

“Large-scale removal of plastic marine debris is not going to be cost-effective and quite likely simply unfeasible,” said Geyer. “This means that we need to prevent plastic from entering the oceans in the first place through better waste management, more reuse and recycling, better product design and material substitution.”

This global map shows the estimated mass of mismanaged plastic from each coastal country. The darker the color, the larger the amount. Countries shaded in white were not included.

Knowing how much plastic is going into the ocean is just one part of the puzzle. Millions of metric tons reach the oceans, yet researchers are finding between 6,350 and 245,000 metric tons floating on the surface — a mere fraction of the total. This discrepancy is the subject of ongoing research.

“Right now, we’re mainly measuring plastic that floats,” said study co-author Kara Lavender Law, a research professor at the Massachusetts-based Sea Education Association. “There is a lot of plastic sitting on the bottom of the ocean and on beaches worldwide.”

The NCEAS working group forecasts that the cumulative impact to the oceans could be as high as 155 million metric tons by 2025. However, the planet will not reach global “peak waste” before 2100, according to World Bank calculations. “We’re being overwhelmed by our waste,” Jambeck said.

“The numbers are staggering, but as the group points out, the problem is not insurmountable,” said NCEAS Director Frank Davis, who is also a professor at UCSB’s Bren School. “The researchers suggest achievable solutions that could reverse the alarming trend in plastics being dumped into our oceans.”

Among them, according to the study, are waste reduction and “downstream” waste management strategies such as expanded recovery systems and extended producer responsibility. According to the researchers, while infrastructure is being built in developing nations, “industrialized countries can take immediate action by reducing waste and curbing the growth of single-use plastic.”